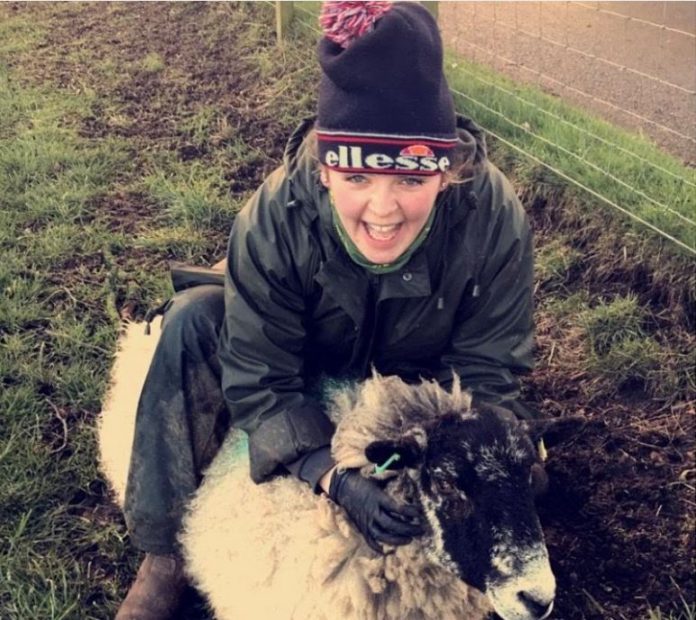 Annie McGuinness may have been raised on a farm steeped in family tradition, but it was only when she attempted to pursue a career in other sectors, that she realised where her passion lies.

Throughout school, the 22-year-old Mountain Park, Carlingford, Co. Louth native set her sights on becoming a guard or a PE teacher.

“I did have the farm at home and worked on it whenever I got the chance, but I was always told there’s no future in farming so I never saw myself pursuing it as a full-time career,” she explained to Catherina Cunnane, editor of That’s Farming.

With a belief that she would not secure sufficient points to become a PE teacher, without venturing overseas, she applied for forensic science in GMIT.

“I genuinely didn’t expect to get enough points for it, so I was shocked when I received this offer. I felt I was not ready to go to college, so I ended up doing sports recreation and exercise in DIFE.”

“I have a huge passion for sport and coaching others and was a sports captain in school. After doing my work placement in a gym, I realised it was not for me. I loved the aspect of coaching people and helping them, but I hated being indoors 24/7.”

“I wanted to be outdoors – I was always working on the farm in the evenings and during the weekend and I truly enjoyed it, so that is when everything changed.”

She applied through the CAO for a second time in 2017, this time listing GMIT/Mountbellew’s level-8 agricultural science and environmental management degree programme as her first choice.

“I didn’t even go to the open day in Mountbellew but I went to a careers day in the RDS where I met a college rep and he told me all about their courses,” added Annie, who began her studies in 2017 and will graduate next year.

Students who enrol in this course spend two years at Mountbellew for practical modules, while on Wednesdays, they venture to GMIT for laboratory-based practicals.

In second year, students spend two days in GMIT and begin their three-month work placement module after Christmas, while they are based at GMIT for third and fourth year.

“Due to Covid-19, all lectures will be delivered online and practicals will be on-campus. This is a very important year as we have our thesis to do so I hope it all goes to plan.”

Annie completed placement at Park House Farm, a mixed sheep dairy, beef, and tillage enterprise, in February 2019, where she remained for a total of eight months.

“I was supposed to be there for three months, but I got on extremely well with the farm owners and they asked me to stay on. I went back again during this summer for three-and-a-half-months.”

“I was supposed to go over for a fortnight during my Easter break to assist with lambing but due to the global pandemic, that never happened.”

“My highlight of this course has to be meeting the most amazing friends from all over the country. The opportunity to go on placement was a huge bonus as I made so many connections and gained lifelong skills.”

The 22-year-old is utilising the knowledge she has gained through her studies and placement to improve her home farm, which comprises of over 100-acres.

Lambing takes place from mid-March onwards, with progeny presented for sale from September-December. Lambs are sold to their local butcher, at the mart, or slaughtered.

The farm, parts of which is leased to local tillage farmers, is home to two cob mares, 150 Texel-cross-Suffolk ewes and up to 50 ewe lambs which will join the main flock in the coming years.

“Before I went to England, I feel my father, Nat, a builder by trade, didn’t give me many responsibilities. When I went over there, I was responsible for a large flock of sheep and a herd of cattle.”

“When I came back home and showed my father what I had learned and what I was capable of doing, he let me take control a little bit more.”

“I definitely have a huge say in the decisions that are made on the farm because, at the end of the day, I will be farming the land in the future. When I tell people in work at Fitzpatrick’s Bar and Restaurant that I farm, they are shocked.” the Macra na Feirme member added.

“My earliest farming memories revolve around lambing time. My brother and I had pet lambs that were literally our little children. We used to build castles for them with small square straw bales and even bring them for walks up the roads with a dog collar on.”

“I remember going to the mart with my father from a young age and going to Ballinasloe Horse Fair and Spancil Hill Fair in Co. Clare for years with our cobs.”

Looking ahead, Annie plans to return to the home farm once she completes her undergraduate studies next year.

She is considering completing a H Dip in the future or travelling overseas, but for now, she intends to play a more active role in the home farm, with a view to increasing its efficiency.

“My goal is to own over 500 sheep with the possibility of opening a pet farm in Carlingford in the foreseeable future. I really think there is an opening in the market as it is a top tourist destination in Ireland.”

“Every day I’m on the farm I’m learning something new and all these new things will help me to make decisions in the future which is vitally important,” Annie concluded.