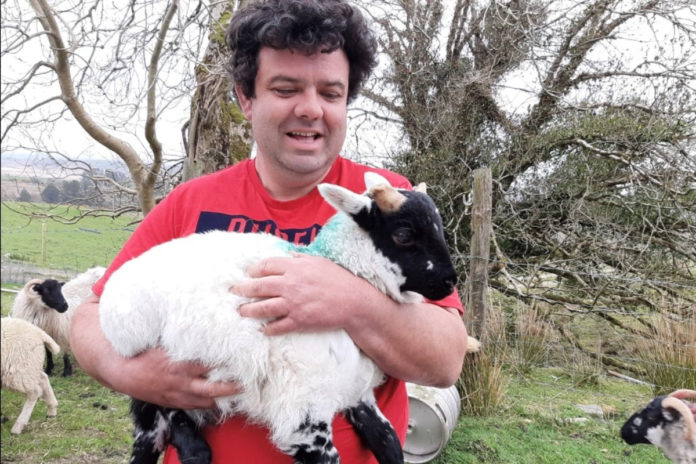 Moycullen farmers planning to sell their own ‘lamb in a box’

Husband and wife team James and Julie Regan farm over 300 sheep and over 50 suckler cows in Moycullen, Co. Galway on a mixture of lowland and upland grazing.

James previously worked as an engineer and still does so on a freelance basis, while Julie recently left her factory job to farm full-time alongside him.

James told That’s Farming’s Cian that he has been farming for almost 12 years now on their land in the village of Moycullen as well as their upland farm in Oldtown, which is a few miles away in the Connemara hills.

“We keep 300 Mayo Black-face and Lanark ewes on the hill and 40 lowland ewes at home. The lowland sheep are mainly second-crosses from the hill, so mainly Texel or Suffolk crossed with the hill sheep.”

When I spoke to James, he was still in the middle of the lambing season which had gone well to that point. This year he witnessed a vast increase in the number of lambs per ewe.

“Crop wise, it has been bigger than previous years because on the lowland we’ve had a good few triplets and on the hill we have had a lot of twins, which is unusual for those sheep.”

Despite having the facilities to lamb his ewes indoors, the Regans have opted to keep them in the fields during the lambing season.

“I find there are less problems this way. I have a sheep shed but I have nearly given up on using it because we had way more problems lambing inside.”

“They tend to be much hardier lambs outside. The good thing is there is a lot of shelter on the land, between bushes and trees, which helps the outdoor lambing.”

Prior to breeding, James kept his ewes grazing a flush of aftergrass on a lowland rented farm. After two weeks here, he introduced 4 Lanark rams to the flock before moving them all to the mountain and adding three more Mayo rams 3 weeks later.

Lamb in a box

The Connemara farmers usually sell their lambs through the mart in the fall of the year but, due to a poor price for store lambs in recent years, James plans to revert to a tactic employed by his father.

“My father used to sell butchered lambs in boxes. Dad has the bar in Moycullen village, and he always used to have customers looking for the lamb, so he used to sell 15 or 20 that way.”

He predicts a big change in the way the consumer views their food after the current crisis, with a much bigger emphasis on traceability and supporting local.

“The way the whole food chain is gone seems a bit crazy to me. I could be selling lambs in Maam cross and next thing they end up in Egypt and then we’re going to supermarkets and buying lamb from New Zealand. This pandemic has highlighted a lot of things like that.”

“I think people are going to want to come back to locally produced and locally sourced food, buying directly from farmers. There will always be a place for supermarkets, but I think a lot of people will be happier to know where it’s coming from and that’s why I want to sell the lamb in the box.”

With extra ground for grazing this year, James told That’s Farming that it makes sense to use the full of the resources at his disposal and finish them. He is hoping to do so with as little inputs as possible.

“When you have grass and you can bring them to December or January, lamb is scarce and the prices are high and you’ll have a bigger weight by then. There won’t be a huge emphasis on meal because when I have nice grass there’s no need to pump them with meal.”

Sucklers on the hill

They also farm around 57 suckler cows, mainly pedigree Aberdeen Angus with a few dairy-cross cows as well. He recently bought an Aubrac heifer and plans to buy more to replace some of the Angus cows.

“We’re breeding everything to Angus and Limousin bulls. I AI what I can myself as well, but it can be tricky on rough grazing to get them in for AI.”

“We put the cattle back the mountain during the summer and you would have to have a bull back there because there’s a huge run of mountain. You’re not going to bring them down for one straw. Only for that, we would do more AI.”

The cattle don’t thrive as well on the hill as they would on lowland ground, according to the Moycullen man, but he finds they exhibit a surge in growth once brought back in for the winter.

Mart closures have meant that he will be farming more cattle this spring, as he would prefer to sell cattle through the mart than privately.

“I’m reluctant to sell without a mart. You could ring an agent and he would come and price them but there’s more security with standing by a ring,” he said.

Anyone planning on farming full-time in the future is advised to see the world first by the sheep and cattle farmer, who said there’s more to be seen than what’s in your immediate surroundings.

“My advice to anyone would be to go out and work on a few farms. I know travel is out of the question at the minute but see a bit of the world and see farming in different places too.”

“Even when I studied in Athenry it was a completely different kettle of fish than Connemara. Myself and my wife went off to South Africa shearing sheep a few years ago as well.”

“You get to see different things and learn different things. It’s not always about what’s going on around you, there’s a bigger world out there to be seen and bring home different ideas. Not all of them will work but you can always take the best and leave the worst.”

The life of a farmer isn’t always an easy one and it takes a certain type of person to appreciate it. Regan said it’s a life he always wanted and a lifestyle that couldn’t be beaten.

“I do like the engineering work and the steel-work, but I just fit that in around farming. Farming is in the veins and it’s always what I wanted to do.”