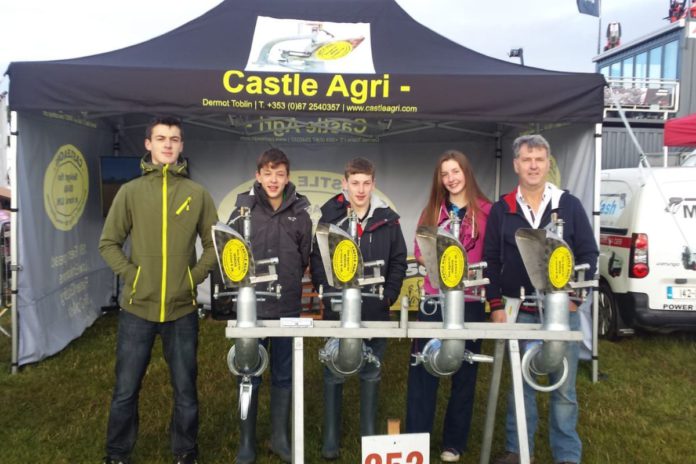 In this week’s machinery segment, That’s Farming, speaks to Dermot Tobin of Castle Agri. Ireland’s and the UK’s sole agent for Moscha Swivel Slurry Spreaders discusses the invention and what he believes is misinformation surrounding slurry spreading.

One Kilkenny farmer’s visit to AGRITECHNICA in Germany seven years ago has changed the way more than 1,000 Irish farmers and agricultural contractors spread slurry.

Dermot Tobin, the owner of Castle Agri, is the sole agent in Ireland and the UK for the Moscha Swivel Slurry Spreader. He claims it is the “most environmentally friendly slurry spreader on the market”.

The Carrick-on-Suir, Co Kilkenny native, has over thirty years of experience in the agricultural field, farming 140 sucklers and 200 ewes on over 200-acres of tillage and grassland.

He trialled the revolutionary invention, which fits to the rear of a slurry tanker and produces slurry droplets, on his mixed enterprise, before selling the bolt-on attachment in Ireland and the UK.

The product is the brainchild of a German farmer, who spent over ten years finetuning what is regarded as a better slurry-spreading technique.

“I bought one of them and undertook a trial for seven months to see what it could do. I was very impressed with the results and became an agent. To date, I have sold 1,600 spreaders, mostly in Ireland,” Dermot Tobin told That’s Farming.

Tobin explained that the basic idea is that the nozzle slows down the speed at which slurry leaves the tanker, thereby creating larger slurry droplets.

Slurry pressure powers the Moscha Swivel Slurry Spreader, which makes it swivel from side to side. It has a spreading width of 16-18 metres.

The operator must keep the product greased and pressure on slurry by setting the bar gauge to one bar.

Dermot spreads slurry at a width of up to 18-metres on his land but explained that this spreading width may differ for smaller tankers but will not go below 15-metres.

Dermot explained how a customer would go about fitting this product to their tanker. He also offers phone support to customers, if required.

“You have to put the bend on your spreader, have it on a level piece of ground, clamp it onto the back of the tank and have it standing up dead vertical.”

“Then, you get the box iron with the T-piece, put it into the two lugs of the spreader, and that fits between the two flat plates. You may have to cut off an inch, depending on your tanker.” 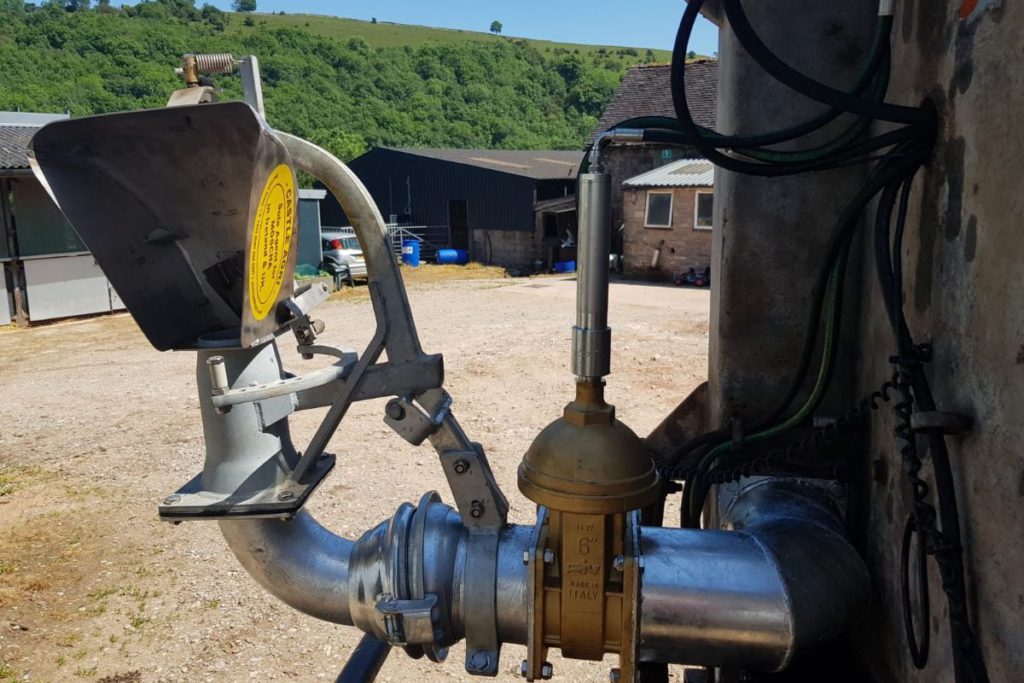 The benefits of this product, he pointed out, include:: 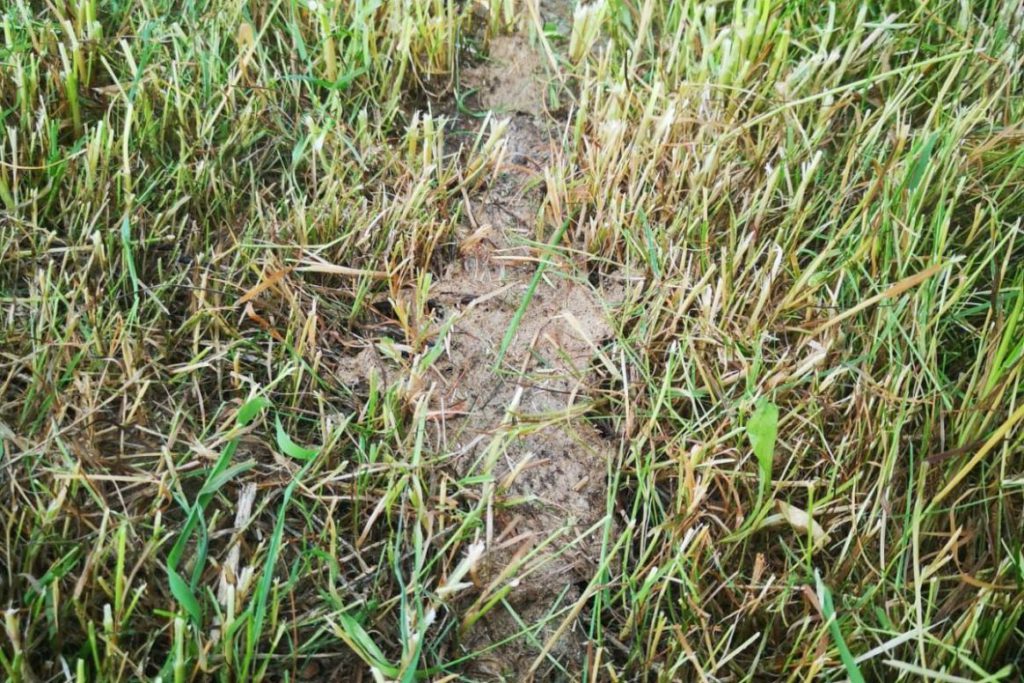 Spreading slurry and the environment

“Many derogation farmers have been forced down the road to purchase a trailing shoe or dribble bar. In my view, this is doing more harm to the environment than good.”

He explained the five ways the environment is affected. These include slurry emissions, diesel emissions, groundwater quality, soil life and soil compaction.

“The problem here is that experts are only looking at one of the above, and that is slurry emissions.”

While Dermot agrees that it is “very important”, it is only one of the elements that impacts the environment.

“So, if you look at a splash plate, a trailing shoe, and my spreader, only on emissions, the splash plate will fare out the worst, and the trailing shoe will be the best. We are in the middle of the two.”

“The trailing shoe helps sort out one problem but creates four more for the environment. The Moscha Swivel Slurry Spreader has lower emissions than a splash plate because it creates droplets of slurry.”

“A droplet of slurry is like a small balloon that is tied. It is filled with all slurry particles, including ammonia and nitrogen.”

“The result is that nothing can come out of the droplet until it bursts, and that does not happen until the droplet hits the ground. The proof of this is that the sky is clear above the line of droplets and in between the droplets.”

“There is very little smell, and scientists have proven that droplets reduce emissions.” 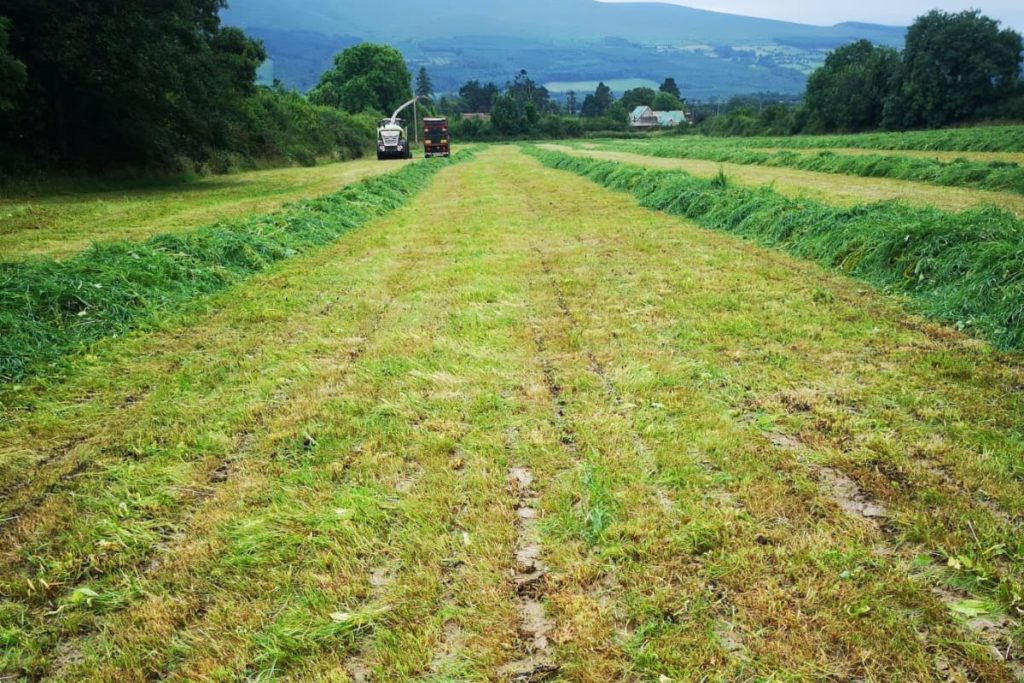 According to Dermot, when checking emissions, the length of time slurry is left sitting on top of the ground is not taken into account.

Dermot stated that lines of slurry after a LESS application for 6-8 weeks after spreading is evident.

“Every day that it is on top of the ground, it is producing slurry emissions. These are not taken into account when calculating the emissions for different slurry systems.”

The Kilkenny farm said advice is issued to the public reduce their diesel emissions in vehicles – including cars, trucks, and buses – but, in farming, the LESS is being promoted for slurry spreading.

He believes it is using twice as much diesel, for every 1,000 gallons of slurry spread, with agitation, bigger tractors, and a longer application duration.

“A farmer spreading his own slurry, with a 100HP tractor, that is in derogation, who is forced to spread with a LESS system, now needs a tractor that is at least 150HP.”

“The result is that they are producing more diesel emissions on every other tractor operation that they do on the farm, as well as slurry spreading.”

“The fact is that slurry emissions produced from spreading slurry are all gone within 12 years, whereas the diesel emissions are there forever. This is not taken into account and should be.”

Dermot stated that if you want to maximise nutrients removed from the slurry into the plant and not into the groundwater, you will need an even spread.

“This is crucial, with a maximum of 2,000 gallons per acre at any time. The Swivel Spreader is the only spreader that can produce an even spread and is calibrated and proven to do this.”

“Its spread pattern is a droplet, a clear patch, a droplet. Therefore, the root system of the whole field is capable of absorbing the nutrients from the slurry. The LESS systems, on the other hand, do the opposite.”

“They put out lines of slurry, ten inches apart and two inches wide. So, they put out five times the slurry concentration on the line (which is the equivalent of 10,000 gallons at 2,000 gallons per acre) with no slurry in between the lines.”

“With the Swivel Spreader, oxygen mixes with the slurry droplets, producing aerobic slurry, which gets into the plant fast.”

“With a heavy concentration in lines, as is produced with LESS, the oxygen cannot mix with the lines of slurry. This produces anaerobic slurry, which creates a bad bacteria which causes havoc with soil life, worms, or microbes.”

Dermot stated that using the LESS system, the farmer needs a bigger tractor and a heavier tanker, and it is evident that your ground compaction will be greater.

“The normal width of a trailing shoe for a farmer is seven to seven-and-a-half metres. However, the swivel spreader can spread up to 18 metres.”

“So, for every two tracks made by the farmer spreading with the Swivel Spreader, a farmer with a trailing shoe will make five tracks. Soil compaction is a big disadvantage to both the farmer and environment.”

“The LESS systems of spreading slurry have a positive reaction on one of the five points and a negative result for the environment on the other four; surely we need a balance.”

“With the LESS systems on silage ground, there is a big risk of slurry being brought back in with the silage. So, many farmers are concerned that this is going to have an impact on animal health.”

According to Dermot, farmers have to bear the brunt of the cost of new equipment, and the damage to the land with compaction and soil life is another disadvantage.

In February 2020, a report published by the NCA consortium of ten supply companies and the Association for the Preservation of Farmer and the Environment Researchers had the following findings.

“The current manure legislation is based on an illusion. The low-emissions application of emission-rich manure results in a very weak N-utilisation.”

“There may be a slight reduction in emissions to the atmosphere, but instead, there is leaching to the subsurface in the form of nitrates. The emission problem is therefore shifted to the subsurface.”

Dermot believes that the Department of Agriculture, Food and Marine should be advising farmers that slurry is a valuable fertiliser if applied correctly.

- Advertisement -
Previous article
Opinion: Dairy-beef will be a potential option for some, but it is not a panacea
Next article
Bullocks to €2,120 and culls to €1,940 at Headford Mart