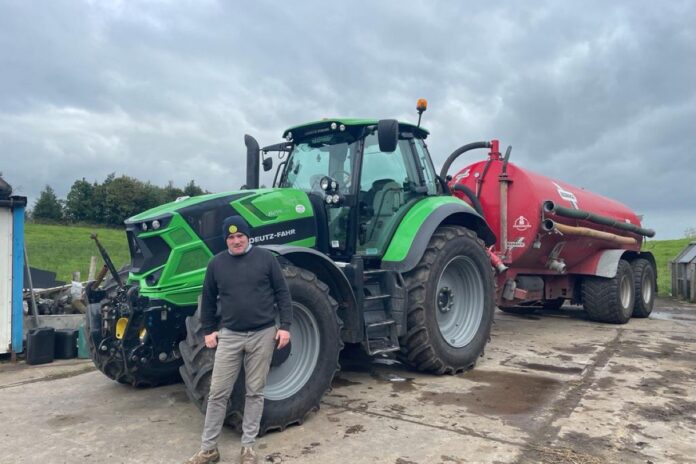 Not only does the Murphy family operate an agricultural contracting business, but it also has a store-to-beef system, finishing over 80 head of Friesian and continental-type cattle for Foyle Meats Donegal, ABP Clones and through live exports.

It was Martin’s involvement in helping a local agricultural contractor buckraking silage which planted the seed for him to offer baling silage and slurry spreading services during the late 1980s with a Ford 7000 tractor and two Welger RP-12 balers.

The company, based in Tydavnet, Monaghan, offers services including reseeding (90% grassland), lime spreading, dung and slurry spreading, mulching and hedge-cutting (with a circular saw through a digger attachment).

While in its environmental department it provides pressure washing for factories, a septic tank emptying service, snowploughing, roadwashing, drainage and fritting for businesses.

Murphy Agri Hire has a long-standing customer base, employing Martin’s sons, Michael and Shane and part-time workers, serving around fifteen miles away for agricultural work and up to forty-mile radius for environmental contracts.

“We are going all the time; we do not have a slack period. We work the whole year-round, unlike some other agricultural contractors who would be very seasonal, especially the ones round baling and at pit silage,” Michael Murphy told That’s Farming.

“What the customers want, they get as they need us, but we also need them.”

“So, we try to complete our work to the highest standard possible, but weather can have a say in it, and you might not get doing what you like to be doing.”

“I suppose you take the good with the bad, bite your tongue, and go ahead. But, in my view, you are only as good as your work at the end of the day, and it has to be done right.”

Michael explained that the business’s decision to provide a lime spreading service in recent years proved to be a “successful” move, with just shy of 6,000t going through the spreader annually.

Murphy Agri Hire operates a slurry spreading service with two umbilical systems in their fleet and feels they can complete higher work volumes completed by using this system.

Michael spends most of his time in the environmental arm of the business in the winter, which suits the “slowdown” of agricultural work.

However, he said it can be “very hectic” when the two branches of the business clash.

“My brother, Shane, would be very mechanically minded and works on a lot of machinery during the winter to keep everything in tip-top shape for the upcoming season.”

“Anything you go to do, whether it is concreting the yard or putting up a new machinery shed, has nearly become undoable with the way everything has gone.”

Michael pointed to the “massive” industry changes he has experienced since he joined his father in the business. He listed shorter working windows and tighter slurry spreading dates.

“Farming has become much to the minute. Everything has to be done now; it will not wait until tomorrow, whereas a few years you could tell a man/woman you are willing to put out their slurry in seven or eight days.”

“I think instead of shortening the slurry spreading window a week; they should be lengthening it a month. In my view, this slurry spreading ban does not make much sense; it is a hideous law” .

“It results in a lot of pressure for farmers who have to get their tanks emptied for a date.”

The business has no plans for expansion, but Micheal said, “I would not like to be in our job without the environmental end of the business as it leaves us in work all the tim”.

“I would like to thank all our customers and anyone on our day-to-day passing or who would give us a hand and to thank anyone that was in any way involved over the years in making life simpler.”

The agricultural contractor feels if prices continue to rise for a further eight years, people will look at the sector “because everything has become far too expensive”.

“I do not think agricultural contracting is going to be viable going forward without changes because machinery, diesel, and insurance prices are have up.”

“If you want a few men/women to work for you, their wages have gone up because household bills are increased, and they need more money.”

The agricultural contractor feels contractor rates have not increased enough to compensate with rising costs.

- Advertisement -
Previous article
Pairs to €2,540 and weanling heifers to €2,420 at Castlerea
Next article
Angus Autumn Extravaganza with a twist