Irish Moiled breed has a future in modern farming systems

The response to the Online International Irish Moiled Cattle Show 2022 from breeders has again been incredible and the standard fantastic, writes a society spokesperson.

There were over one hundred entries from all three constituencies in the haltered and non-haltered sections; breeders submitted three photos and a short video.

With twenty classes to work through and eleven championships, the judge, Dan Bull from Dumfriesshire, Scotland, had a very busy time scrutinizing all the photos and videos put forward, which he described as “difficult but a very pleasurable experience”.

The Irish Moiled, a cattle breed steeped in history, an Irish and UK native breed of cattle that is indigenous to the island of Ireland, has a very natural adaptability to thrive whatever the farming system is.

This means that the breed has a future that is promising and encouraging, and it is down to the hard work put in from the society and from the breeders in promoting and producing an animal that ticks all the boxes when it comes to farmers looking for an easier kept breed.

For anyone wanting to purchase an Irish Moiled, the autumn Magnificent Moilie Online Timed Auction is taking place through auctioneers, Harrison & Hetherington, from 7 pm on Tuesday, September 27th, concluding at 7 pm on September 29th, 2022.

It is necessary to register with H & H to be able to bid.

There are many vendors that have taken the necessary action to secure the necessary approvals regarding the new BVD trade requirements to be able to export to the ROI.

Burren Princess Pandora is by Castledale Maurice 2 EX94 and her dam is Curraghnakeely Pandora 7th EX94.

Her dam was a very successful show animal, having won many top accolades, which included overall haltered champion in the very first online show in 2020 when Burren Princess Pandora herself was the calf at foot, who also won haltered calf champion that year.

Now in the 2022 online show this young cow, a tremendous example of the Irish Moiled breed, Burren Princess Pandora took first place in the haltered cow class, senior haltered champion, and overall haltered champion before she took the overall title of overall supreme champion of champions.

Reserve overall supreme champion of champions went to Sam Smiley from Ballynahinch, Co. Down with Glassdrummond Cherry 45 (pictured below), recently classified in June, with an overall score of EX94.

The classifier was particularly impressed with her locomotion, giving her a score of EX97 for legs and feet.

Many animals from the Glassdrummond Cherry cow family have been very successful at many shows throughout many years.

However, there is the first time Glassdrummond Cherry 45 had been entered in any competition. She is a great consistent breeding cow for her owner, producing 10 calves in her twelve years and presently has a bull calf at foot. 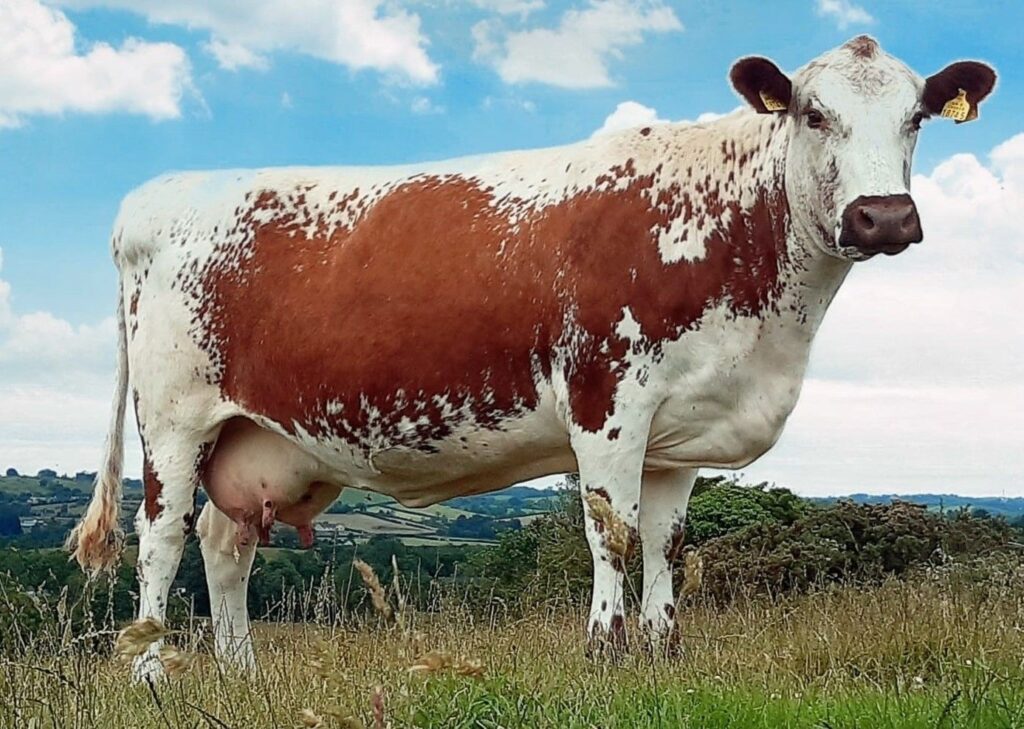 His dam is Glassdrummond Lily 18 VG88, and his sire is Tully Jack EX92, now the main stock bull of the Ravelglen herd of Brian O’Kane, Martinstown, Ballymena.

This powerful stock bull is the highest classified bull in the breed and has an array of winnings, the latest was in July when he was awarded the overall breed champion in the recent (NI) Irish Moiled Cattle Society National Show held at Randox Antrim Agricultural Show 2022. 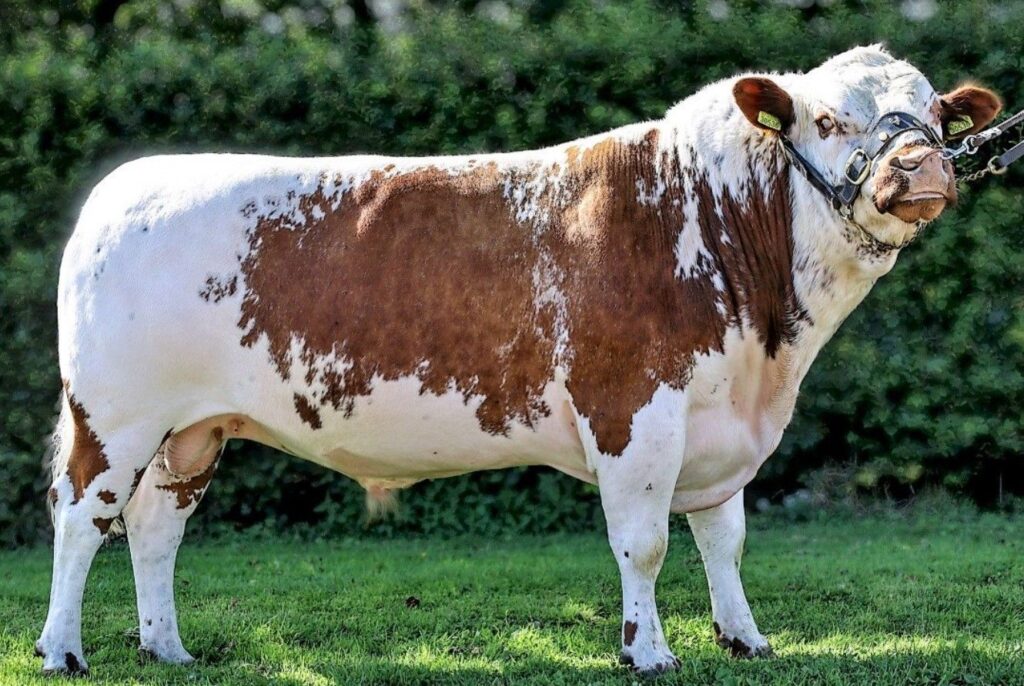 Intermediate champion in the haltered section was won by Joe Boyce from Co. Limerick with Beechmount Lizzie (pictured below), who he acquired in last year’s Magnificent Moilie Online Auction from the renowned Beechmount herd of Robert Boyle based in Millisle, Co. Down.

This heifer is just fresh from showing in the live classes at the recent Tullamore Show in August where she won overall breed champion. 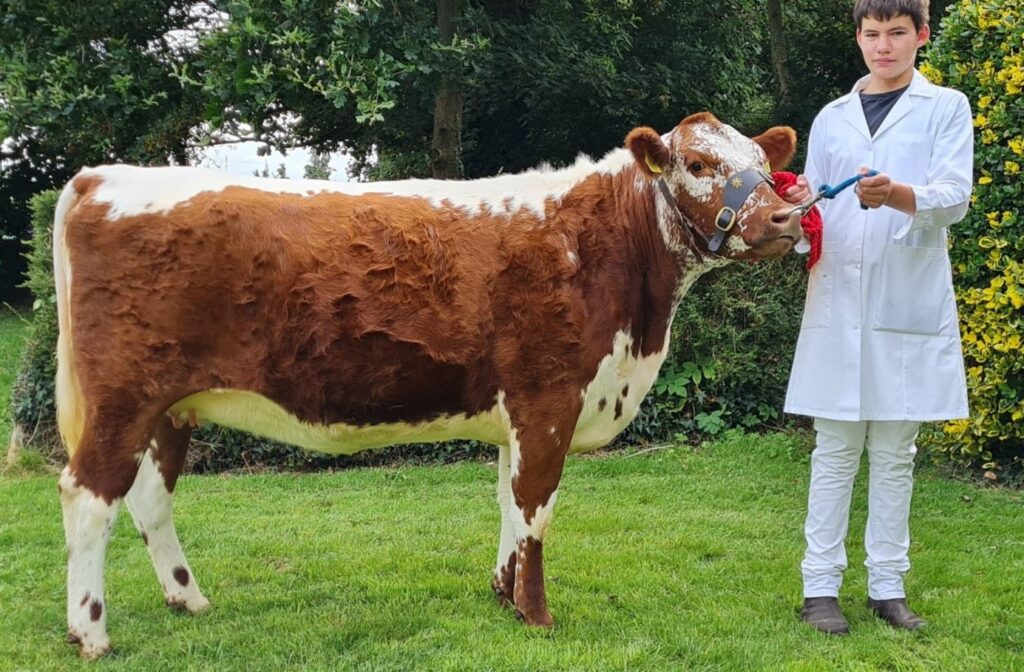 This heifer has also won red rosettes this year at local agricultural shows in Northern Ireland.

It was this heifer who ended up being crowned reserve overall haltered champion in this year’s online show. 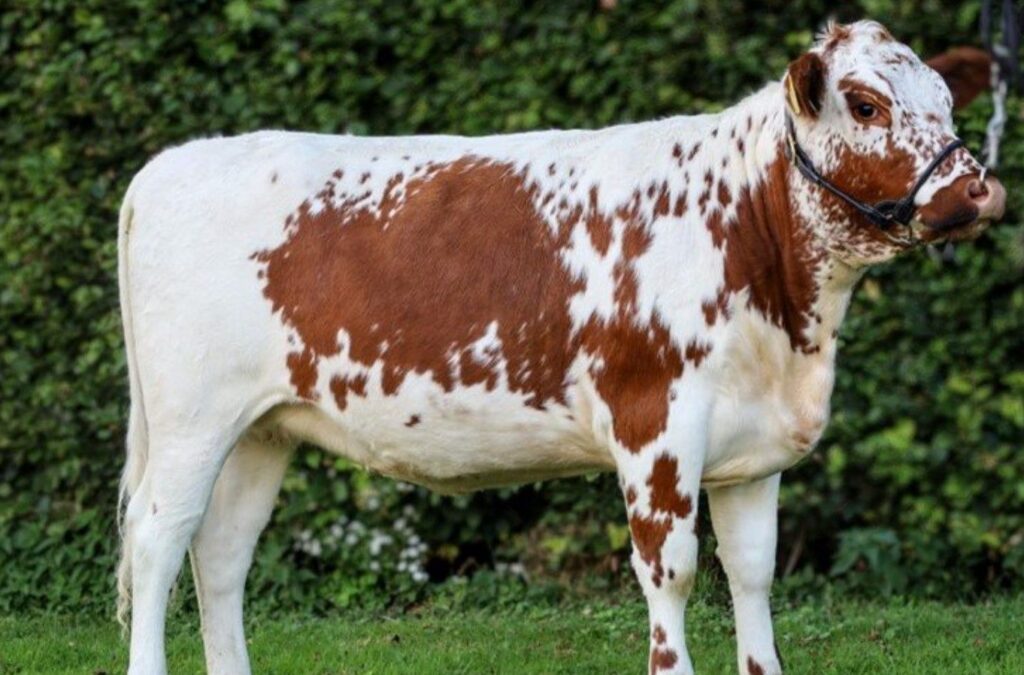 Sam Smiley of Ballynahinch, Co. Down, breds and owns the two females.

The intermediate non-haltered champion was won by a smart heifer – Beechmount Babs, which Robert Boyle, Millisle owns and bred.

She went on to win the overall reserve non- haltered champion. Another strong and fine example of the breed was Hollymount Charlotte, who took reserve junior champion owned by Robert Boyle. 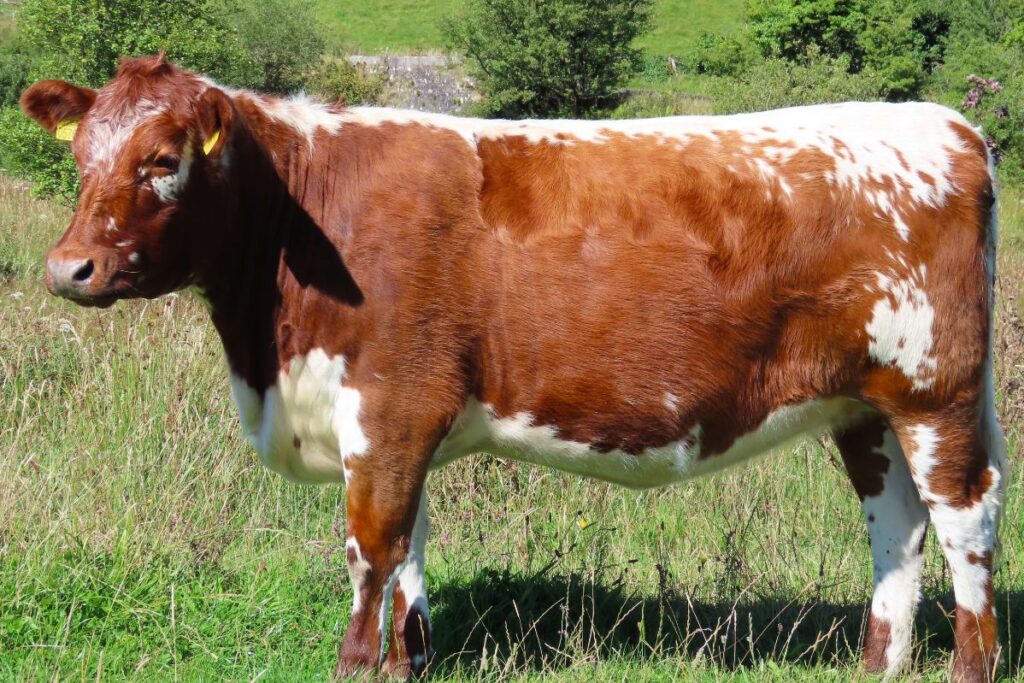 “Congratulations to all that entered the show, and thank you all for taking the effort to do so and making it a difficult but pleasurable experience in judging the tremendous array of animals forward.”

“Personally, whatever pictures I take, they look nothing like the animals I am looking at!

“The pictures, and especially the videos sent in, vary very widely in capturing the animal at its best. As always, I have judged what is in front of me on the day.”

“All the animals’ forward states that the Irish Moiled breed is in good hands and has a future in modern farming practices.”

“I was looking for well-balanced, structurally correct, length in areas such as plates and loins, depth of body, the width of pins and hips, good locomotive and great Moilie character and colour in my placings in all the classes.”

He continued: “They are two completely different types of animals, but both are wonderful examples of the breed.”

“Once again, congratulations to all, and thank you for allowing me to judge the show,” he concluded.