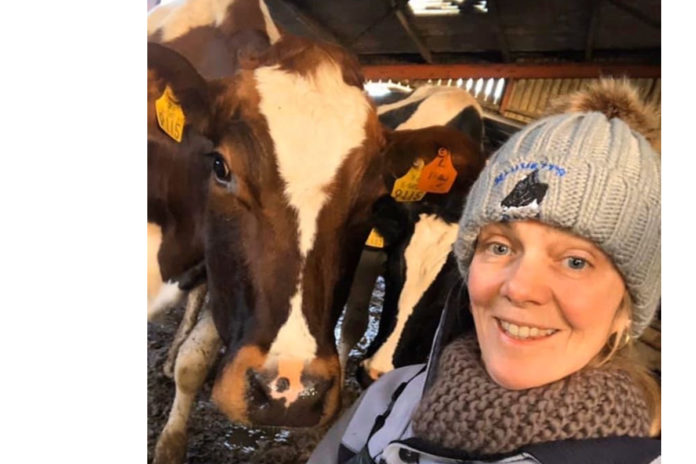 Milking over 290 Irish-bred cows in Devon

“If you are not afraid of hard work and you are dedicated, then it is possible to fulfil your goal.”

Elizabeth Hammett, who hails from Devon, projected those words when she sat down for an interview with Catherina Cunnane, editor of That’s Farming.

“Once I left school, I came home and ran the dairy enterprise, making all the decisions including what AI straws, cows and bulls should be bought. I never had a milking off in four years,” she explained.

After just four years in dairy, Elizabeth’s father sadly passed away at the age of forty-seven, following a battle with motor neuron disease. “He was ill for two years, so after much thought, my mum sold all the dairy cows and came out of dairy as my brother, who, is the fourth-generation, was too young to run it. He is running the farm now but is not dairying.”

“We farmed 1,000 sheep and 500 head of cattle for years, but Andrew got fed up working long hours and not having enough time to spend with his family.”

In 2015, the Hammetts decided to take a leap of faith and convert to dairy – just like Elizabeth’s late father, did. They travelled to Ireland to purchase heifers from David Clare Livestock in Westmeath and acquired nine stockbulls from the Kingston Angus herd in Taunton.

“The clock started ticking and the parlour went in, a 24/48 swing-over herringbone. Before we knew it, they started calving and Andrew and I broke in 230 heifers in total – 170 in the month of May alone.”

“James fed the calves – It was extremely challenging with 10-hours-a-day just milking – That’s without registering and feeding calves and the normal housework,” Elizabeth explained.

In 2018, their youngest child, returned to the farm to assist her parents. Now, Elizabeth, Andrew, James and Jasmine work as a team to oversee operations.

The family operate a block system, in which they calve in May/July; any cows that fall outside this window are sold in-calve. At the end of July, cows are AI’d to Belgian Blue sires over a four-week period and pedigree Aberdeen Angus bulls are introduced to the pastures for a further two-months thereafter.

They rear all calves until they are approximately 16-weeks-old. When they are fully weaned and consuming concentrates, they are then sold – either privately or at a livestock mart.

The herd has currently produced just over 7,100 litres at 4.2% fat and 3.6% protein, mainly off a forage-based system, with a concentrate input of 1.6 tonnes per cow. “Hopefully, we will be able to graze them from the end of March to end of November.

The family made their fifth trip to the Emerald Isle at the beginning of this month and purchased a further seventy-one in-calf heifers from David Clarke Livestock.

“We have increased our herd this year and will be calving down 296 Irish-bred Holstein Friesians. We like the cattle we buy from David – we can get the quantity we want and our ideal cow-type.” the Devon native explained.

The family is satisfied with their current herd size and will look to breed their own replacement heifers. “I absolutely love everything about dairy – the cows, the routine even the early mornings.”

“The most challenging part for me is breaking in heifers and the sheer volume of calves born in three months.”

“This is an extremely rewarding job and one I thoroughly enjoy – I get to work with my family and that’s a bonus,” Elizabeth concluded.