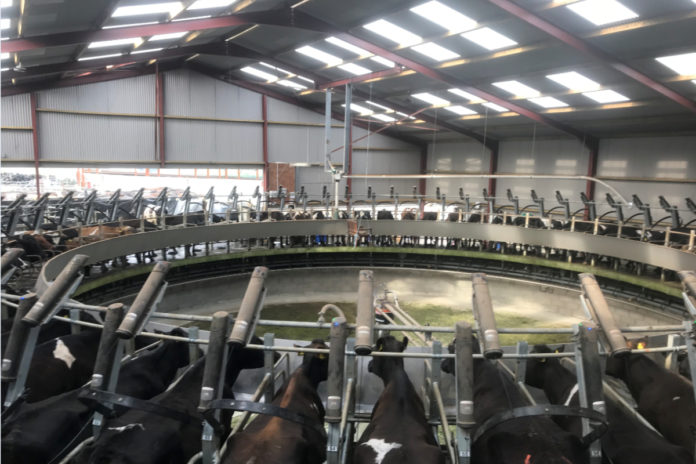 With long-term goals to the fore, Michael Bateman, along with wife, Shirley, have established a progressive large-scale dairy enterprise.

He began farming in his own right in 2005 and laid the foundations for the business that now employs five labour units.

Starting out one decade ago with 80 cows, they now run a 630-cow crossbred herd through a 64-unit GEA Milfos iFLOW rotary parlour in Crookstown, Co. Cork.

The focus on the 550-acre holding now is to breed high-EBI and high fertility crossbred cows. Breeding takes place over an 11-week period, using AI for the first month followed by teams of stockbulls.

Up to twelve bulls are utilised, with teams of four rotating daily, meaning bulls work for one day followed by a two-day rest period. This has resulted in an empty rate of 7-10% over the last number of years, while the culling rate has remained low to increase numbers.

An increase in herd size led to a need for a new parlour with labour demands and cow comfort being the main drivers.

Over the years, four local farms became available for rent which added 330-acres to the milking platform. The 28-unit herringbone system increased to 36-units, but was still insufficient.

Michael conducted market research to find the most suitable option for his system. “I opted for a rotary because of cow comfort, speed and ease on the operator.”

“The price of a rotary surprised me – I thought it would be a lot more expensive.”

“The 64-unit GEA rotary was well-priced, well-made and units drop under the platform, which we thought was a very simple and clean way of milking cows.”

The process of building the parlour began in July 2018 and the first cow set foot on the machine the following February.

“By day four, cows were flowing through the rotary well. Cows and staff are definitely more comfortable.”

“The big savings are the man-hours in the day. We could push it further and only have one-man cupping, but I’m not into pushing the staff that hard.”

“In a 36-unit herringbone, there were 17 rows of cows with 3 people milking for 3 hours. With the rotary, it now takes 2 people to milk for 2.5 hours.” Michael added.

Bateman had two herds of cows passing through the old parlour. “There would have been cows standing for up to three hours, so you couldn’t have milked them in the one mob,” he explained.

Last year, over 600 cows were milked in under 2 hours in the morning. “Currently, we’re slightly over 2 hours, but it’s the time of the year.”

“I am hoping to milk 350 cows per hour through the rotary again this year.” he said.

Grass production is key to success, as Michael measures his output on production per hectare rather than per cow. The farm grows between 15-16 tonnes DM/ha annually, which is supplemented by 500-600kg per cow; paddocks consist of between 10-17-acres.

“We are aiming for 1350kg of milk solids per hectare and we are doing about 1250-1300kg on the grazing platform – depending on the year.”

Managing grass can be challenging at times, especially the ground conditions experienced at the beginning of 2020.

“We had 26% of the farm grazed in February and 60% grazed by March 17th; the second round started on April 5th and the third round will follow on May 1st.”

When it comes to decision-making, Bateman has a network of family and friends for support and advice.

“My father, two brothers and sister are all dairy farming. My father started with 12 cows in the 1960s and between all his children, he has 1,200 cows now.”

“Our approach is to create a business and make it sustainable into the future and maybe not focusing too much in the short-term, but the long-term.”

“I really enjoy that kind of attitude to life where we don’t work too hard, but we certainly enjoy it.”

That long-term goal of sustainability is constantly at the forefront of his mind when planning. “My system is built on low cost with reasonable output. If we can’t make it sustainable long-term, nobody can.”

“Undoubtedly, we will see a milk price this year that will hurt us, but it won’t kill us.” he concluded.

To learn more about Michael’s parlour or any other GEA products, call Paul Kirwan on 0874432141.