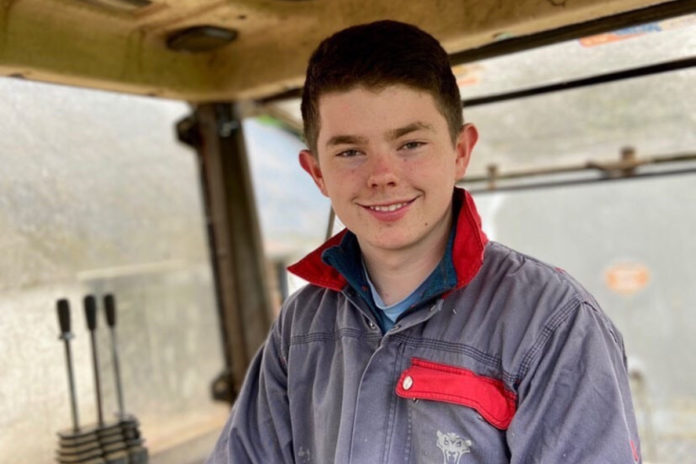 Milking 35 cows through a 3-unit parlour

The newest farmer to hit the YouTube scene is Barry Kenny from Creagh, Gorey, Co. Wexford.

Kenny farms alongside his family on their 35-cow dairy farm.

Speaking to That’s Farming, the 18-year-old explained the current system in place on their farm.

“We calve all year-round and are milking 30 cows at the minute. There are 5 dry and a few of them will calve before the end of this month. The most we will milk is 35. We were at 40 before, but that is the maximum we can farm with the amount of land we have.”

Milking through a 3-unit parlour on 45 acres, the cows are predominantly British Friesian as they continue to move away from Holstein cows with their 100% AI breeding programme.

“We’re trying to get rid of the Holsteins because the calves aren’t worth as much, so we’re going towards the British Friesians now,” he explained.

“For the heifers, we use Aberdeen Angus bulls because they are easy calving, and for the rest of them we would use top quality British Friesian.”

His father farms on a full-time basis and is helped by Barry and his sister Katie when they’re not busy studying. His father is currently laid off with a bad back, leaving Barry responsible for the farm – which is a role that he is relishing in.

“It’s a small farm so it’s manageable. All the cows are out now so there’s not as much tractor work. I’m more into cows than the tractors so I’m happy,” he said.

Kenny should be sitting the Leaving Cert at present, but the current pandemic has put a halt to that. It hasn’t put the brakes on his plans for the future, however.

“If I get the points, I would love to head up to UCD to study Ag Science. I have always been interested in farming, so the plan was always to get a degree in Ag Science. It will be something to fall back on too because you never know what way farming will go.”

“I will hopefully come home then and expand the farm. I want to get up to 60 or 70 cows, that’s the current plan anyway.”

You may or may not be aware of him from his YouTube channel and Instagram page, both named ‘Creagh Farm’, but it is something that Barry is passionate about and plans to continue delivering content to his followers.

Having been inspired by other ‘YouTubers’, such as Tom Pemberton, the then 16-year-old decided he would give it a try, not only for others to watch but to document his own personal progression as the years go by.

“I started in 2018. I was just milking cows and said I would film it. I didn’t know if anyone would watch it or not, but I had my phone and just stuck it up and started filming. I wanted to be able to look back in 10 or so years and see how much the farm has changed,” he explained.

As he entered 5th year in school, Barry decided to stop making videos and instead focus on his studies as the Leaving Cert drew nearer with each day. It wasn’t until the coronavirus hit and he had more time on his hands that he decided to start filming again.

“We’re at 2,000 subscribers on YouTube and 2,700 followers on Instagram. It was steady enough at the beginning but over the last month I have gained around 1,500 and hopefully that will stay going.”

His family also play a part in the videos, particularly his sister Katie who helped with the production of the content.

“My sister studies Art and Media so she doesn’t mind being on camera. She runs the YouTube and Instagram with me, so she helps me a lot. She actually thought me how to edit videos, so she has been a huge help.”

His father has yet to make an appearance on camera but is aware that filming on their farm is taking place.

Such a small farm can be seen as unique in a time where the national and international herd is expanding, and because of this Creagh Farm has drawn interest from an international following who are fascinated by their system.

“A lot of the American followers comment on the size of the farm because they’re so used to their big farms, but they like to see these little farms too.

“A lot of people can’t understand why we’re milking in a 3-unit parlour and on a small farm, but it’s working for us, so we’ll keep ticking along.”

With a bright future ahead of him and many plans in mind for his farm, the Wexford native doesn’t plan on increasing his farm too much when the time comes for him to take the reigns.

“I wouldn’t like to milk 100 cows because when you get to that stage it becomes too much of a business, whereas I see farming as a lifestyle. If I can get to 70 cows, and keep up the social media as well, I’ll be happy.”

That lifestyle and the love for the land is ingrained in this young man and is the driving force that keeps him farming every day.

“You have to have a love for farming because, no matter how many cows you have, you’ll never stick it if you don’t love it.”