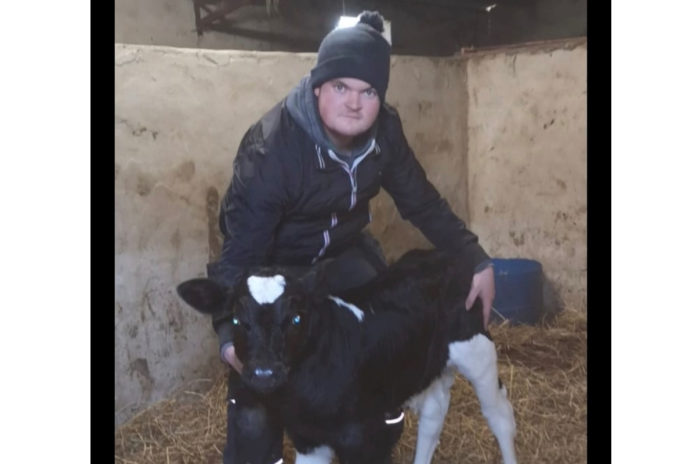 Milking 30 cows through a 4-unit parlour

As he works full-time for Woodford Timber Products, his father holds down the fort during the day and he assists in the evenings and at weekends.

The cows are predominantly British Frisian, alongside two Simmentals and a Jersey. The 20-year-old said they prefer these breeds because of their ease of handling and management.

Calving takes place all-year-round on this farm, with the numbers going through the parlour varying between 10 in the winter and 30 at peak, with most calving down between February and April.

Brian explained the reasons for choosing this calving pattern, saying: “taking a break in the winter never crossed our minds, you have a steadier income every month this way”.

“We wouldn’t have the facilities to have compact calving either. We’re pushing things as it is because we had a lot of cows calve over the last 2 weeks.”

All breeding on the farm is AI, with a big focus on easy calving and high-EBI Friesians for replacements. Brian told That’s Farming that each straw is chosen to suit each particular cow or heifer.

“We pick mainly Angus bulls for the heifers and then the older cows will get a Simmental or Belgian Blue straw, with the odd Charolais too.”

“Everything in between will be bred to Friesian, Angus or Whitehead,” he explained.

Over the last few years, Angus and Hereford calves have performed the best, according to this young farmer. All bull calves are sold at a few-weeks-old, while heifer calves are fattened for two years and sold at Carrigallen Mart.

The grazing platform on this farm consists of 3-4-acre paddocks, that are strip grazed all-year-round to boost grass utilisation.

Cows turned out about three weeks ago and are said to be performing well. The Kiernans are hoping that some well-needed rain will drive it on further as the silage season approaches.

“We put fertiliser out 3-weeks-ago and will hopefully cut silage in the first week of June, all going well. There are two pits to fill and any surplus grass will be made into bales then.”

The COVID-19 pandemic has made it a difficult spring for selling calves, resulting in the Kiernan’s holding onto some of their bull calves due to poor prices. As a result of this, the new plan is to castrate them and sell them at a later date.

“We have another farm over in Mohill where we keep about 20 Charolais and Limousin bullocks, so we’ll let them off over there for the next year and a half or 2 years. They’ll go through the mart then at 550kg or so.”

The pandemic has also had an impact on the Leitrim man’s social life, as his local Macra club has not been able to meet up since the crisis began. As a founding member of the Carrigallen club, Brian said it is a great social outlet for the local farming community.

“I get great enjoyment out of it, going to meetings and events. I was the King for King’s and Queen’s back in 2018. I’ve enjoyed it over the last few years, it has been good fun. It’s something you would miss now.”

In terms of cow numbers, Brian said they are happy where they are now and any expansion in the short-term will be no more than a handful of cows.

“We just don’t have the facilities to keep much more. To milk 30 cows takes about 45 or 50 minutes in our 4-unit parlour. We could build more but we don’t have the land to expand either.”

However, as the young farmer returns to farm on a full-time basis in the long-term, he could see himself raising the numbers should land in the locality become available. For the time being, their current situation suits both of them.

Going back farming is a definite plan when that time comes. Whilst he enjoys the work that he does now, it could never replace that love for the land.

“I enjoy farming – I know it’s hard work and it’s hard to make money out of it. There is just a love there for it and it’s in my blood I suppose.”