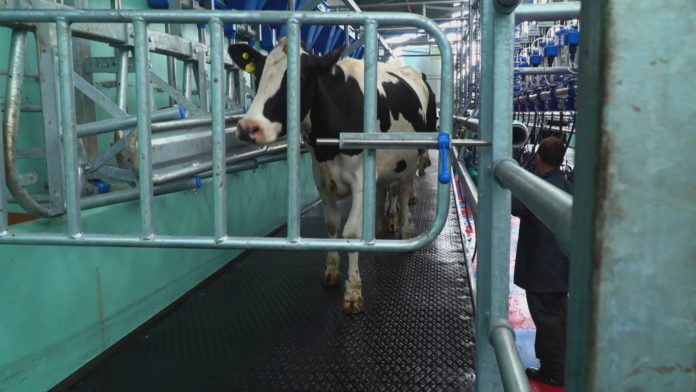 It’s August in the next episode of UTV’s Rare Breed – A Farming Year and producers travel the length and breadth of Northern Ireland to gain an insight into what’s keeping farmers busy at this time of year.

Orlagh McGovern is celebrating a great set of ‘A’-Level results as well as her 19th birthday!

The family then head out to the Jason McGovern Memorial Tractor Run; this is the fifth year of the event which all the family supports as well as the local community. Over 200 tractors turn up for this year’s event.

Three of the girls are driving tractors on the day – pointing out it’s not much different to driving a car, you just need to be more aware of the surroundings.

In Cloughmills, Co. Antrim, Wallace Gregg’s new milking parlour is proving a big hit with him and his herd alike. The parlour was over ten years in the planning with anxious times waiting for planning permission as well as a sizeable investment.

He can now milk 24 cows in ten minutes when it took half-an-hour in the old parlour.

Farm vet, Diane Beattie, is doing a surgical shift at Ballyclare Animal Hospital, and taking a break from farm work. She gets gowned up to neuter a boxer dog and while she operates she talks about how neutering dogs can help calm them down, and also prevent certain cancers.

Reassessing the future of a beef herd

In Lisnaskea in Fermanagh, Stephen Maguire is battling bad weather and reassessing the future of his beef herd. He’s separating six-month-old male and female calves, and discusses the pros and cons of diversifying into dairy, poultry or pork.

He weighs and vaccinates the calves to cut the risk of pneumonia, until the heavy rain stops the work for a while.

Finally, it’s back to outside Newtownards to Valentine and Chris Hodges. The bees have to come out of the frames before they extract the very first honey of the year.

The Hodges have invested in a new spinning machine to make the process easier but results in Chris throwing himself across it to keep it on the ground!

The bees too have suffered as a result of the heavy August rain and has hampered honey production.

UTV’s Mark McFadden, narrates the series, which is sponsored by Moy Park and continues on Thursday, February 27th at 8.30pm on UTV.

- Advertisement -
Previous articleRevealed: Maximum collection amounts for fallen animals
Next articleQuiz: How much did these culls and bulls sell for?