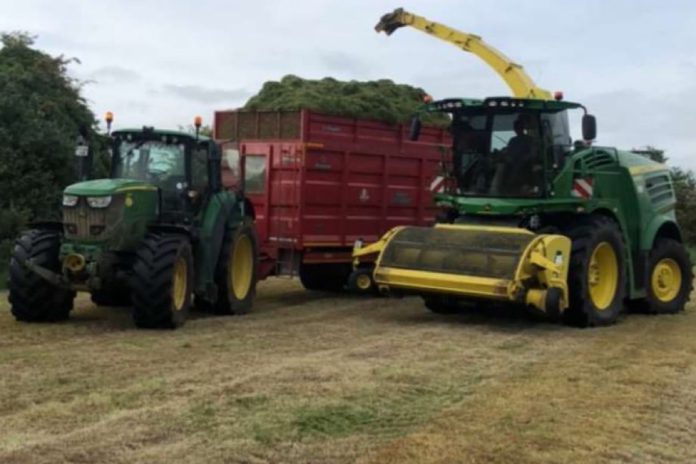 The FCI (the Association of Farm & Forestry Contractors in Ireland), has called for the ring-fencing of 200 million litres of MGO for the harvesting sector between the end of April 2022 and the end of September 2022.

It has warned that if green diesel supplies are not ring-fenced, “there will not be enough fuel to harvest the national silage crop”.

Its research shows that there are approximately 700 self-propelled silage harvester fleets in farm contractor firms in Ireland.

According to the FCI, these fleets consume in the region of 3,000 litres per day harvesting, an average of 100-acres of grass silage.

Including the bale silage sector, which includes a larger number (close to 2,000 separate fleets) of individually smaller tractor and machinery fleets, that bale more than 20 million bales annually, there is a slightly lower MGO demand.

Research from FCI members and industry sources shows that mowing, tedding, and baling a bale of silage will use between 3.5-4.5L/bale.

“The higher rates are in the smaller farm areas. The farm contractor has more travelling to do between farms and uses more fuel as a consequence relative to the reduced daily output.”

“This means that somewhere between 50 and 70 million litres of MGO will be required to be available to complete the baled silage harvest in Ireland in 2022.”

Besides, the Irish forestry contractor sector has a fuel requirement of between 18 and 20 million litres per year.

The association based this figure on a pool of 120 harvesters and 150 forwarders, each consuming 300 and 250 litres daily, respectively, over a 40-week working year.

According to John Hughes, FCI national chair, these figures give a total combined and immediate short-term requirement of 200 million litres of MGO to be ring-fenced for the harvesting sector over five months.