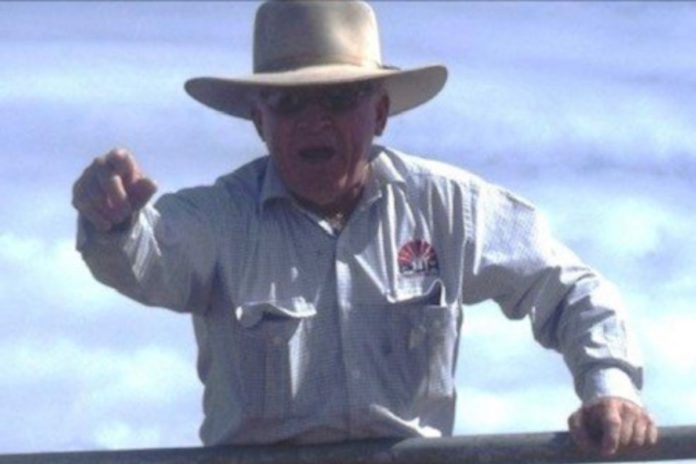 Meet the livestock auctioneer who has sold over 1.6 million cattle in his lifetime

Retired livestock auctioneer, Peter Holland (72), claims that he has sold over 1.6 million cattle in his lifetime.

He decided to hang up his boots four years ago, after officiating as a livestock auctioneer at some of the largest cattle auctions in the world.

Although Holland was not raised on a farm himself, his maternal forebears once farmed on the Emerald Isle.

“They farmed in Ireland before they ventured to Australia during the persecution. I can trace my maternal, paternal heritage to Ennistymon in Co. Clare.”  he told That’s Farming.

“One of my maternal uncles used to take me to the sales yards when I was a young man. At the age of ten, I felt I wanted to be a livestock auctioneer. That is all I wanted to be.”

Eight years later, he embarked on a career in livestock auctioneering. He sold calves, pigs, horses, and sheep in the early stages, before switching his primary focus to the sale of cattle.

“Back then, we did not have any courses; we just learnt at the school of hard knocks. It was pretty good fun.”

“Livestock auctioneering is a performance; it is an art within itself. You must perform and capture the audience.”

“Every lot is something new; it is not boring. When I was auctioneering, I liked to have my vendor at the fore of my mind when selling.”

Peter sold at all major sales centres in Queensland throughout his 45 plus years career, including Dalby, Rockhampton, Emerald and Roma.

“At the sales yard, they have 7,000-8,000/head per week, depending on feed supply. Australia experiences some horrific droughts where you may not get rain for five to seven years and this controls feed supply.” 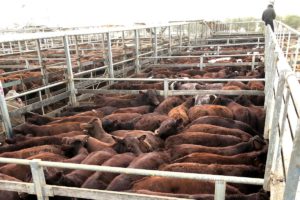 “Livestock auctions in most of the Australian states host wet-curfew post-weigh sales. Cattle are drafted by hand in the yard with drafted gates and lanes.”

“Auctioneers walk on a top rail and buyers are positioned in a laneway in front of cattle.”

“Auctioneers sell cattle pen-by-pen, and once cattle are sold, they move from the wet yard. Horseback riders take cattle to the scales for weighing. In some cases, one lot can consist of 25-30 head from a sole vendor.”

Holland played a pivotal role in changing the way in which cattle exchange hands at auctions in Australia.

“Some Roma agents were against trying to change the format of weigh first, then sell the cattle. I decided to do it on my own. We were so happy with the result, we wished to repeat the event.”

“The following year, our company introduced this as a part of the Roma Agricultural Show. After this success, the combined agents were all in favour to change their selling and weighing at their two weekly sales.”

Roma Salesyards, he explained, has eight agents operating and the yard is known as a combined agent selling centre.

“Agents sell in order, top to bottom, firstly steers. When each agent has sold their steers, they then go back to agent one, who starts the heifer market.”

“Every agent sells their heifers, and the sale pattern continues. The draw for selling position is completed in January of each year. The draw is done once, but they have a staggered system.”

“Briefly, from the first draw, agent one will sell number three at second, week two will go to four, three will go to five, then four to six and so on.”

He said that up to 10,000 head could be offered for sale in one day at the likes of Roma Saleyards. In cases, like these, a sole vendor could present between 300-1,000 cattle for sale.

“Believe it or not, we can finish those sales in six hours. In that time frame, auctioneers can have their job completed, but the cattle are not necessarily weighed.”

“Before cattle came to auction, I used to undertake on-farm visits. This gave me a better understanding of the cattle and allowed us to advise the vendor, how many to offer for sale, to break lots up, etc.” 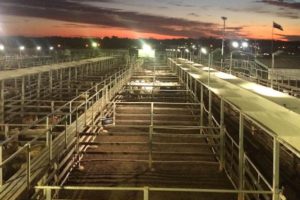 A parting word of advice

And with invaluable life experience under his belt, what advice does he have for aspiring auctioneers?

“When you’re an auctioneer, remember that the buyers are not your mates, but at all times, show them respect.”

Peter cites the successful recipe to the agency business as “always being available to your client”, adding “we are a servicing industry and need to be available”.

“Also, we are at a time, where I believe we have too much information to decipher correctly and we need to be available to do it.”

“Once an agent loses sight of his vendor’s importance, he can retire or leave the industry, in my opinion.”

Although you will no longer find Holland in the hot seat, farmers will remember him for his humorous one-liners that sealed over a million deals.

“Never go home and talk about the ones you should have bought. These won’t be here next week, so today or never.”