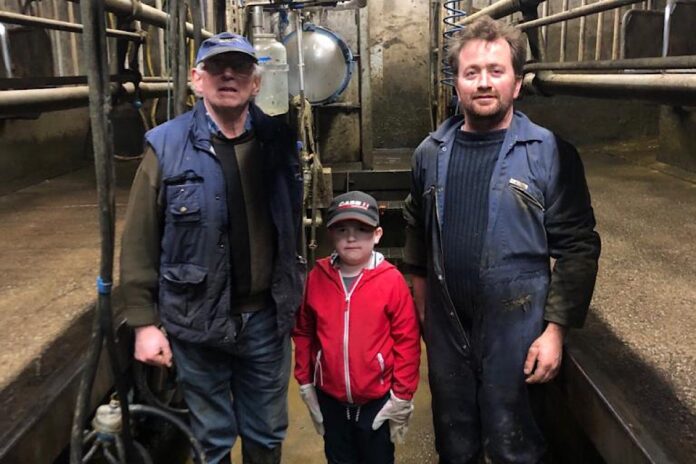 In this week’s dairy series, That’s Farming, speaks to David Moore. He discusses farming with his father and brother, using fixed-time AI, saving money using foliar nitrogen, plans to use solar energy, and their aim of 700kgs of milk solids.

Economic sustainability and environmentally friendly practices are at the forefront of the Moore family’s thriving dairy enterprise in the midlands.

The family from Stamullen, County Meath, intend to install solar panels to reduce emissions and become carbon neutral, use roof space in the yard on their dairy farm and cut their reliance on the national grid.

They see dairy farming in the future as “totally” changed with many other revenue streams that the farm can make.

They are eyeing up the possibility of embracing Solar PV technology to create energy on-farm instead of paying up to €25,000 on electricity every each.

David Moore, his brother, John, and father, Robbie, from Stamullen, County Meath farm 160 pedigree Holstein Friesian cows and 50 Angus-cross heifers on 350-acres, which they rent most.

In the late 1980s, they graded up their commercial cows to pedigree cows and established the Fowlerstown herd, whose main families are Crocus and Cora.

In 2001, David attended WIT, where he did a Bachelor of Business (Hons), and after graduating from college, he worked for two different hardware companies until 2009.

David has no farming qualifications but said one of the best things he did was join a discussion group of young farmers upon returning from working in sales.

He came home during the recession with his “tail between his legs” and counts himself and was lucky there was a position on the farm available for him to step into.

“I always had a passion for farming right from a young age. We were always on the farm in our spare time, we love farming,” David Moore explained to That’s Farming.

“I would not consider what I am doing now as a job. I do not mind going to work every day.”

“Moreover, I love the way that my father (76) motto is you cannot be doing it the same way you were doing it five years ago.”

David’s father is passionate about bovine genetics and assisted with Progressive Genetics’ establishment.

“I suppose even though there were no milk payments for protein or fat years ago, he was always buying bulls on the continent with high fat and protein percentages because he saw the future was coming, and it did come years later.”

They decided to expand to 160 cows to earn an income for three families from the farm.

“The 6-week calving rate bears no reflection on profitability for the farm because we are milking all-year-round, and we get full lactations out of the cows anyway.”

“A cow that calves in May for us will still do 315 days in milk and will calf next April. So, some of our late-calver cows are our most productive.”

According to the Meath-based family, they achieve these production figures through feeding 1.6t of meal per cow and maize, brewers grain and high-quality silage.

Milking cows get a 70-80 DMD silage with silage quality paramount to profitability on the farm.”

They claim they are in the top 5% in Ireland regarding EBI with a herd figure of €176.

“In my view, the Holstein Friesian cows are most profitable for our fragmented farm.”

“We are getting huge milk volumes with huge kgs of milk solids, huge protein and the most efficient return for high inputs.”

“Our focus going forward is to produce the highest amount of milk at the lowest emissions.”

“We feel that we have a far better chance of doing that with the high EBI pedigree Holstein Friesian cow. So, you need more efficient animals going forward.” 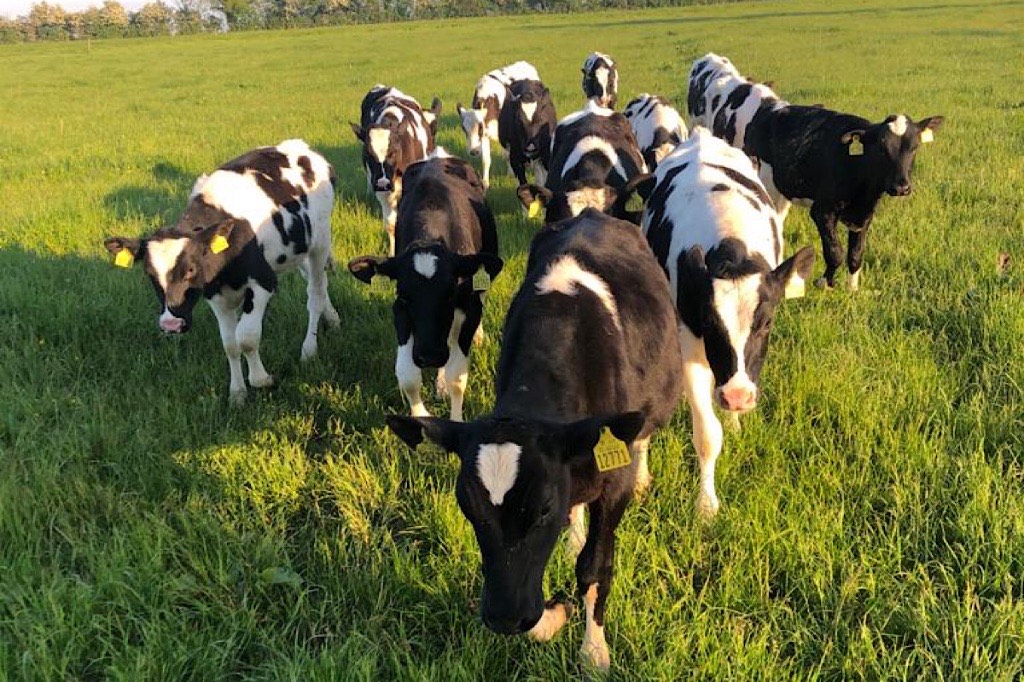 The Meath dairy farmers use 60% sexed semen on their heifers, and they serve the remainder of the cows with a beef straw.

“Heifers are all on a fixed time AI programme and get served to sexed semen and are moped up by a bull to minimise heat detection.”

They use two rounds of sexed semen on their heifers with repeats the third time getting conventional semen.

They get 55-60% conception rates for heifers on their first service.

Furthermore, they select their AI sires based on the “highest” milk index with proven genetics and a “proven” history” of milk recording.

In addition, they use three home-bred stock bulls with an average EBI of €300 to mop up and put one per group of heifers.

Commenting on why they introduced sexed semen to their breeding programme, they said:

“If there are 150 cows in the herd, you want to breed the best. So, our best cows will get sexed semen.”

“We only want a replacement heifer from them, so there is no point breeding a heifer out of a poor cow. We want to make our herd better.”

“In my view, the genetic pool is getting better every year if you go abroad.”

“However, our big concern is that all the Irish bulls are inbred and coming out of one of two sires. So, we stopped using Irish bulls.”

They calf their herd in autumn and spring as they supply milk all-year-round. They opt to calf their heifers at two-years-old.

“In my eyes, two-years-old is the most sufficient age. After that, they only need to be wintered once before they calf from a cost point of view.

“We weigh calves and always feed meal at grass.”

According to the Meath dairy farmers, the herd’s calving interval is 378 days with empty cows, which includes 12% of the herd carried over, which would have a 450 day+ calving interval.

“If we decided to cull these cows, our calving interval would be below 360 days.”

“However, it is far more profitable to keep these cows and then sell them as empties.”

They aim to have all cows served before they reach 60-days after calving. “My brother is fantastic when it comes to overseeing heat detection. He puts the effort in and paints the cow.”

“If a cow calves in April, I will not serve her then until she calves in the following August or September.”

They aim to retain 15-20% of replacements annually and cull cows “poor” on production figures.

In addition, they sell up to 65 first and second-lactation freshly-calved cows at Carnaross Mart and through Carnaross’s dairy sale conducted by Taaffe Auctions.

They also sell up to 12 bulls per year off-farm and sell bull calves within 14-days-old. 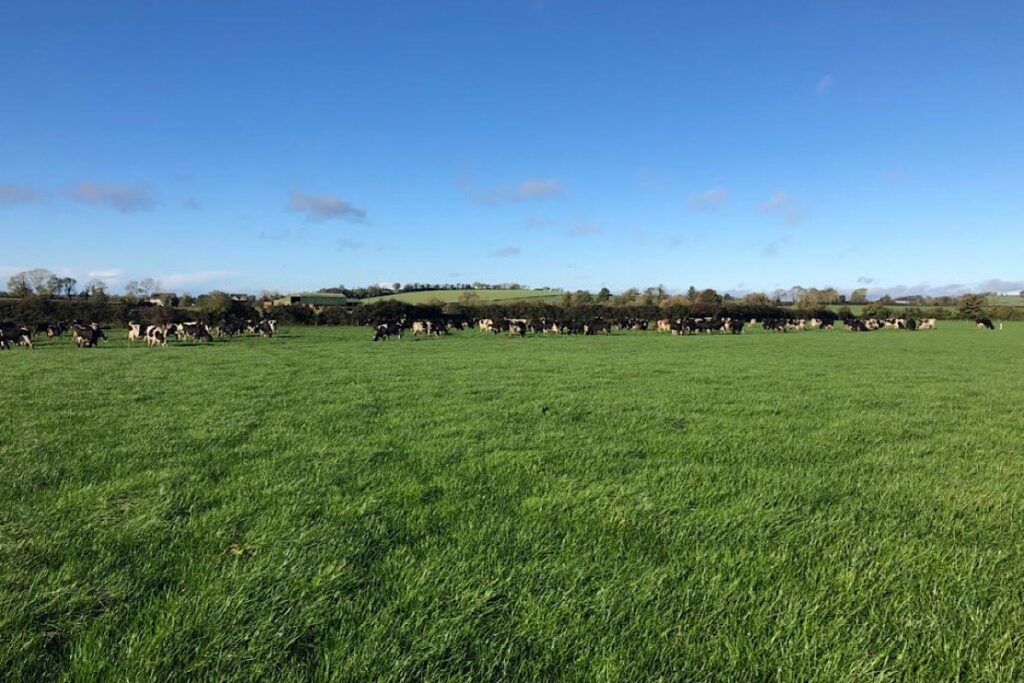 The family puts focus on silage quality and cuts their first-cut silage each year in early May.

Then, they cut every five weeks from that date on a multi-cut system and maximise production from forage.

Having a consistent diet daily for cows is a key part of the grassland management programme on their farm.

They grass measure by the eye as they are now very comfortable doing this and know where they are going to be in 10 days.

“We have been skipping paddocks and taking out surpluses or introducing buffer feed to avoid shortages.”

The farm is in a derogation and is highly stocked. “Our problem is we can grow so much grass so the farm can carry such a high stocking rate.”

They stated the reason for applying for the derogation was over 170kg, with current nitrogen levels at 2.35 for the whole farm.

They find the cons with being in a derogation, following rules, that the derogation remains, with the pros being able to apply slurry using a trailing shoe, which they said has “transformed” the farm.

They have decided to spray foliar nitrogen over spreading fertiliser this year.

They are getting “four times the kick” by melting the urea down from the same product and use less than half of what they would use originally.

“For example, for my second-cut silage, we normally put on 70-75 units of nitrogen per acre, this year, we only put on 35 units.”

They believe by applying this, they get a two-pronged benefit one better for the environment as less nitrogen use and two better from a cost-saving point of view.

“By applying foliar nitrogen, you will use less fertiliser, so you will save money.” 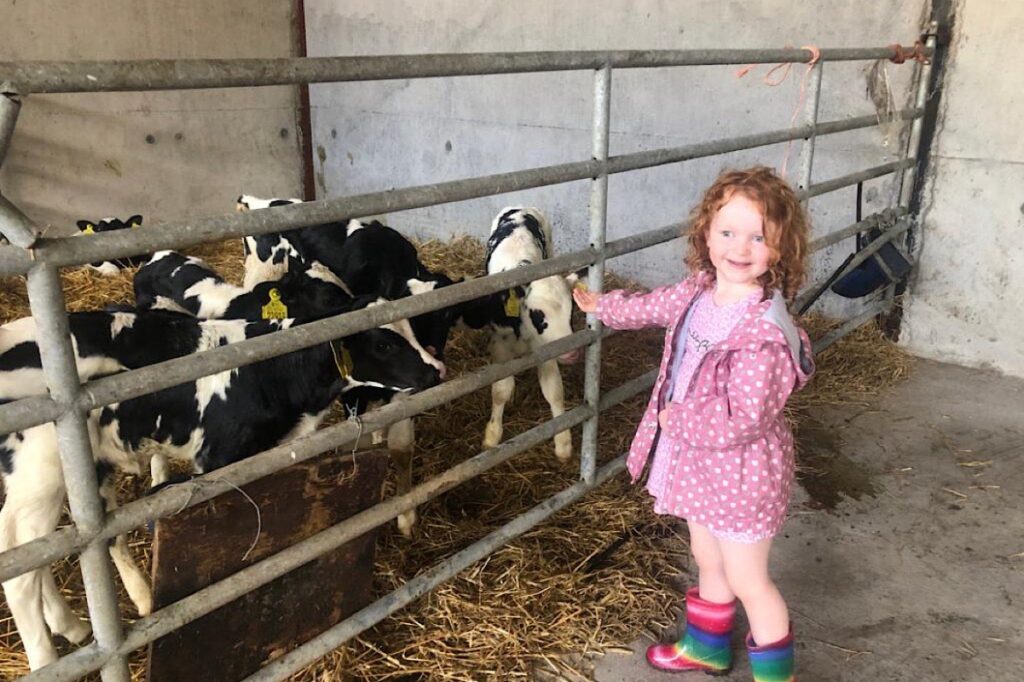 They milk cows in a 10-unit Dairymaster milking parlour with a feed-to-yield system and automatic cluster removers, which they installed in 2011.

They plan to upgrade to a rotary or a 24-unit rapid exit milking parlour in the future to reduce milking time and make things easier.

Other farm infrastructure includes cubicles for 400 cows and calf penning with plans for investment in computerised calf feeders.

Other technologies the farm implements include GPS and autosteer on a new Case Maxxum 145 Row Crop tractor with section control on the fertiliser spreader for accuracy and efficiency.

The challenges that face the family include rising input costs, labour shortages, and dealing with paperwork, with the biggest threat being the ability to change.

From an environmental point of view, they aim to produce high-quality milk solids with low greenhouse gas emissions.

They aim to maintain current cow numbers and produce 700kgs of milk solids per cow annually.

They noted digital media is “unbelievable”, and farmers can exchange ideas with them and vice versa.

“In my view, sharing knowledge and your willingness to adapt to change are the most important things for Irish agriculture.”

“The future of dairy farming is very good. But, it is like everything else we are going through good years and bad years will come, and we have to be able to weather the storm.”

“We have to adapt to change to be able to weather the storm.”

“One of the big problems going forward are input costs. By applying foliar nitrogen, you will use less fertiliser, so you will save money.”

“In my opinion, our ability to adapt to change when needed is what is going to determine the profitability of dairy farmers going forward,” the dairy farmer concluded.

- Advertisement -
Previous article
‘The real issue at the present time is a matter of money’
Next article
Beef trade: Cattle prices up a notch in the north