That's FarmingThat\'s Farming Irelands Largest Farming News, Properties and Classifieds Network
HomeBeef‘If I had to rent land at €250/acre I couldn’t do it’...

During his time working in New Zealand and travelling across Australia and America, Stuart McKeague learned that “you judge livestock by what they can do for you and not what they look like”.

This has proven to be a game-changing lesson for the Donegal who has built a progressive and productive 88-cow suckler herd.

Efficiency, productivity, and functionality at to the fore at McKeague Angus, in Claggan, Culdaff, which was once home to a continental herd.

“Efficiency is a massively underrated aspect of beef farming in this country. When we compare the genetic gains made in dairy, pigs and poultry over the past 20 years with that made in beef, it is not good enough,” he said in an interview with That’s Farming.

Stuart works part-time for Taylor’s of Fyfin, selling meal, fertiliser and seed and farms the suckler herd, with a 150-ewe flock, alongside his wife, Tracy, and their three children: Isabella (8), Tom (7) and Sam (3). Their farm encompasses 350-acres while they rent a further 90-acres.

“My father, Billy, does a lot of the unexciting jobs like draining and the required maintenance, freeing me up to concentrate on the livestock.”

“The herd peaked at almost 400 cattle a few years ago, but we have a more manageable 350 now.”

In his opinion, it is “too easy to judge cattle visually alone without fully understanding the cost of production”.

“What an animal grades and kills out are only half the story. The time and cost of finishing them are just as relevant.” 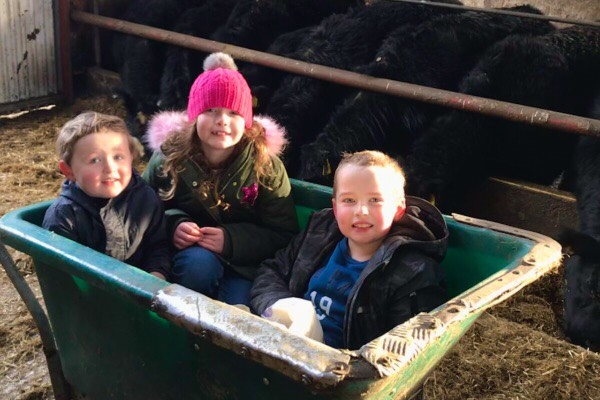 Since switching to all Angus cattle, Stuart’s average finishing time has decreased by five months, and he claims his meal costs are down over 50%.

“While my cattle do not grade as good as continentals, they make more money.”

He sourced his foundation females from Cavan, and these carried lines including Netherton Eastern Cruz and Proud Boy of Dunleve.”

Over the years, he has added females from the Old Glenort, Moncur and most recently, the Loughan’s herd of Rory Best.

“Cows needs to be fertile, milky, be of moderate size and carry good shape and flesh, be good on her legs and have a good temperament.”

“Some breeders would focus on heads, hair and breed character, and while I would not dismiss this, I do feel if you do not concentrate on commercial traits and lean towards the show ring, you will inevitably leave some of these behind.”

“I would be pretty brutal when it comes to culling. Milk, fertility, temperament and calf quality being the main ones. Ideally, I am for one calf per cow per year, but unless you hit a good strike of twins, this isn’t always possible.”

Commenting on support for suckler farmers, he said: “I think the BEEP-S and BDGP schemes are a no-brainer. Of course, there is a bit of work involved, but the financial rewards far outweigh this for me.” 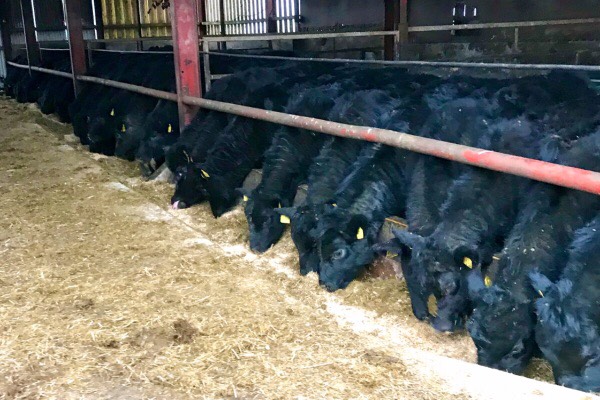 Stuart incorporates a limited amount of AI into his breeding programme, as he likes the “consistency and tighter calving that a stock bull gives”.

They imported Duncanziemere Sportsman, “a very long muscular bull with a great temperament”, from Scotland in recent years. In recent times, they acquired Steil Pedro, “a softer fleshing type of bull” from Cathal McCormac in Roscommon.

Most of their bulls venture to dairy herds; however, one of their most notable sales came in the form of McKeague Noddy for the Gene Ireland Programme.

The McKeauge’s aim is to breed bulls that will produce a superior quality calf off a dairy dam. Moving forward, Stuart thinks that there will be a greater emphasis on carcass weight and quality.

“The breed average for carcass weight is 6kgs. Most of our stock bulls are three times this.”

Currently, he undertakes a limited amount of ET work but hopes to do more in the future as the herd identifies cows worth flushing. 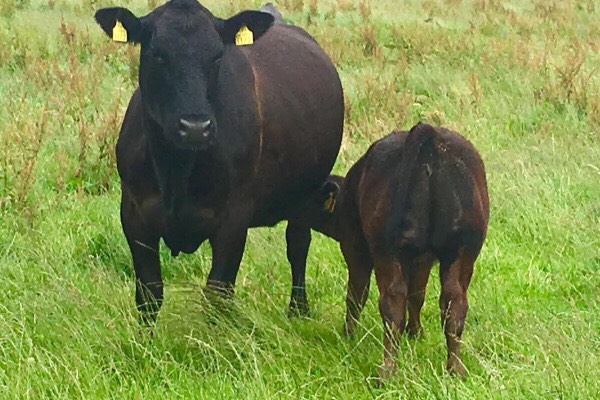 Calving strictly runs from October 1st to December 10th and then from April 10th to June 10th. “This allows for easier management, vaccinations and weaning”, Stuart expressed.

“While I like to calve down at 24 months, the odd one is 30 months before she calves.”

Meanwhile, he sells pedigree bulls between 14 and 24 months, while he finishs all commercial calves between 22 and 26 months, mainly on a forage-based diet.

“This year, our top-performing calf did 1.8kgs a day from birth to weaning. This calf had already been castrated and was only on 1.5 kgs of meal a day. He was the exception, not the norm, though.”

Stuart makes his own ration which he sells, receiving excellent feedback.

“It is barley-based and includes beet pulp, distillers and soya along with flaked beans and a good mineral.”

“Grass is the most important thing on the farm, especially when working with a breed like Angus that will perform exceptionally well on grass.”

Stuart aims for his first cut of silage in May, “which is unusual for a beef farmer”. “Last year, it had a DMD of 76, which, while not amazing, is quite acceptable for my system.” 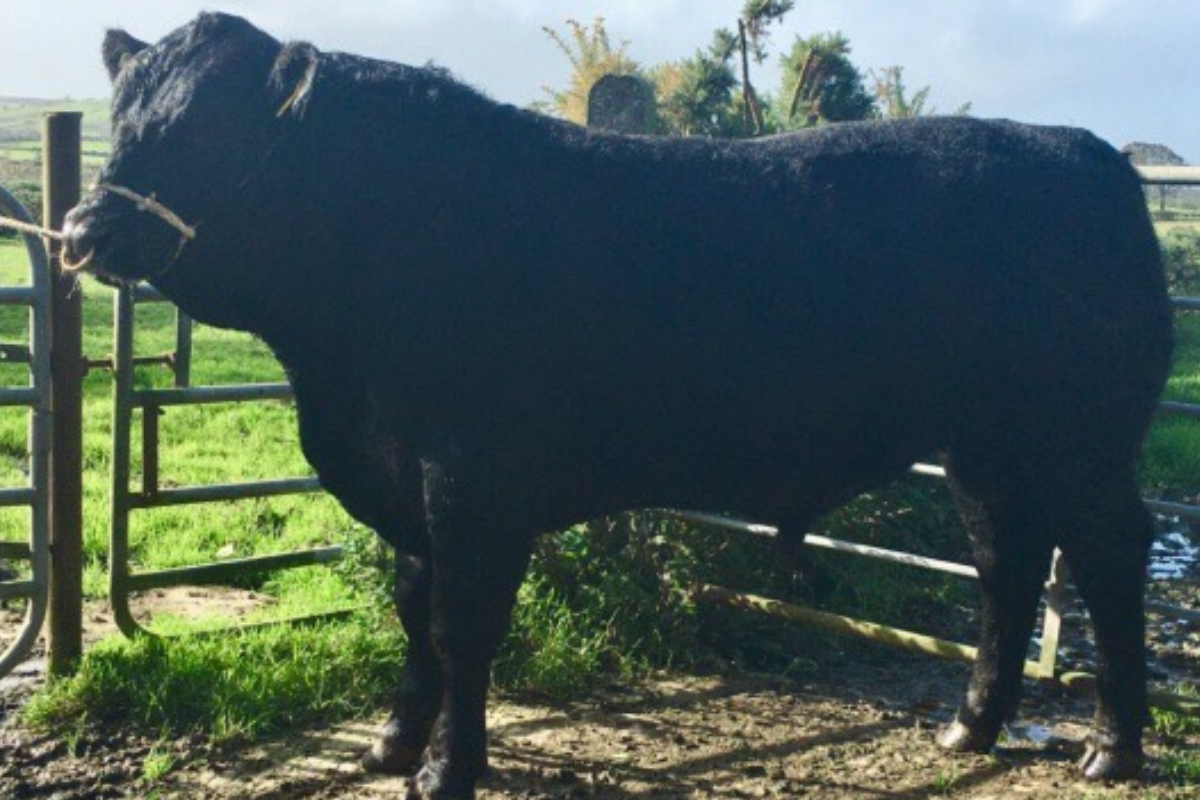 In Stuart’s eyes, efficiency is key when it comes to success in suckler farming. “Set realistic targets and try to hit them,” he advised.

“Grassland management is vitally important. I make most of my money from cattle at grass and join all the schemes you can.”

One of Stuart’s biggest challenges since embarking on his farming venture was “changing from continental cattle to Angus without buying dairy-crosses”.

Looking forward, he aims to keep his cow numbers at around the 100 mark, while aspiring to improve their performance.

In Stuart’s opinion, the future of suckler farming is “grim”.

“We are competing with the by-products of the dairy industry. Whether we like it or not, and as dairy numbers rise, so too will these dairy-bred calves.”

Stuart feels that Irish cattle farmers are not rewarded enough for the quality progeny they produce.

“We produce a premium product and don’t get paid for it. One of the major reasons I am in the situation I am in is because of the work done by those before me.”

“If I had to rent land at €250/acre, I couldn’t do it. It’s that simple, and in reality, most people reading this could easily do what I have done if given the same resources”, Stuart concluded.