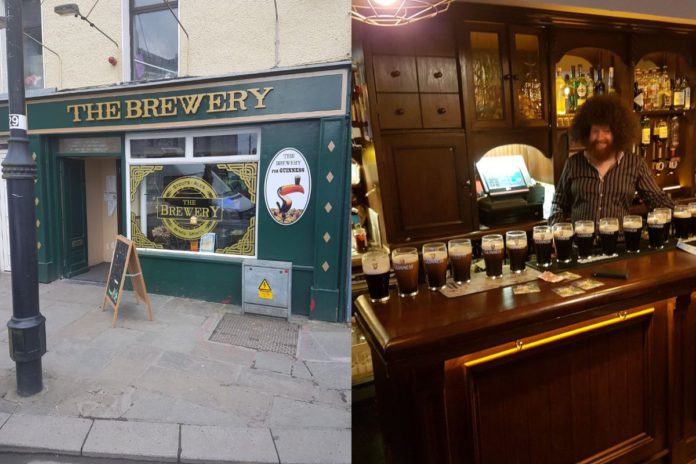 ‘Selling a pint or a heifer comes naturally to me’

Livestock auctioneer, Matthew Donnellan, turned his hand to a new trade last August by opening a lively watering hole in the heart of County Roscommon.

The Brewery – which the Bailieborough, Co. Cavan native and Patrick McEnaney own – has blossomed into a thriving social hub.

Matthew has cited his connection with the farming community – through his work as an auctioneer – as one of the main drivers of business growth.

“I was coming through Roscommon one day in June and spotted the sign on a pub for lease,” he explained.

”Patrick and I identified Roscommon’s potential and decided to take it on. I never worked in a bar until I landed in Roscommon, so I was thrown into the deep end.”

“The people of Roscommon are fantastic and have been very supportive. The business is doing very well since we hit the ground running,”

”The tap is always flowing and the music is always rolling, so it is keeping us on our feet.” Matthew added.

While the running of this operation is a new venture for Matthew, he is not your average newbie publican.

He is a long-standing livestock auctioneer, specialising in cattle and sheep sales.

He embarked on this career back in 2000 but also knows what life entails for those at the other side of the ring.

“I was reared on a suckler farm on Cavan soil. At 14, I began going around marts daily to deal in livestock, mainly suckler pairings.”

”My venture as a cattle dealer gradually progressed into a break into the auctioneering trade.” Matthew explained.

Besides, he dabbled in the sale of property for years and once owned his own office.

But after time, decided that his ultimate focus should be on his first and foremost interest – the livestock mart scene.

Livestock auctioneering is now a part-time commitment for him.

He can be found officiating as an auctioneer at sales in Ballyjamesduff; Drumshanbo; Ballybay; Mayo-Sligo; Aurivo Ballinrobe and Aurivo Balla.

Donnellan is renowned for his sense of wit and with his musical ear can “break into a chorus of a country or folk song without a warning in the middle of a sale”.

“I am a people’s person and that is why selling a heifer or selling a pint or whatever it may be, definitely comes naturally to me; it is something that I immensely enjoy. I get a great kick out of it.” Matthew explained.

As his new business continues to sky-rocket to success, now being the cornerstone of Roscommon town, Matthew is quick to reveal that he will not be hanging up his white auctioneering coat anytime soon.

“The plan is to do more livestock auctioneering as time progresses. I am thinking of opening up a yard in the West of Ireland to do machinery auctions, as I also sell at those.” Matthew concluded.

If you are a Livestock Auctioneer and you want to share your story, get in touch – Email [email protected] and you may just be featured on That’s Farming next week.