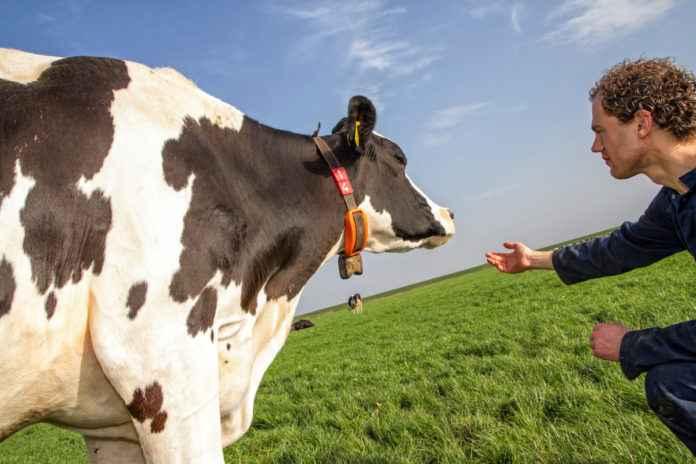 A company from the Netherlands has developed a new piece of technology that has the potential to detect illness in cattle at an earlier stage.

The ailments that the device can detect include ketosis, mastitis and digestive problems.

The sensor is described as a ‘Fitbit for cows’, where the animal’s movement is tracked on a daily basis and the data from the device is used to determine the health status of the animal.

The company having running trials on 2 commercial dairy farms since January 2018, each milking 100 cows, to test the true value of the device.

The data from the trial showed that the number of treatment days greatly reduced for the animals wearing the sensor.

“These are great results and it shows that farmers who use technology such as Ida, to intervene much sooner. When Ida notices a reduction in rumination time for example, a farmer can act on it,” explains Niels Rutten, researcher at Connecterra and coordinator of the trial.

“A farmer may not always spot that a cow is eating less or lying more, but these behavioural changes are often the onset of disease. Having Ida means the farmer can check on the cow and prevent the disease from getting worse or clinical, hence leading to an overall drop in treatment days per cow.”

Rutten cited the early detection of E. Coli mastitis as an example of some of the diseases the device was able to detect.

One of the farmers who participated in the trial, Andy van Rossem, said he could clearly see the benefits of having a greater insight into animal health on his farm.

“Mastitis is one of the diseases that Ida detected at a very early stage. I get notified in the app when there is a little drop in ruminating and eating behaviour of my cows. I can then check on them and start (preventive) treatment sooner.”

“For a costly disease such as mastitis, it makes all the difference to be 1-2 days earlier with the start of treatment,” he explained.

Connectera stated that keeping cows healthy can save a farmer a lot of money per year and reduce loses. Wageningen University in the Netherlands calculated that mastitis costs a farmer €240 per year per lactating cow.

“Keeping cows healthy helps in maintaining a resilient farm. Healthy cows reduce veterinary costs or losses when a cow dies or has to be replaced. Let Ida help you prevent unnecessary costs! Ida can reduce days of treatment and hence total antibiotic use.”