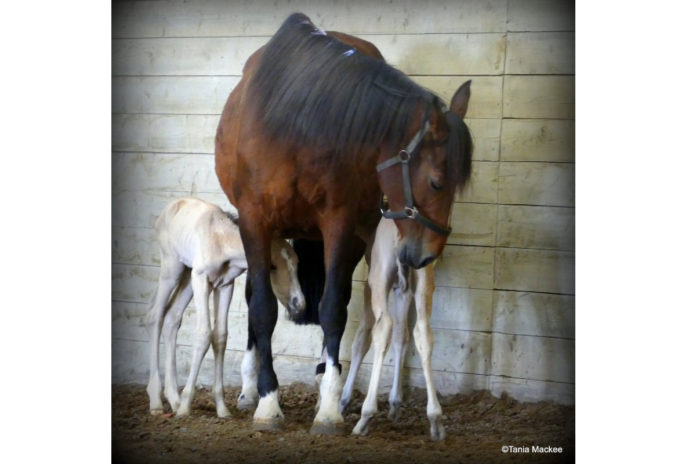 A mare has defied the odds by miraculously giving birth to a second set of twin foals.

GFS Sporthorses’ mare, Destiny, had a filly and colt last month, according to the owner, who described the delivery as “brief” and “relatively easy”.

In a post on social media, GFS Sporthorses said: “On the 26th February, following an otherwise uneventful pregnancy and a textbook delivery to full-term, our fantastic mare Destiny foaled a perfect pair of foals – again!!”

“Both Destiny and her two foals were on their feet and all three enjoying a well-earned feed rapidly.”

“The two little ones zooming around the stable and exploring their surroundings and no doubt enjoying more space than they had become accustomed to!”

Destiny had been scanned with only one ovulating follicle with a single foetus detected.

“At no stage during her pregnancy was there the slightest suspicion that there was anything unusual.”

“Twins, as most of us know, are not desirable due to their poor survival rate and the inherent danger to the mare.”

“This is why we routinely scan for multiple pregnancies and take immediate action in a timely fashion upon the discovery of such; neither is it common for a mare to carry to term and produce two healthy twin foals.”

Two years ago Destiny, produced another set of foals – these, the social media post added, were monozygotic and the genetically identical twin colt foals.

“The twin foals produced this year are not. GFS Shockwave and GFS Aftershock, born in 2018 not only survived but were both fit, healthy and highly athletic with winning characters.”

“They are now both in super homes with the smaller foal, GFS Aftershock, now in a showjumping home where he will be produced professionally to make the most of his incredible speed, balance and agility as well as his fearless attitude.”

“I am well aware that despite the miracle of this incredible event and the likelihood of two sets of healthy twins being born to the same mare being akin to being struck by lightning twice, there will be many people choosing to put a negative and unkind slant on this.”

“That is fine, we are thrilled that both twins survived and feel that it is a balance of fate, luck excellent care and probably a pinch of fairy dust too that saw these two little miracles arrive, survive and win our hearts!” the social media post concluded.

- Advertisement -
Previous article
PHOTOS: What weight is this calf?
Next article
Up to €3.00/kg for weanlings at Gortatlea