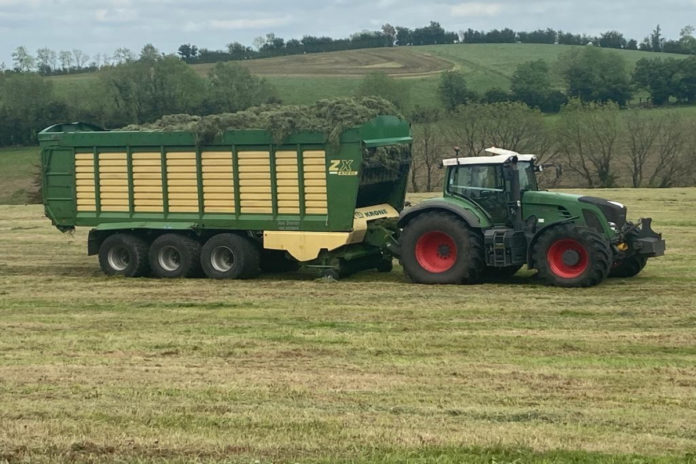 Making the machinery pay for itself

The Co. Meath native’s journey into contracting began about 20 years ago, when he decided to upgrade the equipment he had inherited from his father.

These upgrades came at a price, and Joe decided these machines needed to start paying for themselves.

He started out offering slurry, mowing and topping services to half-a-dozen neighbours in the Kells area, before taking the leap in the early 2000’s to start offering the full silage service.

However, it wasn’t until Doran invested in silage wagons that the business really started to expand.

“We bought a new wagon and there was a contractor beside us that recently stopped operating. There were a few people around us at the time that wanted the same service, so they just rang looking to see if we could do it. We took on about 10 or 15 customers from that,” Joe explained.

A number of extra labour units were needed to support this growth of the business, especially in the summertime.

Joe told That’s Farming that between the dairy and contracting enterprises, he currently employs one staff member on a full-time basis and has a number of seasonal and part-time staff to help throughout the year as well.

“They seem to be a good tractor. You can get plenty of hours out of them and they last for a long time if you look after them and maintain them.”

These tractors pull 2 Krone silage wagons – a tri-axle 470 and tandem-axle ZX400 – as well as a McHale Fusion 3 baler.

Last year the baler made 4,000 bales during the season, but he hopes to increase this closer to 10,000, while also cutting back on the number of acres of pit silage.

He cited a lack of profitability as the main reason for cutting back on pit silage. Although this year has been good due to the favourable cutting conditions, he doesn’t feel it will be sustainable for much longer.

“Most of my machinery is nearly paid for, so I’m of the opinion that I’ll scale back and do more profitable jobs. On the scale of work there is in Ireland, it’s very hard to see machinery paying for itself in a 2 or 3-month season.”

“We bought the fusion 3 years ago and we’re interested in doing more baling. It seems to be more profitable than silage harvesting.”

When the Meath-native was contemplating which method of harvesting he was going to invest in, his thoughts went back to the reason he started contracting in the first place – to have the machines pay for themselves.

With that in mind, the forage wagons were the more sensible choice.

“We use the wagons for drawing the peat as well in the winter. There’s no one with a silage harvester that’s working 12 months-a-year.”

While his time in the pit silage game is coming to a close, the business won’t be slowing down any time soon.

Now that he has found the jobs with the greatest return, he has started to forge a name for himself in these industries and will continue to grow his business.

“We like drawing the peat, that’s kind of the main job nearly and what I plan to keep doing. We travel all of the northeast and deal with a few purchasing groups, Louth and North Co. Dublin seems to be a strong area for it.”

If you want to contact Joe to avail of his agricultural contracting services, call 086 893 9899.