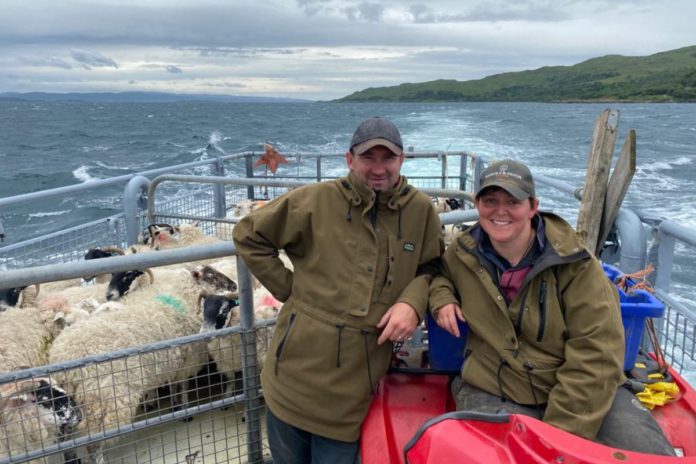 In this week’s Suckler Focus, That’s Farming, speaks to Jo and Chris Fewster about managing a large-scale operation comprising over 300 Luing cows and 1,800 sheep. They discuss all-year-round calving, having cattle outdoors year-round, virtual fencing, teams of 18 bulls and calving heifers at 24 months.

The Cadzow Brothers are credited in the bovine circles for developing their own cattle breed, Luing.

They created the breed in the inner Hebrides, off the west coast of Scotland, by combining a Highland’s hardiness and a Beef Shorthorn’s ease of fleshing and meat-eating qualities.

The red-brown breed, which is extremely hardy and moderately sized, traces its roots back to 1947.

It is the result of three brothers’ desire to breed a maternal female with abilities to raise progeny against the backdrop of adverse weather conditions.

The British government recognised Luing, one of the first new breeds of cattle in the UK in over a century, in 1965, and since then, it has made its way around the globe.

The family continues to farm the breed, and Jo Fewster and partner, Chris, co-manage the operation in Isle of Luing (pronounced Ling).

“Shane Cadzow, the son of the three Cadzow brothers who created the breed, is still actively involved with the farm, as are his wife, Tooti, and two sons, Archie and Jack.”

“We also have two full-time stockmen, Bobby Campbell and Ruairidh Mackinnon, who are integral to the farm.”

“This farm was purchased by the current Shane Cadzow’s father back in 1947. Before purchasing Luing, the Cadzows primarily farmed on the east coast of Scotland as grain farmers and fattened store cattle.”

There are currently 312 breeding females on-farm, plus 50 in-calf stock heifers. All Luing cattle are pedigree by nature, but they are farmed commercially and share the pastures with 1,800 cross-bred sheep.

“The 1,543ha of Isle of Luing is one farm, and the Cadzow brothers own this. We also farm several neighbouring islands, totalling 3,885ha.”

The breed is renowned for its hardiness, withstanding the wet, bitter west coast winters, living outside all-year-round and calving outdoors.

They are also long-living, with most cows producing 9-10 calves or more in their lifetime.

Luings are designed to flesh from forage alone as efficient foragers and converters of feed energy. They “make the most” of the forage available to them and are “perfectly” suited for grass-based outdoor systems.

Jo listed the original qualities that the Cadzow brothers bred Luing cattle for: 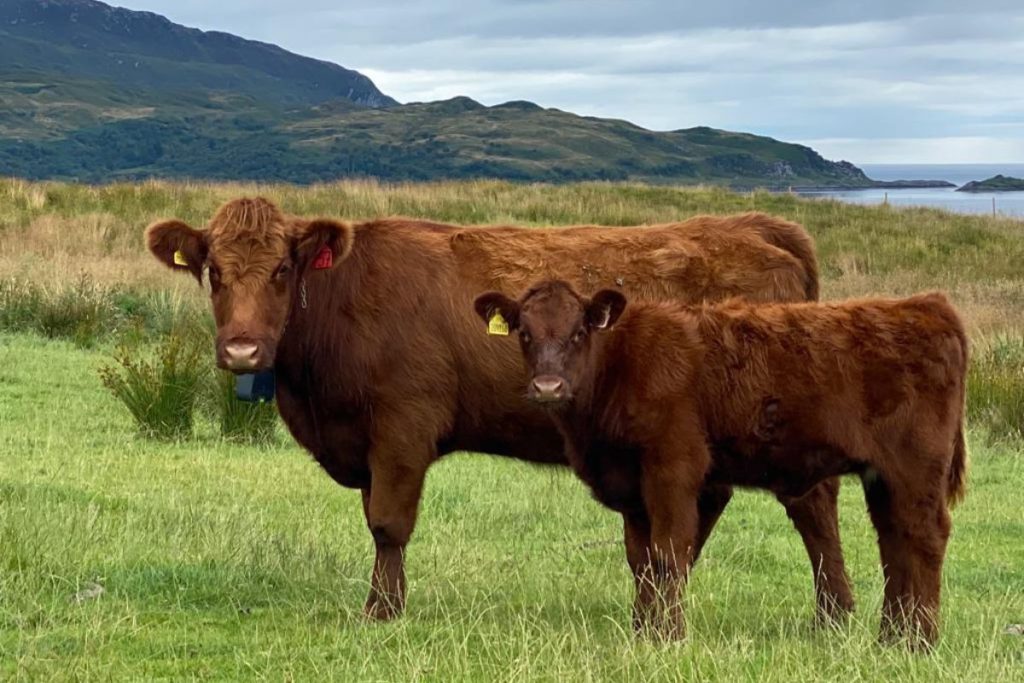 Their cows run in six family groups on their own hill territory. Any retained heifers return to the hill of their birth. They have six bull families and a total of 18 stock bulls on-farm.

Each Luing bull can trace its ancestry down its family lines back to the founding bulls, namely, Trooper, David, Monarch, Superior and Callum.

Bulls go out into cow groups of 20-35 on May 10th, working in their family teams to serve individual cow families for two crops before moving on to the next cow family.

All bulls are fertility tested before they join the pastures with cows. Bulls go out for 12 weeks, switching cow groups at the halfway point.

“All of our bulls are profiled with the Luing Society. Therefore, we can do sire verification for any calves if we have any doubt as to who the sire is.”

“We calve down from mid-February. By the time young calves are demanding more milk in April/May time, the grass is through, and cows are milking well. Our calves receive no creep and are weaned early to mid-October.”

“Compact calving is very important to us. We treat all of our pedigree cows commercially. 91% of our in-calf cows this year will calve in the first six weeks of calving season.”

They scan all breeding females – cows and heifers, with 2021 yielding satisfactory results as follows.

A selective breeding policy is driving performance on the large-scale farm.

They currently keep all heifers on-farm until they are 21-months-old. Besides, they weigh all females at 400-days-old, and they put anything 380kg or above to the bull.

They bring anything below this weight threshold to a neighbouring island to graze and offer them for sale as a breeding heifer at a later date.

“Calving down at 24-months-old suits our system. It means we get an extra productive year, so to speak, from them, and it prevents them from becoming too big. It encourages the development of mammary cells instead of them laying down fat.” 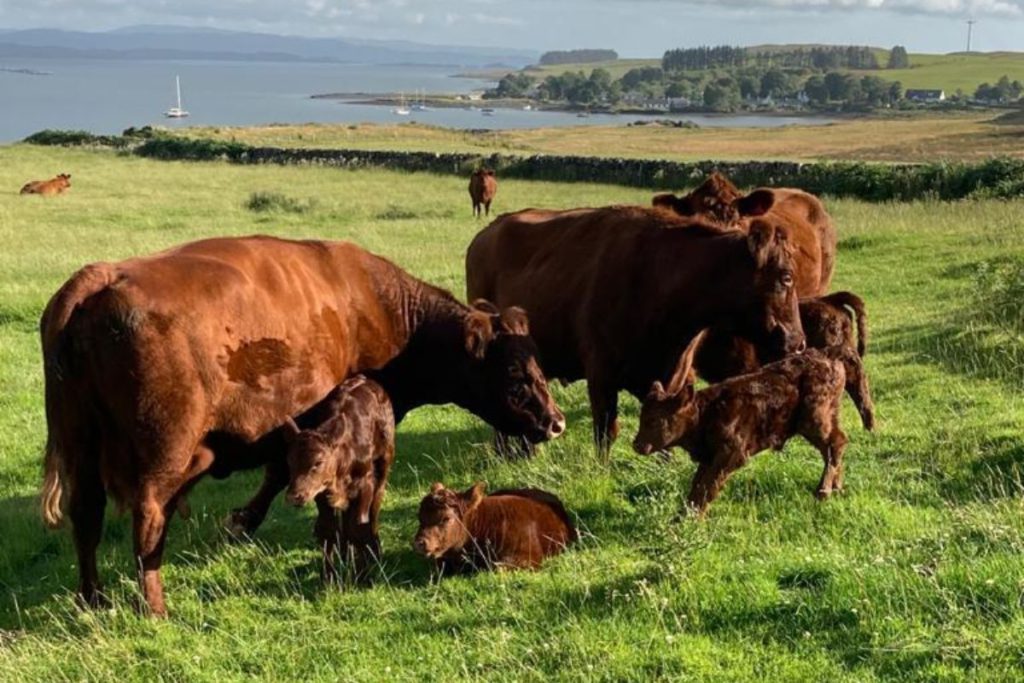 They wean male calves and sell these as store steers at Oban Market each October. The only animals they take to slaughter are young bulls that do not make the grade for breeding.

These are brought to 650kgs when they are sold to ScotBeef. They retain a small number of bull calves each year as potential breeding bulls.

This year, they started with 31 bull calves out of an initial 134; however, by the time January/February comes, they will “slowly cut” this number to just under 20.

“Bulls can be rejected as breeders at any point. We use weights and stature measurements as minimum standards. We reject bulls for poor conformation, physical defects and temperament.”

“Moreover, we are not just looking for why these bulls could be good breeding stock. We are looking for why they might not be. It is the ‘why nots’ that get cut from the programme. Only the very best Luing bulls make it to become a breeding bull here.”

“We are strict when it comes to culling. Anything that does not successfully get in-calf when our bulls go out gets one further chance at one cycle with the bull.”

“If she is empty again, then we cull her. Anything in-calf after the October bulling is calved down in august and then sold with a calf at foot. We cull anything with feet problems, fertility, multiple assisted calvings or bad temperaments.”

The herd’s average calving interval is around the 362 day-mark, and it is running at 96% conception this year. “We do not keep underachieving cows,” Jo stressed when commenting on herd performance. 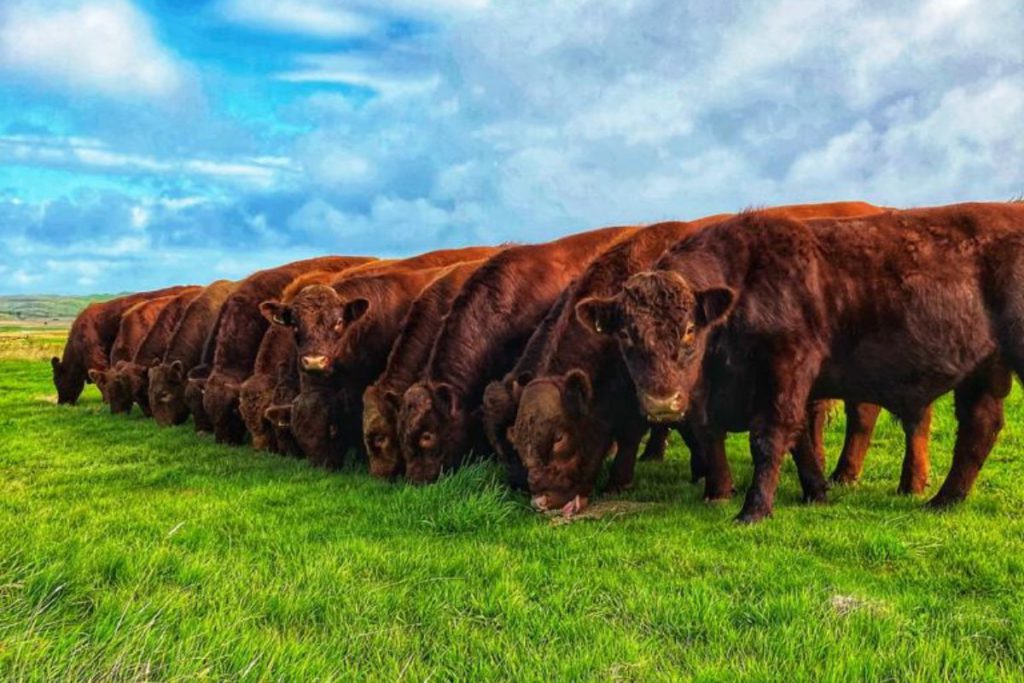 Along with genetics, grassland management is becoming increasingly important in the enterprise, with a substantial shift towards mob grazing.

Sheep move in a larger circuit around the whole island, while cows move in smaller circuits around their hill territories.

The farmers have embraced virtual fencing and use Nofence collars to split the hills into manageable paddock areas without using physical fences, which would be “nearly impossible” for them to do with the terrain of the land.

“We have only been using the system since June but are already seeing hugely promising results. This, in turn, should allow us to increase our stocking density and reduce inorganic fertilisers and sprays.”

As mentioned, the herd is split into six cow families across six hill territories across the island.

Currently, the Ardluing herd in the south of the island are mob grazing their territory with no-fence collars. “This, in turn, will hopefully be spread across all cows and hills.”

Grazing sheep instead of using glyphosate

This year, they utilised sheep in silage reseeds instead of using glyphosate to spray off fields.

Furthermore, they grazed fields nearly bare with sheep, directly drilled into this land, and then held sheep on there until new seeds emerged.

They then remove sheep for seven to ten days before grazing the new growth and encourage it to tiller out. “This seems to have been successful so far,” Jo remarked. 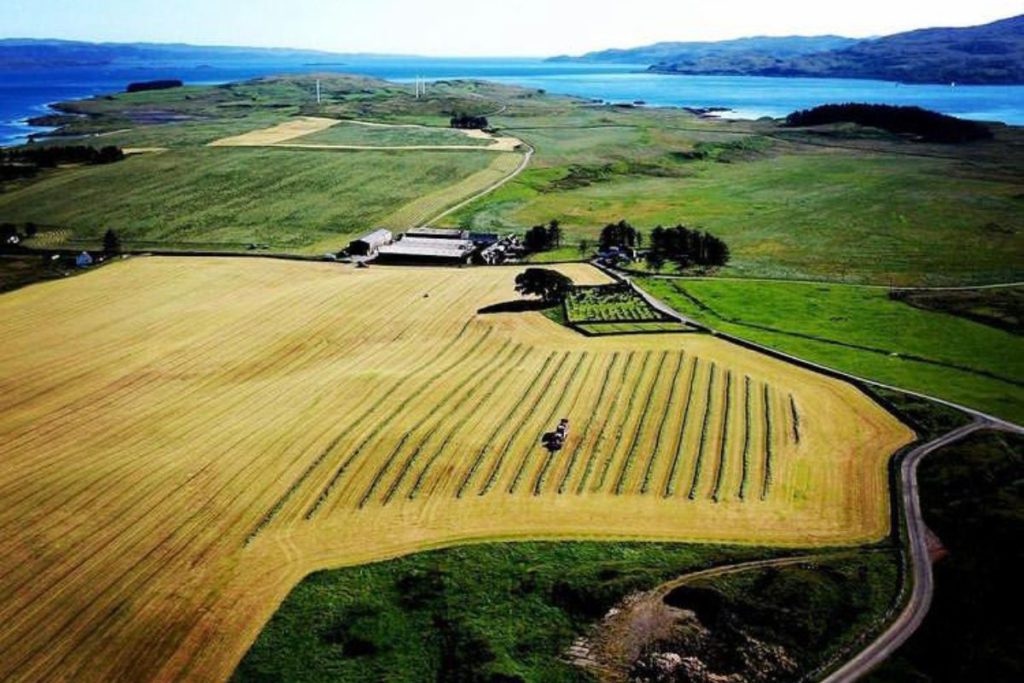 Despite its strict breeding and culling policies, coupled with its 6-week calving rates and scanning figures, the co-managers believes “there is always room for improvement”.

They view setting your targets and sticking to them as paramount when running a suckler operation.

“Give yourself actual goals. We use performance recording with Signet and so can compare all of our animals EBV’s, as well as our own knowledge on each animal.”

“It is important that you do not just let the herd bumble along. You must be prepared to cull or sell animals that do not fit your system or targets.”

“The size of our herd may expand as the grass develops through mob grazing. Next year, I would like to be able to get more heifers up to bulling weight by 400 days.”

“The herd’s conception rate is already running at 96%, but it would be nice to reach 98% or more, which was the Cadzow brothers’ original aim when establishing the breed.”

“I think with all aspects of farming, it is important to keep future-proofing. As a business, we have also diversified into a shoot, deer stalking and are putting up glamping pods. Also, we would like to supply Luing beef, lamb and game direct to the public.”

“I think with increasing public and consumer pressure, we must start communicating and showcasing our animals and products better.”

“While the cows have been here establishing and proving their worth for over 70 years, it is our first year as managers here.”

“While there is always room for improvement, it is important not to forget the management techniques that got the breed to where it is today. Integration of old and new, go hand-in-hand with the progression of anything, be it farming or otherwise,” Jo concluded.

To share your story, email – catherina@thatsfarming.com  Do you breed Luing cattle? If so, get in touch.

- Advertisement -
Previous articleDiary: More per lamb this year than those 10kgs+ heavier last year
Next articleSuckler herd decline not a ‘contributing factor’ to EPA’s environmental concerns