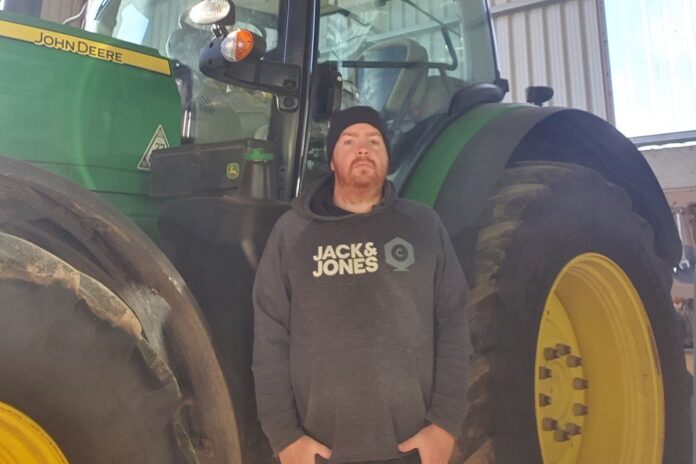 ‘There is just no money in it anymore’ – ag contractor

Eoin Lynch from Tallanstown, County Louth, left school at the tender age of sixteen and established his agricultural contracting business, making 2,000 round bales of straw in year one and offering a complete silage service.

Furthermore, he invested in a John Deere baler and a tractor in year one, then a new John Deere 578 round baler and a new McHale wrapper the following season, using tractors on the farm in the early part of the business.

He reached 15,000 bales at his peak, but since then, this bale count has reduced to below the 10,000 mark on the back of increased demand for pit silage.

The then-teenager, who hails from a small tillage enterprise, “caught the machinery bug from a young age” as he used to help his father, John, a digger operator during winter.

“I always had an interest in farming, so that is what led me to the agricultural contracting side of things, and the business went from there,” Eoin Lynch, who completed his Green Cert at Ballyhaise Agricultural College, told That’s Farming.

In 2008, Eoin and his father established L&L AGRI HIRE LTD and invested in a silage harvester with many customers expanding their herd sizes and constructing silage pits.

“We never had any plans to do silage harvester work and services, but with our bigger customers went away from baling and went towards pit silage, so we ended up with the harvester.”

Today, the father and son operate the business, employing up to four part-time staff during silage season, serving a 20-mile radius from the base. The firm builds up its customer base through local advertising and word of mouth.

The father and son have a range of services for farmers to choose from, including mowing, raking, baling, wrapping, pit silage, tractor and dump trailer hire and plant hire work.

“Repeat customers are your bread and butter; if you do not have them, you will not know if you are coming or going from one year to the next.”

“For example, I am still working for customers I started with in 2000 with baling, which is 22 years now.”

“To be honest, we try to do every job to the best of our ability because one bad job can lead to you losing another couple of jobs further down the line.”

Baling remains the firm’s most popular service, making up to 9,000 round bales annually, mainly silage with 700 each of straw and hay.

“Between May 15th and June 15th, all first-cut silage customers are done, then it cools off, and customers that do bales start from then on in.”

“We service tractors every 400 hours and do 95% of their own maintenance.”

“I used to try changing machinery a good while back, but with the cost of machinery over the last two years, we have taken a different approach and put more money into servicing tractors and doing extras on them to keep them up to a high standard.”

Challenges they face include diesel prices and machinery costs,

“I think all agricultural contractors have put their rates up this year, but it only covered running costs as labour is dearer”

“Also, diesel has doubled in price or maybe gone up threefold since the year before, and all your spare parts, filters, engine oil, and all that have gone up too.”

“Rates we got this year only covered diesel, and it did not cover anything else, never mind machinery prices.”

The future of Irish agricultural contracting

In his eyes, the key to running a successful agricultural contracting business is to “keep costs down and do the job right”.

The father and son intend to continue with current operations with no further planned machinery investments as it stands.

“I do not know what the future of Irish agricultural contracting holds.”

“However, looking at New Zealand, England, Australia and America and their situation with labour, they depend on people leaving other countries to go to their country for the summer months to drive tractors to get the work done and if they do not have that they would not get the job done.”

“I feel that is probably the future for here in Ireland. In my view, the next generation coming along has no interest in agricultural contracting.”

“Honestly, I cannot blame them because it is unsociable hours; you do not know when you are coming or going, and there is just no money in it anymore.”

“Farmers this year got raised money for milk, beef and grain, and if that drops way off next year, they are still paying big money for everything else.”