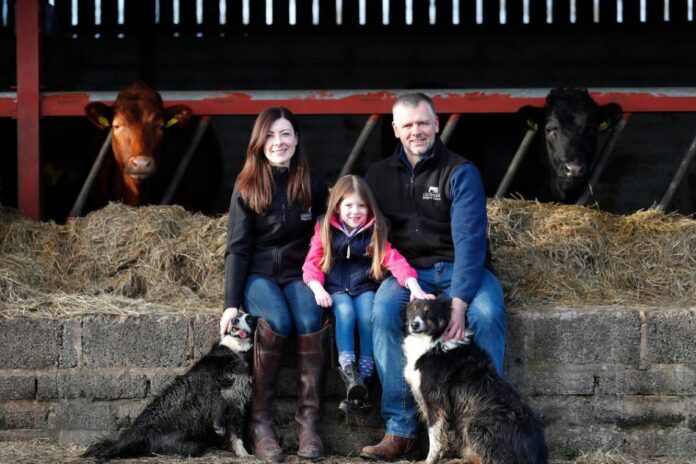 ‘Our heaviest steer to date was 289kg’ – Dexter breeders

Mervyn and Rachel, owners of pedigree Dexter cattle, also farm a herd of Irish Moiled cattle, alongside a flock of pedigree Charollais sheep.

Their daughter, Sommer, inspired the name of their sister-herd, Sommerville. She also has an interest in helping out on the farm.

It is no surprise that both Mervyn and Rachael have taken to the agriculture industry, with farming being a tradition on both sides of their family.

“I am the seventh generation of my family to live and farm at Loughside.”

“My parents and grandparents were dairy farmers. My father later diversified into an open farm. The farm was then conacred out to another local farmer before we took it over in 2014.” Rachael tells That’s Farming.

Mervyn also grew up on a farm where his parents rented their house and, he would have helped the farmer there with his sheep and cattle. Mervyn’s parents also had pigs and turkeys while he was growing up.

Mervyn and Rachael started farming in Loughside in 2014 with three pedigree in-calf Dexter cows with calves at foot and some cross-bred ewes.

“At the time, we had no real idea of the direction we were taking.”

Mervyn was employed as an electrical supervisor up until Christmas 2021. After becoming ill with Covid-19, he decided to take a sabbatical from work and concentrate more on the farm.

He focused on developing the beef and lamb enterprise. Meanwhile, Rachael is employed as a crew commander at Belfast International Airport. 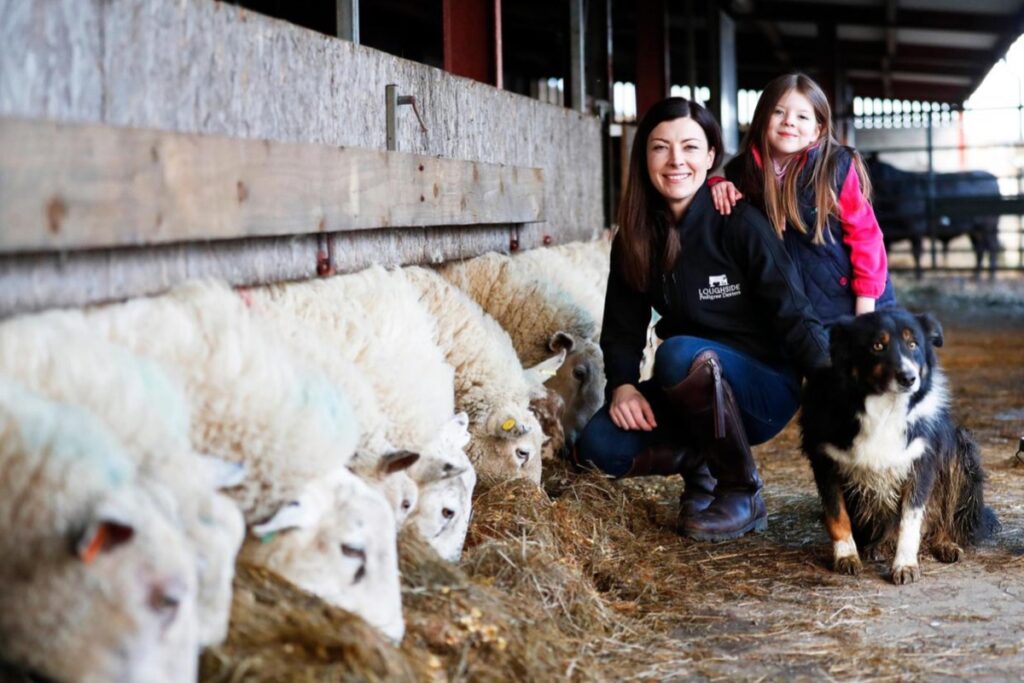 They have increased cow numbers each year since 2014.

“This is mainly due to demand through the local butcher where all our beef is sold.”

The family farm made its largest on-farm investment at the end of last year in the form of a large shed.

“We know roughly what we want to finish in the year, and we have now started to be more selective in our breeding programme.”

It was Mervyn’s idea to select the first breed on the farm, pedigree Dexter cattle because when he did some research, the main traits of the breed he discovered were:

“This suited us because we were both working full-time. The farm is naturally low lying being positioned adjacent to Larne Lough, consisting of heavy, wetland and would keep input costs down.”

“The beef we produce is well marbled with naturally lean fat and also has fantastic flavour,” Rachael tells That’s Farming.

Furthermore, she has also been very interested in the Irish Moiled breed, as she believes they are very similar to the Dexter in terms of their characteristics.

The Garretts purchased two Irish Moiled heifers this year to breed and finish for beef alongside their herd of Dexter cattle.

“I love the whole idea around these two native Irish breeds of cattle and how sustainable the production of beef is through them.”

The farm’s aim is to produce a high-quality beef product.

The beef product that is sold locally, where the customer knows how it has been reared, what it has been fed and travels the shortest distance to its end-use.

Besides Loughside Farm, whose sheep trade under Sommerville, a flock of cross-bred and pedigree sheep is retained.

“Mervyn has also liked the Charollais breed, and he intends on increasing the number of pedigree Charollais ewes.”

“There was no specific reason for choosing these breeds; it was what Mervyn had chosen. I am more interested in the cattle,” Rachael tells That’s Farming.

They sell the lamb to Dunbia; moreover, they also sell lambs through the local butcher, Cleaver and Steel, who also buy the beef from the Garretts. 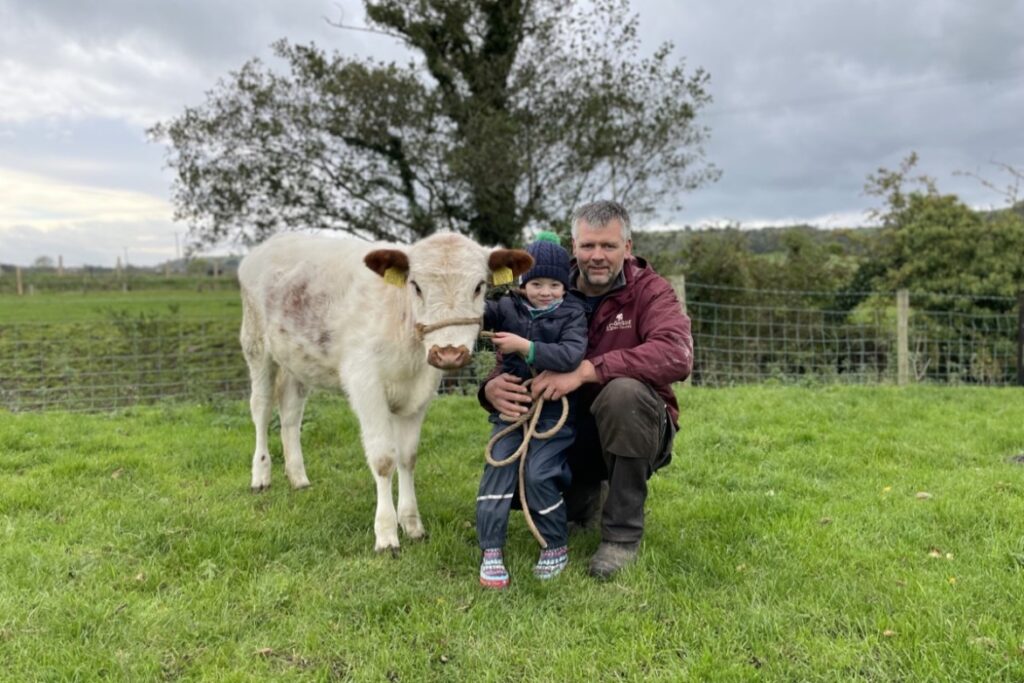 They do not use AI on the farm at present.

“All our cows are bred with our own stock bull, Dynamite Kasabian. We bought him in 2017 and haven’t looked back since.”

“It was a bit of a risk at the time because he was young and unproven, and we didn’t really know a lot about the breed yet.”

“The bull goes in with the cows at the end of June, he usually runs with the cows until we bring them in for winter, which is as late as the weather and ground conditions allow.”

Calving commences at the end of March and normally finishes on the farm by the end of June.

“The reason we calf at this time of the year is to try and get the majority of the lambing out of the way first.”

“Secondly, to try and get the cattle back out on the grass so calving takes place outside.”

They retain the steers on-farm and are finished for beef, between the age of 24 to 36 months. This is dependent on demand.

“Our steers usually weigh out at an average of 230kg cold weight, and our heaviest to date was 289kg.” 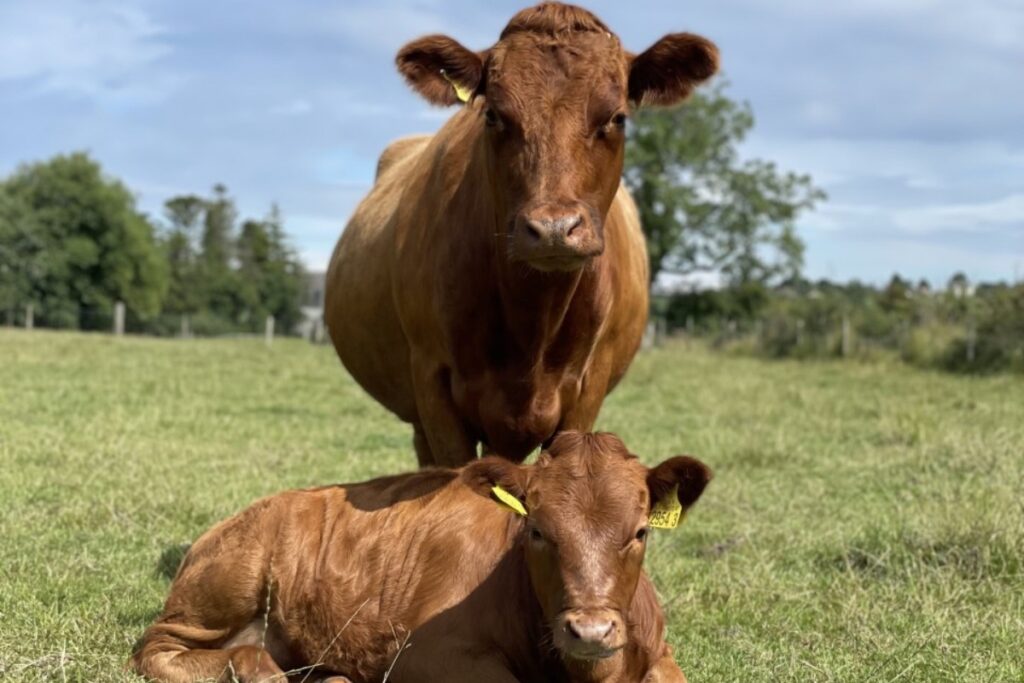 Loughside Farm is Farm Quality Assured, and they sell all the beef through the local butcher, Cleaver and Steel, in Ballycarry Village.

“We also have recently put some of our finished steers through a scheme Marks & Spencers were running for pedigree Dexter beef. The scheme offered £4.80/kg.”

They sell heifers for breeding. Meanwhile, they retain some bulls, which they halter-train. Rachael would like to show them before selling them for breeding purposes.

“We are excited about breeding from the Irish Moiled heifers, with the same intention to finish the steers for beef.” 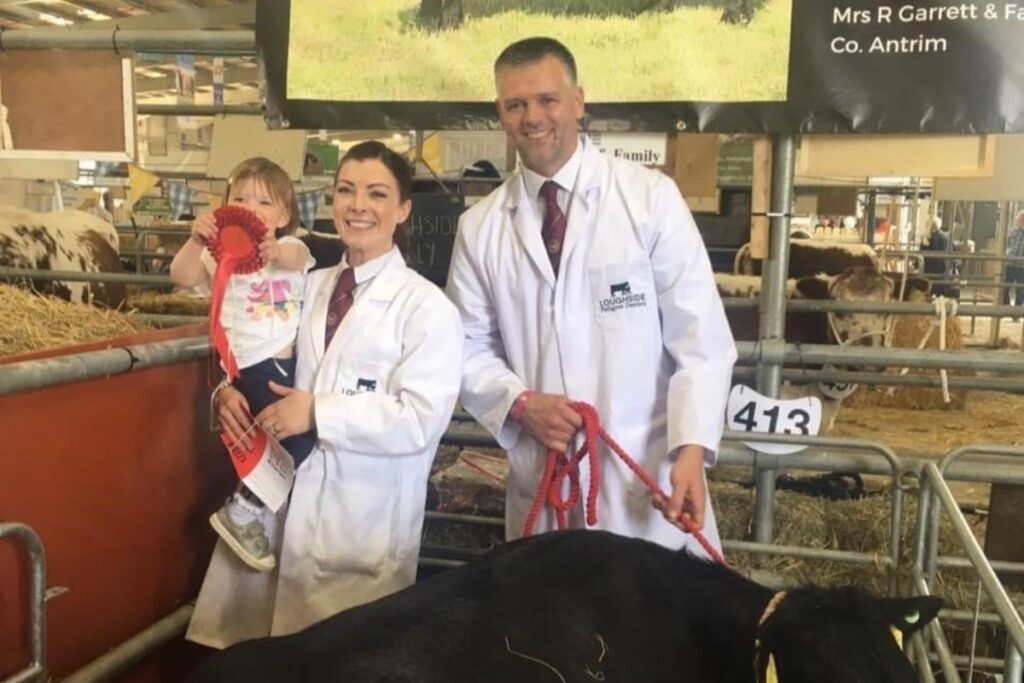 Looking for the future

Mervyn would like to increase the number of pedigree Charollais sheep. With regarding Dexters, the Garretts plan is to be more selective and potentially reduce numbers as they begin to breed Irish Moiled cattle.

“The long term plan is that the farm becomes even more sustainable and we have discussed becoming organic.”

“The last eight years have been hard work for Mervyn and I, establishing and building the farm, as we also welcomed our first child.”

“We also had to invest in infrastructure and improvement of the land due to natural deterioration of not being farmed.”

“The success we have achieved personally so far has been a team effort between us both. I have enjoyed building the business with my husband and daughter.”

“We get a lot of satisfaction from the farm as a business and our passion,” Rachael concludes.