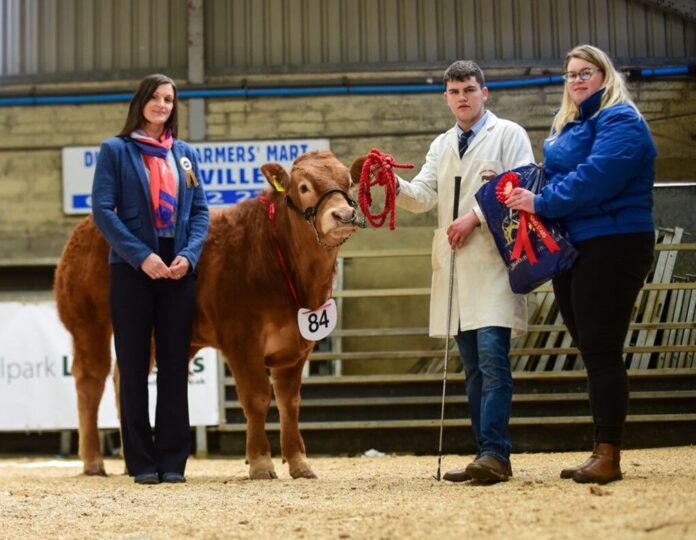 Eight “very enthusiastic, young” Limousin breeders took to the show ring to compete against one another in their first young handler competition of the year.

The class was open to young breeders between eleven and twenty-one.

The competition took place under the “watchful” eye of judge Laura Hughes from the Pabo Herd in Wales.

According to the club, she is no stranger herself to the “bustling” show ring and with many successes over the years.

“We hope to see these young folk back again when we are holding open days and at the local summer show. Our young people are the next generation of stockmen/women, which is something very special.”

A spokesperson for the club said: “It was great to see so many young breeders showing style and presence, with their Limousin calves, on their first outings to a show ring.”

“Some of our more experienced young breeders also took to the halter to compete. Their handling skills were evident as they get better with every show they attend.”

“Our sponsors, Whinfellpark and the British Limousin Cattle Society provided merchandise for goodie bags that we presented to all taking part,” the spokesperson said.

Yesterday, we published an article from CAFRE beef technologist, Natasha Ferguson, who explained what myostatin is and what it means for your suckler herd.

The impact of herd health problems and dystocia (calving difficulty), in particular, on the profitability of the suckler beef industry is well understood.

A study conducted by Teagasc highlighted that 87% of the BETTER Farm Beef Challenge ROI participants performed C-sections on cows on-farm, with some having up to 8% on cows within the herd.

The situation in Northern Ireland is probably similar. On that basis, we, at CAFRE, deemed it important to start work to examine the relationships between the myostatin gene and a range of health and production traits.

Read this article on myostatin testing.