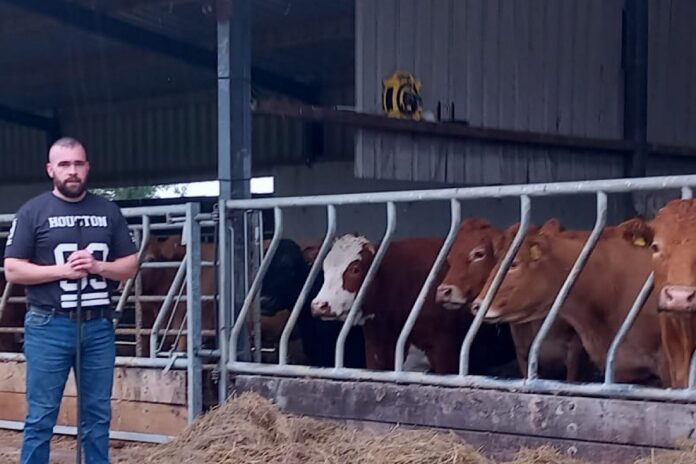 ‘If farmers continue doing things right, there is a good future in suckler farming’

In this week’s Suckler Focus, That’s Farming, speaks to Shane Garry. He discusses establishing his pedigree Limousin herd, juggling a job on a pig farm, aiming for €3.00/kg for weanlings and his outlook on the future of Irish suckler farming.

When thirty-one-year-old, Shane Garry from Ballinacarrigy, County Westmeath, is not a full-time pig stockperson on a 700-sow unit in Westmeath, he is tending to his 23-strong suckler cow herd.

Garry spent nine years in the pig industry, completed a stint in the construction sector and took the family farm’s reins at 27 following his father, Michael’s illness.

Last year, he established a pedigree Limousin herd under the Ballyhug prefix with two females purchases from the Tullyridge herd through a Pedigree Sales’ timed auction and a female at an Irish Limousin Cattle Society sale in May.

The farm’s system has remained unchanged, with Limousin still the herd’s leading breed of choice.

“I always had an interest in pedigree cattle and wanted to do it but never got around to it,” Shane Garry, a 2011 Pallaskenry Agricultural College Green Cert graduate, told That’s Farming.

“In my opinion, it takes a good few euros to start at pedigree cattle breeding; you are talking €3,000 for a heifer, and between one thing and another with building sheds, I never could afford it.”

“So, I was always interested in Limousin cattle, and when I got the chance, I started my pedigree herd.”

He chooses Limousin because of the breed’s visual appeal, hardiness, ease of calving, “good” maternal characteristics, and “good” cull value.

“I find the Limousin breed is in a good position. You have an advantage with your continental cow as you have muscle and terminal ability.”

“I also think the Limousin animal is a better animal to sell in the mart,” he added.

Shane uses two rounds of AI on his pedigree cows, culling outside this window or introducing a stock bull after July 1st.

He serves all his commercial cows using Parkhill Rocky, which he invested in at an Irish Limousin Cattle Society sale in Roscrea this year. 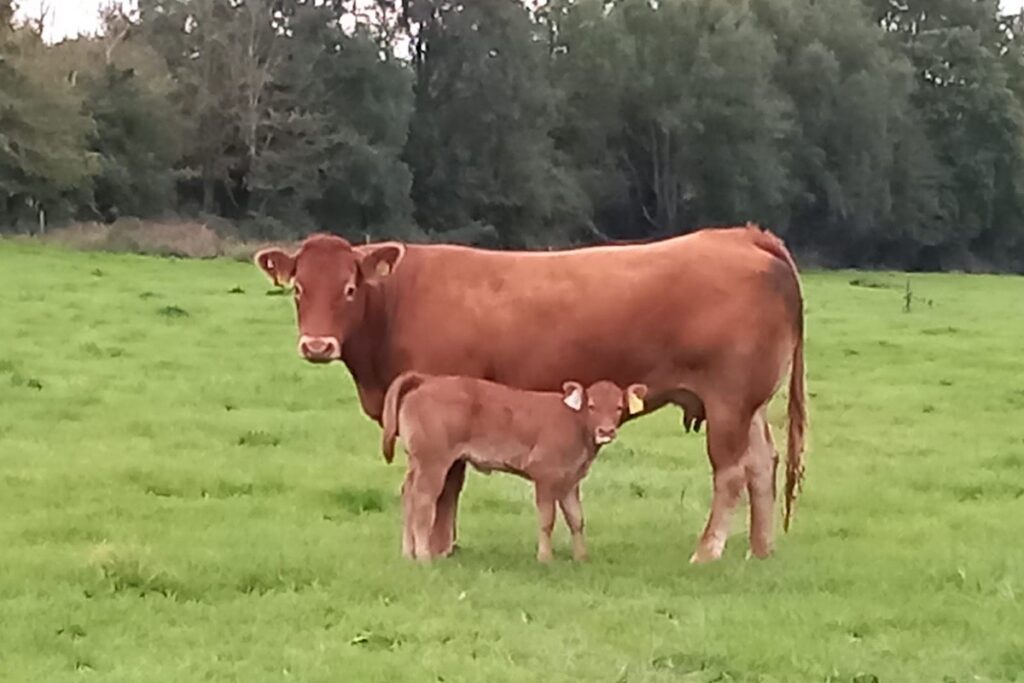 “I find the genetic pool is very good, and you have a good selection of straws to choose from.”

“I think it pays you to go with a more expensive AI straw. For example, I bought an AI straw from Ampertaine Majestic for €65.”

“In my opinion, buying that more expensive straw is a help because they are bulls producing top-quality animals.”

While Shane did not undertake ET work yet, he plans to do so in later years with some pedigree females.

He calves from mid-January to April 1st every year, and in recent times, the farm has benefited from “better” calving facilities and three sheds which he invested in since he took ownership, having out-wintered cattle previously.

He intervenes in up to eight calvings annually and aims for compact calving by removing the bull from the herd July.

According to Shane, the herd’s calving interval is around 360 days, which he maintains by keeping young cows in the herd and taking a progressive approach to herd health. 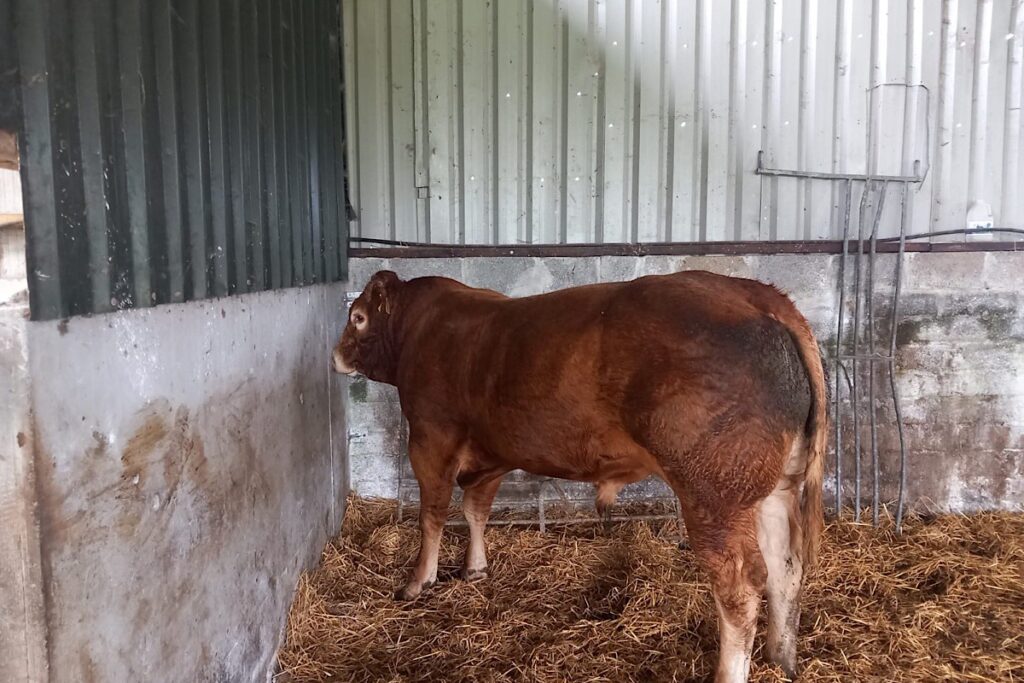 In the past, Garry bred commercial replacements and invested in dairy calves from a neighbour, and retained some as cows.

He keeps up to five pedigree heifers annually to build stock numbers and has a strict culling policy, sending cows to Ballymahon Mart.

Shane sells calves as weanings through the Longford-based mart and feeds them ad-lib creep for ten weeks beforehand.

Bullocks generally weigh around 380kg, and heifers typically weigh up to 350kgs, with a target price of €3.00/kg.

The Westmeath farmer has ambitious plans to attend society sales with bulls and breed stock bulls to run with his commercial herd.

Each year, he purchases commercial cattle through Ballymahon Mart as replacements or springers as he finds it a long window to wait until females calf at 30-months to breed his own.

“I generally select a Limousin-type cow; I prefer continental replacements because you have the cull value.”

“I feel there is good demand for quality weanlings all the time. Most bull calves I sell make €1,000+/head, but heifers can sometimes be a trickier trade, but I aim to make €900/head.”

He manages his grassland by giving cattle 5-6-acre paddocks at a time and, in recent times, reseeded 8-acres in perennial ryegrass and white clover alongside installing drinkers.

While he believes grassland management is “important”, he does not measure grass yet but does top, spray, soil sample and carry out drainage on land.

“In my situation, I found I would not have much time for grass measuring with work.”

In addition, he is planning to scale back on his fertiliser usage – due to rising input costs.

“I intend to plant some multi-species swards because I think the way things are gone, in the future, you will have to have lower input costs.” 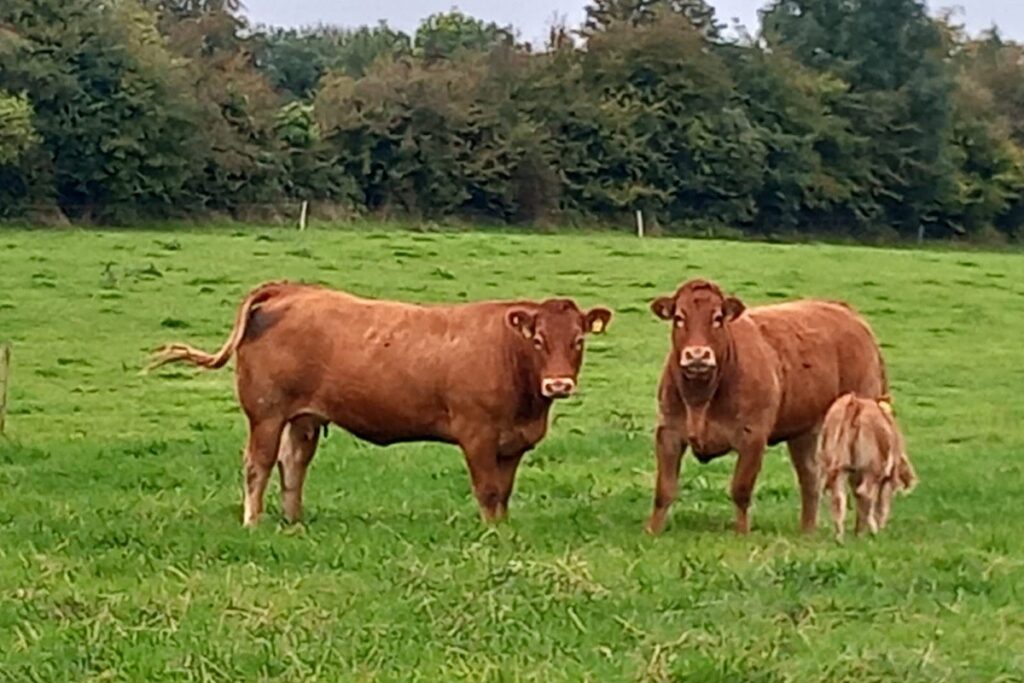 The Westmeath native plans to continue with his current farming system and intends to buy another heifer from an autumn society sale.

He is of the view that “if farmers continue doing things right and breed the right cattle, there is a good future in suckler farming”.

“I think suckler farming will go towards very much having quality animals. I think many farmers will get out of sucklers, and then you have a huge amount going into dairying.”

“Moreover, I suppose with the combination of the two things, quality cattle will be rare, and that has to stand to someone like myself trying to produce quality that you get paid for as time goes on.”

“I need my job as a pig stockman because I would not have any chance of living at home. In my eyes, you have to have a full-time job alongside it, with the farm size I have anyway,” the suckler farmer concluded.