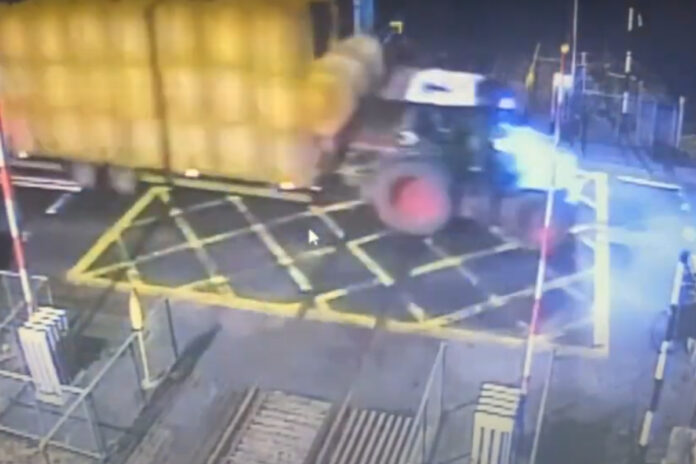 VIDEO: Tractor with load of bales crashes through descending barrier

Irish Rail has released footage highlighting numerous incidents at level crossings, including one case in which a tractor towing a trailer-load of bales crashed through a descending barrier.

The operator of the national railway network of Ireland has appealed to the public to use crossings safely, with special emphasis on safe use amongst commercial road vehicle drivers this year.

Iarnród Éireann has appealed for renewed vigilance at level crossings from all road users. It has reported that incident rates are “significantly” up on 2021, with 54 incidents so far this year.

According to a spokesperson, some of these incidents have been particularly “worrying” and have been widely shared on social media.

The top ten level crossings where incidents have taken place year to date are predominantly in Dublin, as well as one in Co Cork:

There are currently 909 level crossings on the Iarnród Éireann network, a number which has reduced from over 2,000 since the turn of the century.

These are a combination of automated CCTV crossings, manned crossing and unmanned user-operated accommodation crossings, including on farmlands.

As part of its network-wide level crossing elimination programme, Iarnród Éireann is working to eliminate as many level crossings as “practicable”.

According to a spokesperson, almost 300 people die at level crossings across Europe every year.

Data shows that crossing accidents account for 1% of road deaths in Europe but 31% of all rail fatalities.

Although Ireland’s record is “far stronger” than the European average, and there have been no level crossing fatalities since 2010, vigilance is essential, Iarnród Éireann stressed.

However, the company reminds users of the onus to use crossings responsibly.

It has issued the following advice in respect of this: