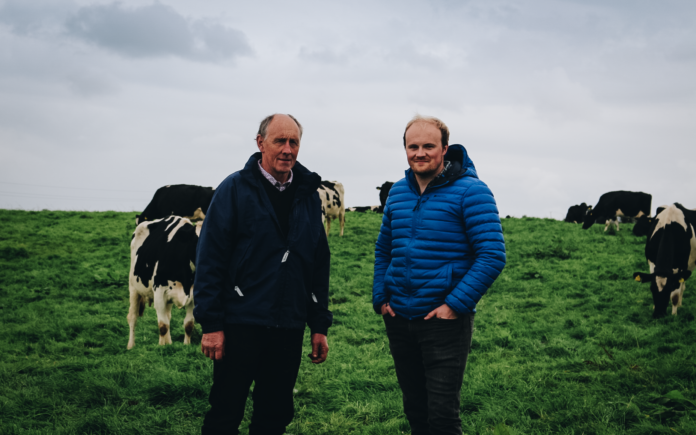 In this week’s dairy farming segment, That’s Farming, speaks to Ed Taylor, a qualified vet, about Letterloan Farm in Northern Ireland. He discusses the collapse of the dairy markets in 2014-2015, maintaining their herd size, year-round calving, sexed semen and the industry’s future.

The collapse of the dairy markets in 2014/2015 was, by far, the biggest challenge Ed Taylor, a farmer and qualified vet claims he has faced.

This period, his first year as a full partner in his family-run dairy business, was “certainly a mind-blowing experience for someone who had never experienced such a collapse in the industry”.

“We were lucky that we were able to navigate it financially, and as my father said at the time – ‘At least you can only look up from here because you can’t get any lower’.” he told That’s Farming.

The University of Glasgow veterinary medicine graduate worked in mixed practices across England, Ireland and the USA for years before returning home to the farm full-time.

Ed runs Letterloan Farm in partnership with his parents – Stephen & Rosemary Taylor –  along with their farm team – Ryan, Jonny and Guthrie (Guthrie has been a team member for nearly 50 years), who are full-time, and Graeme works part-time at the weekends.

The family has been involved in dairying since 1915, having been a mixed farm prior to this. They have been a full pedigree Holstein Friesian breeding herd for just over 35 years. Five generations of Taylors have farmed the lands at Letterloan since the 1800s.

The Taylor family has not increased their herd size in recent years despite the general industry trend to drive expansion.

Instead, they have focused on consolidating their business and have targeted driving efficiencies and building “a very stable and resilient business capable of riding the versatile dairy markets”. 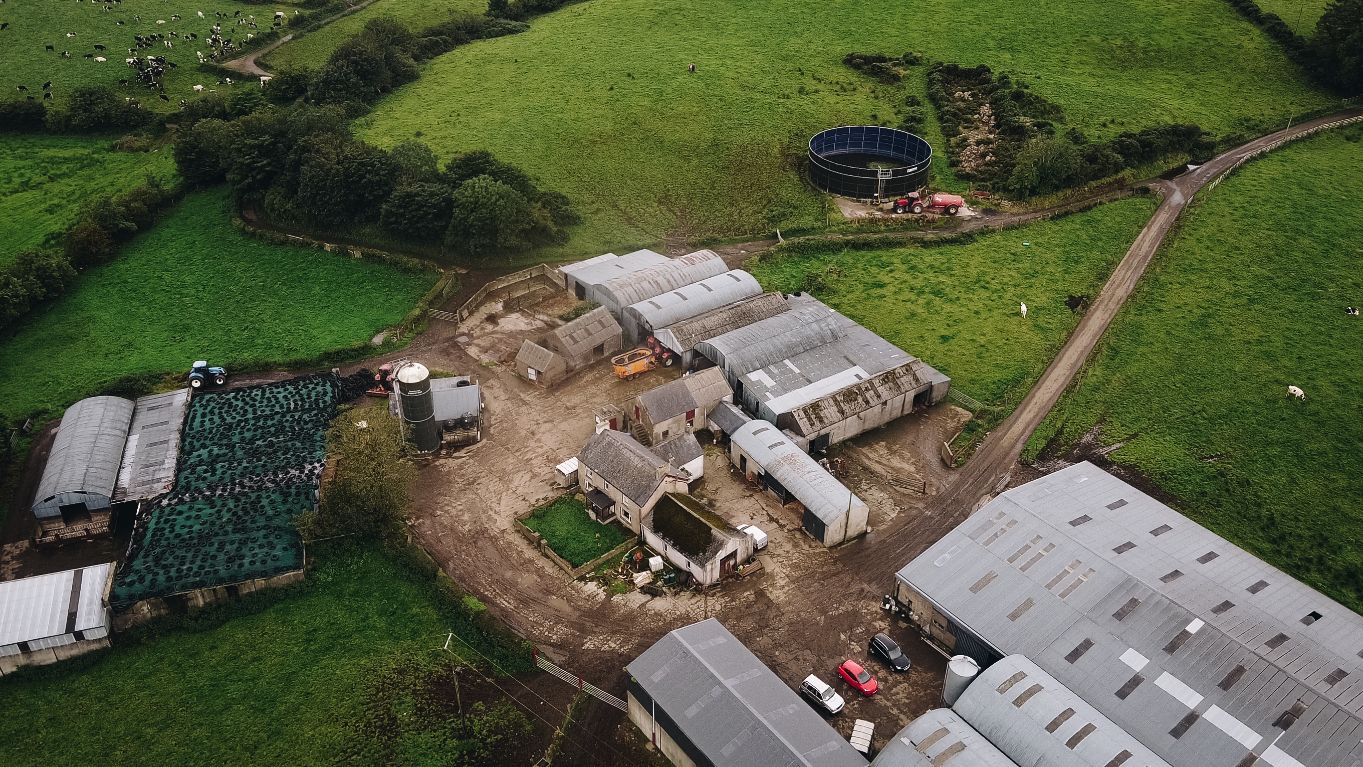 They operate an all-year-round calving system and maintain their milk output throughout the year.

“Saying that we do have more peak calving blocks in both the spring and autumn. This is an area we have looked at, driving efficiencies,” he explained.

“Having the year-round calving had been leading to reducing fertility benchmarks and longer calving intervals due to the size of the herd.”

“Still, we have turned this around over recent years and are slowly returning to optimum performance.”

“Personally – I have never actually worked with any other breed except for a few Jersey cows that my grandmother kept when I was young.”

“So maybe I am a bit biased or even inexperienced when it comes to other breeds, as I have just kept working with the breed we have always worked with.”

“But for me, there are few other contenders in the dairy market, which can compete with a good Holstein Frisian. I realise there have been problems with some of the high-type show animals. The associated lameness and longevity issues that have been documented.”

However, although they have competed at shows historically, they focus on a strong Holstein type, which is “financially productive and can compete long-term with some of the more commercial breeds”.

They calve through the year, but their active months are October through to May. He cited maintaining milk yields and benefiting from various bonus payments throughout the year as the main reasons for this.

They still use a blend of both AI and stock bull. His father bred several pedigree stock bulls to sell to customers, but recently, they have tended to retain any stock bulls.

“Partly my fault as I took the herd away from stock bulls for a period where we focused nearly completely on sexed semen AI.”

The routine did change depending on a cow’s pedigree standard, but generally, cows were given 3 rounds :1 – sexed semen Holstein, 2 – sexed or conventional Holstein, 3 – beef and generally Angus.

“We use semen from both Genus ABS and Semex. I like to be directly involved in the choice of sires for a number of our cows.”

“Furthermore, we have used sexed semen over the past year from the likes of Harper and Commend from Genus or Bloomfield and Ardor from Semex.”

“Although I understand the value of genomic testing and full AI programmes, we have a strong home-bred pedigree within our herd. We still want to retain some of these traits from our own breeding, so we still find a place for our stock bulls.” 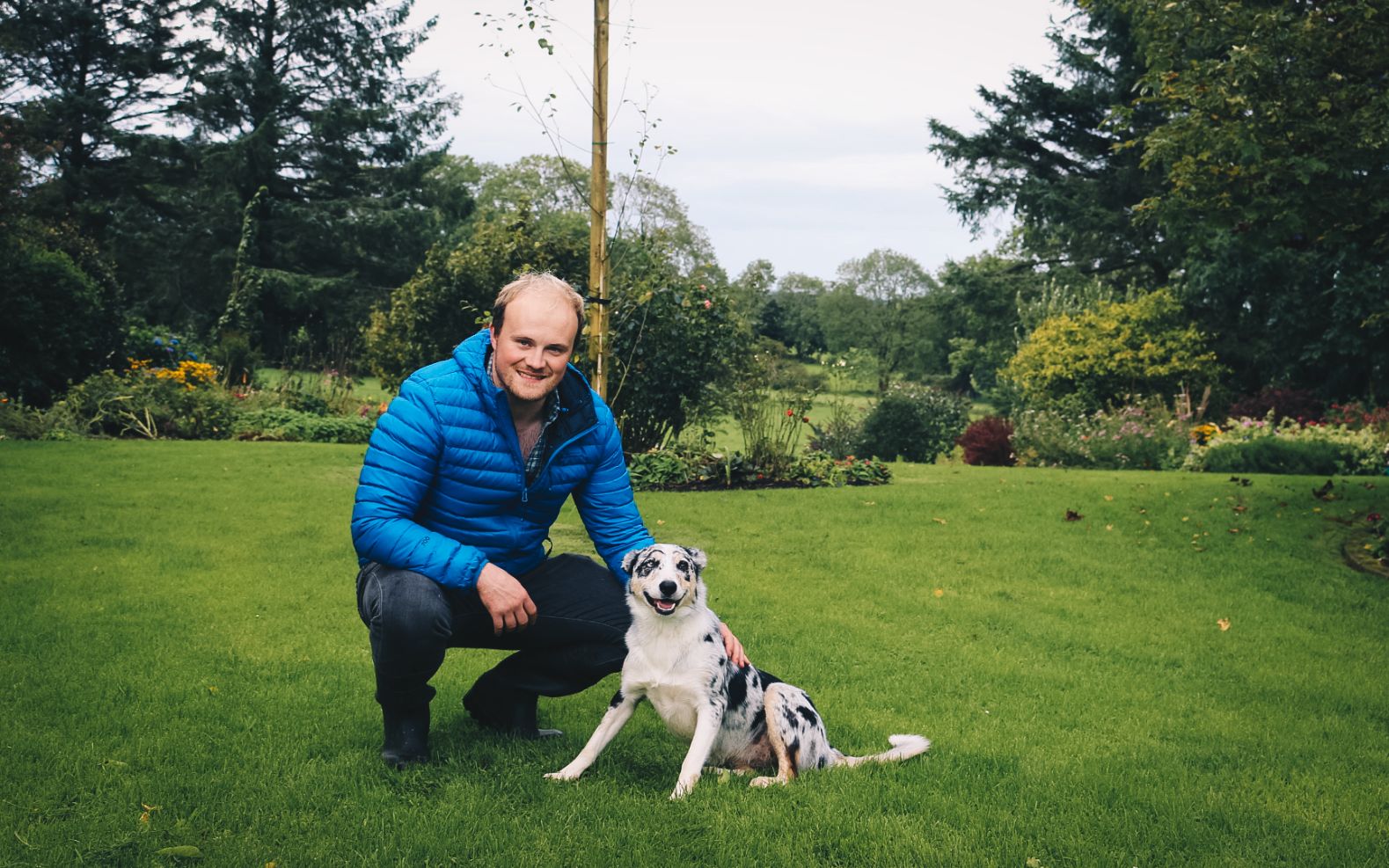 Ed strives to focus on yield, fertility, and locomotion when selecting breeding females. “Although, I will not sacrifice solids for a huge yield, and solids are something we need to strengthen on.”

“Fertility indexes are becoming more reliable within the AI companies. I have a strong focus on feet and leg scores with a good foot angle.”

The family sell all their Angus calves off-farm, along with the majority of the male Holsteins – except those they earmark to retain for breeding.

“We always keep nearly all our heifers for replacements each year, and classically we would have a number to sell as first calvers to customers. Although, we have endured a period of TB restrictions which has hampered sales over recent years.”

According to data from Lakeland Dairies, the herd, which has an average calving interval of 369 days, is currently averaging 27.86 litres per cow at 4.01% butterfat and 3.31% protein.

“No higher than 7kg of high protein dairy nut per day at peak lactation fed in the parlour on top of the base blend in the total mixed ration – and then fed to yield throughout the lactation. We do not feed as hard as some units.”

“We do still graze, although our grazing season is short in Coleraine, from mid-May – mid-September. Also, we still strip graze, and some of our paddocks were historically used to a lower number of cows in decades gone by, which does create problems, so we do have to be careful on our rotation and reseeding plans.”

“We milk through an old Alfa Laval jar parlour built in 1999 in a purpose-built unit my father put up.”

“It is quite old-school now but still does the job. It is a 10 point doubled-up system, and it would take us about 3 hours from start to finish. We milk twice a day,” he added.

“There seems to be new parlours or robots going in everywhere, and we have been looking around. However, we have no immediate plans to replace the system.”

“As always, we like to take our time, and we want to go and see everything from bailing systems to robot units,” added Ed, who stated his primary focus is on maximising fertility. 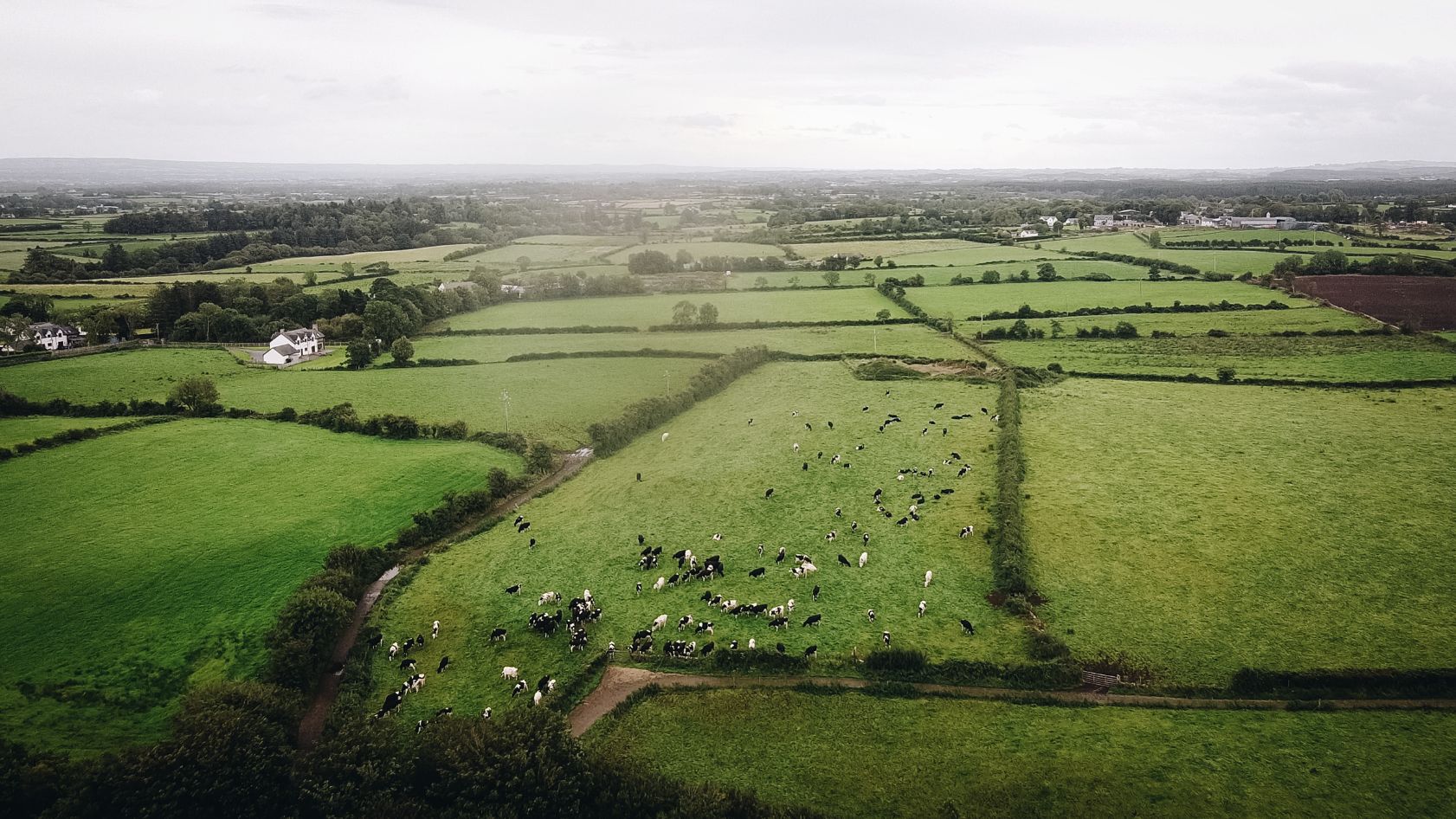 The main focus on the farm are two projects. Ed is in the process of completing a new storage shed, and next year, he hopes to erect a purpose-built calf shed capable of handling around 100 calves with all-in, all-out systems for small groups.

“However, they are other changes on the horizon. “The biggest adoption we will have is that we are investing in heat time detection.”

“This will be a change from the old tail painting techniques and help us drive into our fertility management. We also hope to install an automatic calf feeder in the new calf shed once it comes.”

“I want to pull our fertility percentages as tight as possible. Long-term, my eye would be on our milking facilities and potentially a return to the show ring.”

“You can never stand still in the dairy industry, so naturally, I would probably see a gradual expansion over the next 5-10 years.”

“I am not unhappy with the daily yield herd average with our current cost inputs and system. I would be wary of overspending in a pursuit of higher production averages.”

“Still, I do believe that we can increase our production figures – and ideally, reaching the 30-litre average daily yield mark would be a current target,” he added. 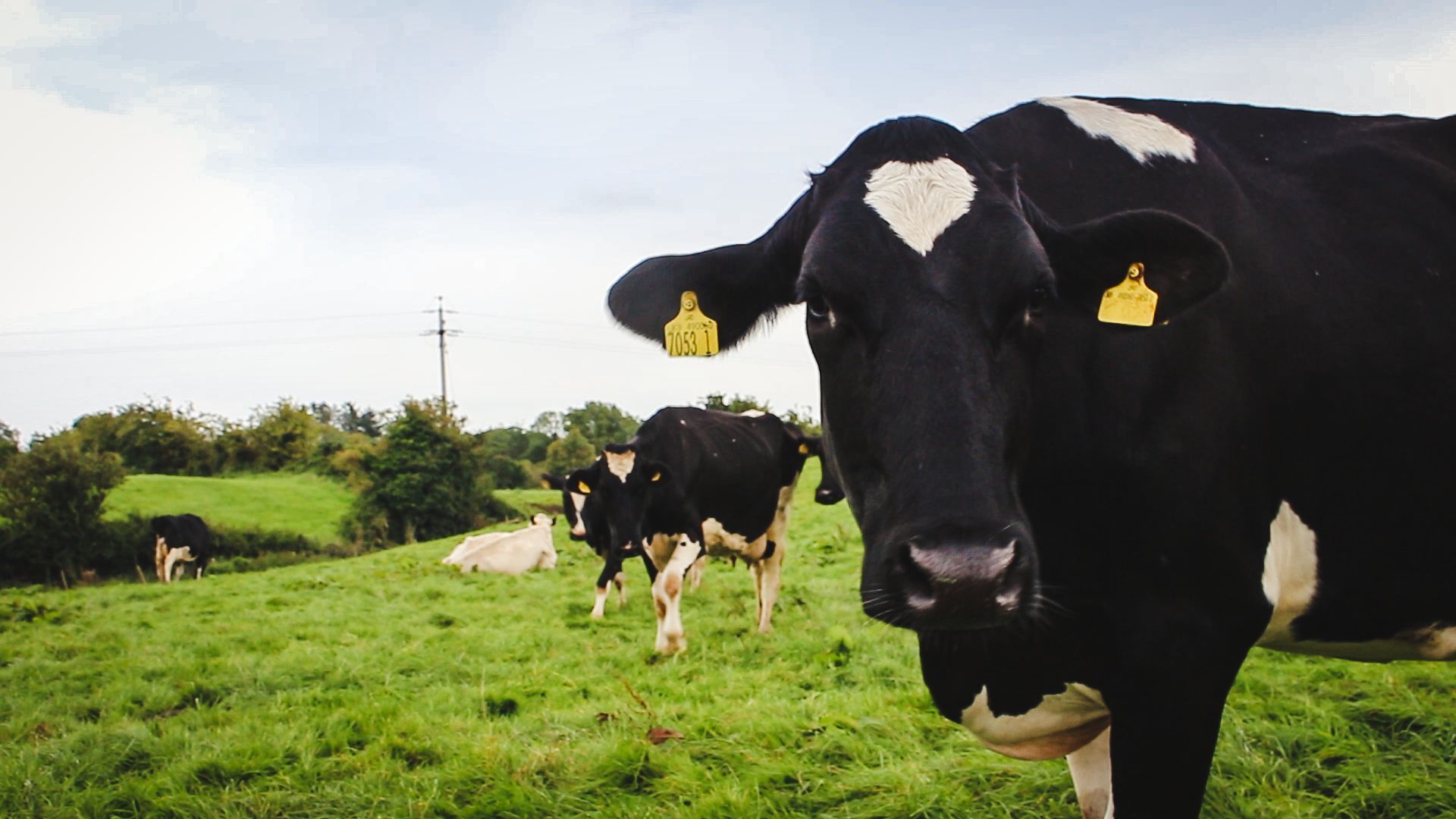 According to the dairy farmer, the continual intensity of the margins of the industry is challenging. “Particularly having worked in other industries which are seen as ‘cut-throat’ industries, they are nothing compared to the dairy sector.”

“I think to survive as a dairy farmer now, you have to be very astute in a business and agricultural sense; it is not easy to prepare for that.”

“I do not think dairy farming is all bright lights and shiny tractors that some outsiders looking in might think.”

He said this year, the good milk price has been well documented. However, he stressed, input costs have risen higher, some by 20-30%, which is not offset by the milk price increase. He believes this needs to be highlighted more.

“However, there will always be opportunities for someone, and I think consolidation of larger units will continue. The limited recognition of the true margins involved in dairy farming needs to be better understood by the general public.

Reflecting on his journey, Ed said:

“Dairy farming has been so much more to me than just the cows. Ever since I returned home, there have been numerous challenges from family succession issues, market collapses and technology changes. Still, I am glad I am here, and I would not change it for the world.”

“I was lucky enough to establish a company called TheVetService.com, a veterinary job and training platform within that industry that now has a host of veterinary practice clients globally, including countries like New Zealand, Australia, North America, Hong Kong, the UK and of course, locally.”

“We have laid out an office for the team involved in that business on the farm and, therefore, hopefully helping to consolidate the future of both our veterinary and dairy businesses,” he concluded.

- Advertisement -
Previous articleVIDEO: Is a proposed road planned to pass through your land?
Next article‘The tide is turning on factory-style farming in Ireland’