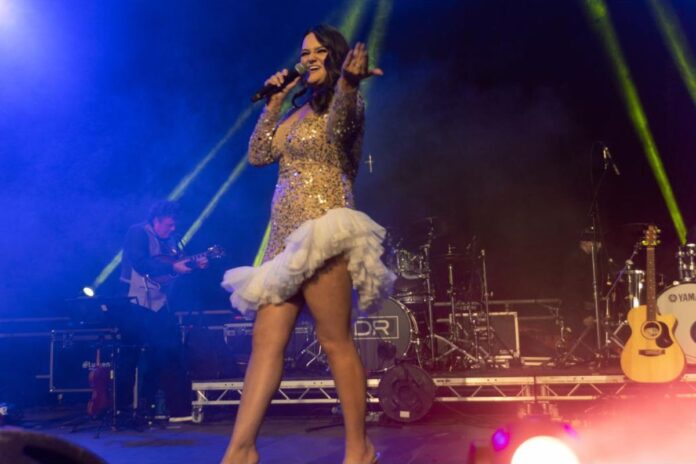 “I grew up in a household where country music was played most of the time. The radio was always either playing Big Tom, Kathy Durkin, or Philomena Begley.

My parents are both into country music, so it was what I was rated with – I did not know there were other styles of music until I went to primary school and was introduced to pop.

We took a trip, however, to Nashville when I was seven and that it where the interest was sparked.

We visited the Country Music Hall of Fame and the Ryman Auditorium, where I sang As I Go Down to The River to Pray on the stage, and at that moment, I knew I wanted to sing country as long as I lived.

I was in primary 3, and we were asked to write a story on what we wanted to be when we grew up, so I wrote about how I wanted to be a singer.

However, in primary 4, I discovered acting and then wanted to be an actress, so I was so torn about what to do and was so distraught at the ripe age of seven.

I can vividly remember talking to my friends and asking them what I should do regularly, as if my whole life depended on that one decision.

So, I got to primary 5, and my teacher then said I could try both, and so that is what I did.

My biggest inspirations are Loretta Lynn, Doris Day, Ronda Vincent – voice and style of music, Lisa McHugh for her work ethic and ambition and Derek Ryan – Song for his song-writing ability. 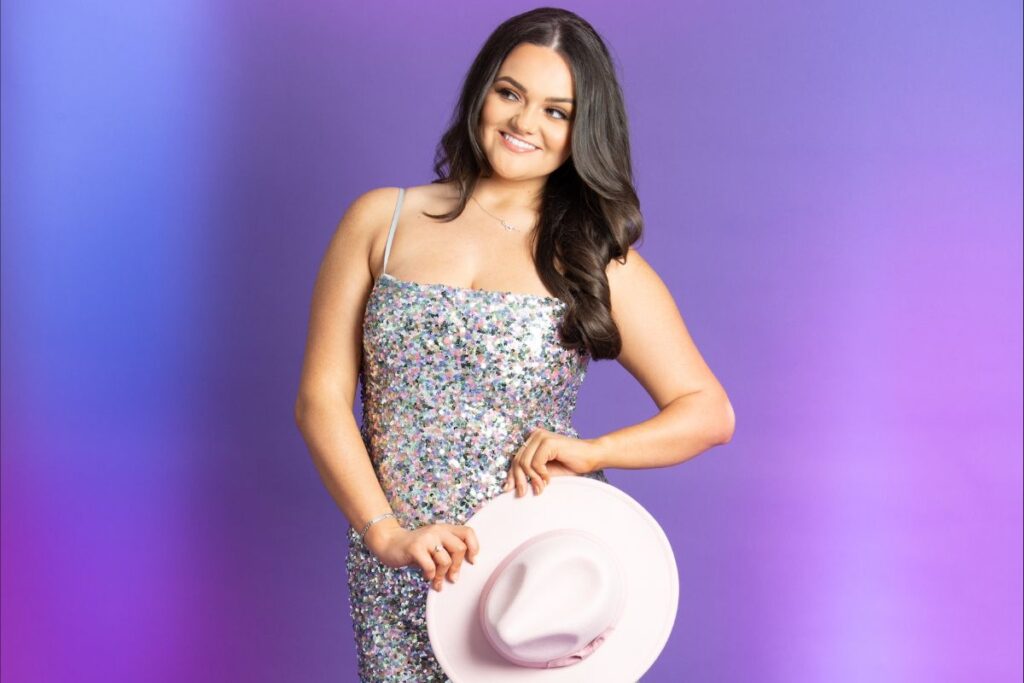 Both my parents are very musical. Mum is a great singer, and dad could lift his hand to any instrument, but all as hobbies and neither would sing nor play in public.

There is a great musical trait within the extended family circle.

I have cousins who are great singers/musicians and an uncle who would have played with the showbands in London, but no one is involved with the Irish country music scene.

Moreover, I also recorded a 12-track album in the late Gene Stewart’s recording studio. I was doing a competition called Tyrone’s Got Talent, which was held in Killesshill, Genes’ hometown.

I sang Independence Day by Martina McBride, and he went straight up to my parents and booked me in.

It was a lovely experience, and he was such a gentleman who genuinely wanted to see me do well, so I will always be forever grateful for that moment.

Fast forward to more recent years, and I produce cover-versions of all different types of music.

I would sing at weddings regularly, so I have such a versatile selection of songs to sing, such as country music, pop music, Disney songs, hymns etc.

I am a very versatile singer, so being able to sing more than one genre is great.

However, I do, in 2023, plan to cover a lot more country music, and we have a few things in the pipeline which I am very excited about.

I sing at weddings, and this is where I would record most of my content for my social media pages and would post regularly on TikTok and then share posts to Instagram/Facebook.

Tiktok, at the moment, is the best way for me to get my music out there, as the engagement is brilliant.

I am currently in the process of finishing my debut album which is due to be released in June of this year.

I just love watching people make music and admire their talent to be able to do so.

Also, I love hearing different types of voices within country music, especially males, as they have such a deep resonating sound which, to me, is pure, true country. 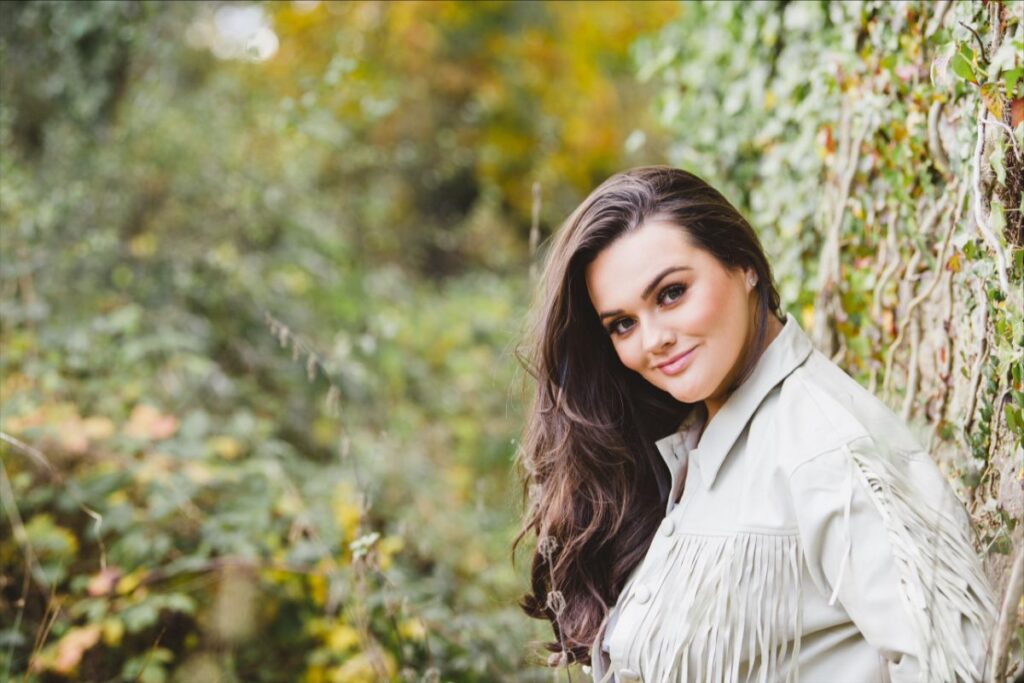 I have performed all over at different events and concerts. Previously, I was a part of the Irish Post Country Music Awards Broadcast on TG4 and have been involved in Sunday shows broadcast by RTÉ.

I have performed all over Ireland/ the UK with the touring musical Blood Upon the Rose.

This is a musical based on the events of the 1916 Easter Rising, and I play the role of Grace Gifford.

I have recently just performed at Jamboree in the Park alongside Derek Ryan, Mike Denver, and Johnny Brady.

At the moment, I am currently taking on bookings for guest spots and concerts.

I am performing at the Northern Ireland country music awards in the Tullyglass Hotel in Ballymena on February 7th, 2023, and the Hot Country Awards Night in April.

You can also catch me on Friday, June 30th, 2023, in the scenic inn Coleraine for a night dancing with my band.

I think the country music scene is a difficult scene to be involved in, regardless of age.

What I found most difficult throughout that time was juggling my passion for music but also my academic career and personal life.

I was struggling with what path to go down and, due to a number of reasons, knew that I was not ready to pursue music.

Over the past six years, I have matured greatly, have gained more life experience, and have had time to brainstorm which has allowed me to develop my artistry and become more secure as a person, never mind as an artist.

I just need to have a thick skin and get myself into a position where I will be given the chance.

The most difficult challenge for me, honestly, is to not be so hard on myself. Overall, I have a very strong work ethic and am always driven for things to be perfect.

Previously, I was not fully happy with how a gig went or how I sounded, and simply by what I was doing; I would have lost a lot of motivation and then given up.

Moreover, I believe this was due to my lack of life experience and not being in the working world where things can go wrong but are out of your control.

This scene is very high maintenance, but I am glad that I have adapted a new approach which should save some difficulties.

As well as singing, I am a family intervention worker with the children’s disability team in the Southern Trust.

I previously worked in an SEN school, which led me to my current position. My role is to help families who have children with additional needs by providing them with the appropriate support and correct services.

As well as this, I am also a singing teacher, teaching in secondary schools and from home. I also am a musical director for a youth theatre school called ‘Stagestars’ in Armagh.

My goals are very simple as I do not like to strive for too much to then be disappointed.

My motto in life is ‘take each day as it comes as you never know what is around the corner’.

Short term, the plan is to release my album and have an album launch, to release more cover versions and to be adventurous with my song selections.

Long-term, my goal is for singing/performing to be my full-time job and to be known throughout Ireland for my voice.

As a young country music artist, I am enjoying the journey of ups and downs.

It will certainly not be an easy ride, but I am excited to see where things go, and most importantly, I look forward to recording new music and sharing it with you all.

We have a lot of ideas and plans in motion already for the future, and I look forward to where the next few years will take me.

As always, I am forever grateful for all the continued support.”

All imagery provided by interviewee