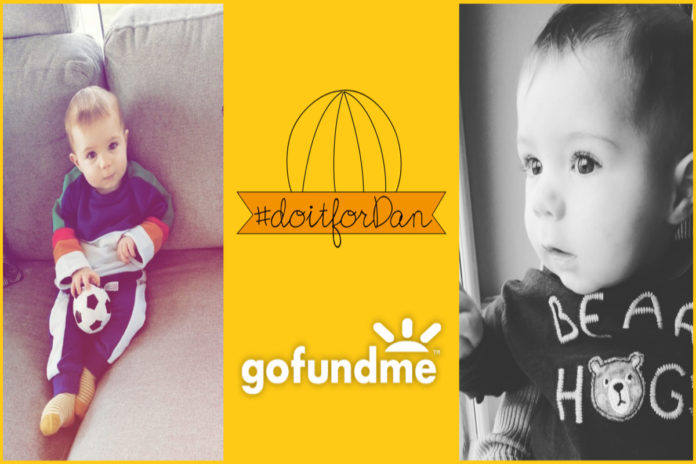 The ‘Do it for Dan’ campaign was launched by parents and Laois footballers Niall and Aisling Donoher in order to raise funds for a new treatment for their son, Dan, who was diagnosed in 2019 with Spinal Muscular Atrophy (SMA) Type 1 and Scoliosis.

The goal for the fundraiser to reach €2 million is getting nearer with every day. At the time of writing, the Gofundme page has amassed €1.18million in donations and is constantly rising.

Do it for Dan

Dan Donoher was born on the 28th of March, 2019, to loving parents Niall and Aisling. Unfortunately, Dan was diagnosed on the 6th December with a rare genetic neuromuscular disease called Spinal Muscular Atrophy (SMA) Type 1 and Scoliosis, with an average life expectancy of 18-24 months.

SMA is a progressive loss of motor neurons, which are the nerve cells that control muscle movement. The muscle eventually breaks down and wastes away. At the time of his diagnosis, Dan had already lost his ability to lift his legs, control movement in his neck and lie on his stomach.

His parents say that because Dan has the most severe type of SMA, the muscles used for swallowing, speaking and breathing are damaged and he requires the support of a ventilator.

On the 7th January 2020, he began a new medication called Spinraza. This is the only available treatment in Ireland for this particular case. This treatment does not have the ability to cure SMA type 1, but it can delay or reduce the symptoms.

A ground-breaking treatment called Zolgensma was discovered, which is currently only available in the USA and costs 2.1 million dollars for a once-off infusion. Studies have shown that Zolgensma can substantially improve quality of life and survival of this horrific disease.

Zolgensma is gene therapy and can only be given to children under the age of two who meet the necessary health requirements. The treatment delivers a functional copy of the gene that Dan is missing (SMN1). He meets the requirements for this treatment and now the clock is ticking to raise enough funds to get this treatment.

On their Gofundme page, Aisling said that the quality of life that this treatment could give their son would be life-changing. “With this treatment, we as parents could hope that one day our son Dan could help his daddy on the farm, play fetch with his dog Bobby, join his friends outside and simply pick up that yellow ball.”

The cause has gained national interest, with many mainstream celebrities getting involved with fundraising events such as Davy Fitzgerald, Catherine Thomas, Johnny McMahon, Aidan O’Shea as well as many others.

Ireland and Everton star Seamus Coleman also joined in supporting the cause, making a €15,000 donation to the Gofundme page.

A new social media trend has also been launched to support the cause, where some is nominated to run 5km, donate €5 and nominate 5 others to do the same.

If you wish to donate to the ‘Do it for Dan’ campaign, click here.