That's FarmingThat\'s Farming Irelands Largest Farming News, Properties and Classifieds Network
HomeDairy‘We were busier when we had 54 beef cattle and sheep than... 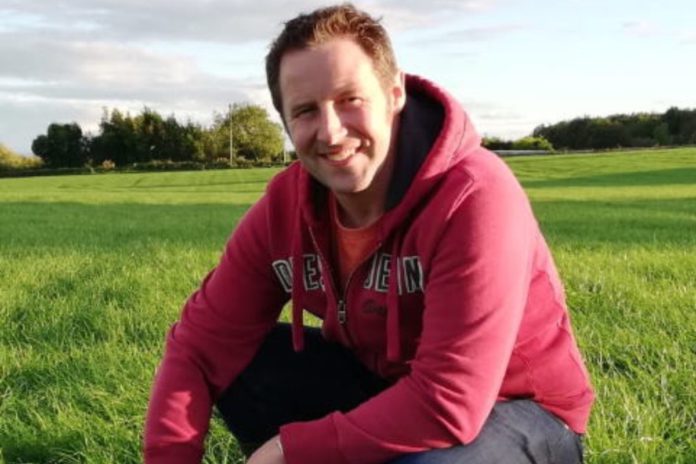 In this week’s dairy segment, That’s Farming, speaks to Laois farmer, Bruce Thompson, from Camcloone Dairy Limited. He discusses recovering from a TB outbreak, calving heifers at 24-months-old, breeding a smaller cow with a target of 550kgs of milk solids and a passion for dung beetles.

Losing 48 cows out of 52 to a TB outbreak 20 years ago almost caused dairy farmer, Ian Thompson, to“throw in the towel”.

His son, Bruce Thompson, left automobile engineering in Cork IT to take the farm’s reins when his father discussed this possibility. His father farmed 52 dairy cows, 40 ewes, and 54 beef cattle.

“I came home, took one look at the sheep, and I said it is either them or me, so the sheep went. I had no grá for them, I suppose,” Bruce Thompson, who is married to Laura, told That’s Farming.

“There was not much talk or commitment for the abolition of milk quotas, and the same drive or dynamic was not in the dairy industry at the time,” the Laois native said.

In 2012, Bruce took over Camcloone Dairy Limited, in its entirety, employing his father and farm manager, Nick Berry. The farm spans 380-acres in size with leased and owned land.

The enterprise comprises a 300-cow herd and 160 youngstock, mainly Jersey-crosses with some crossed to British Friesian and others 100% Holstein Friesian.

“We did not know milk quotas were being abolished until around 2009/2010, and that spurred us on to get moving.”

“We had a great interest in dairy farming, and it was not all about money. It was the most reliable source of income of the farming we were at.”

“We concentrated on it. Land became available, and we converted our land from beef to dairying, which left us with more opportunities.”

Bruce’s father secured milk through Bruce being a new dairy entrant and the bidding system during the closing years of milk quotas. These measures brought cow numbers up to 120.

Almost 100% of the older cows go back to a Holstein Friesian crossed to British Friesian, which, Ian, started with as a former IHFA member.

The family kept heifers as replacements until they increased numbers to 260 cows. Then, they bought 40 heifers this year, bringing numbers to 300 cows.

“The opportunity arose. I am finding I have less work to do with more animals as you are more inclined to delegate jobs out to other workers.”

“But, there was an opportunity there to make a better way of life out of it, so we took it.”

“We were busier when we had 54 beef cattle and sheep than we are now with our 300 dairy cows; the days were much longer.”

Their diet comprises 600-700kgs of concentrates per annum, along with grass or grass silage.

This enticed him to find the active bull list online with no breed in mind, but a low volume of milk, a high level of solids, and a smaller cow.

“If a smaller cow can produce the same amount of milk solids as a big cow, then you are quids in.”

“For example, if an animal is 150kg less and putting the same amount of milk in the tank, that is 150kg less that cow has to maintain.”

“If you put that cross a herd of 300 cows that is 45T every day that has to be fed. It is extra grass, meal, and drinking water, harder on hooves and less efficient.”

“It is putting more methane gases into the environment, so you are using more resources. It is the equivalent of feeding an extra 80 cows on the farm.”

“We are getting almost 50/c/L for milk at present. You will not get that when it is watery milk, even though you might have the same milk solids.”

“You are getting more money when it is at higher constituent percentages. It is sugary water, and it takes energy to put that milk into the tank. It must be cooled, transported, and all those processes.” 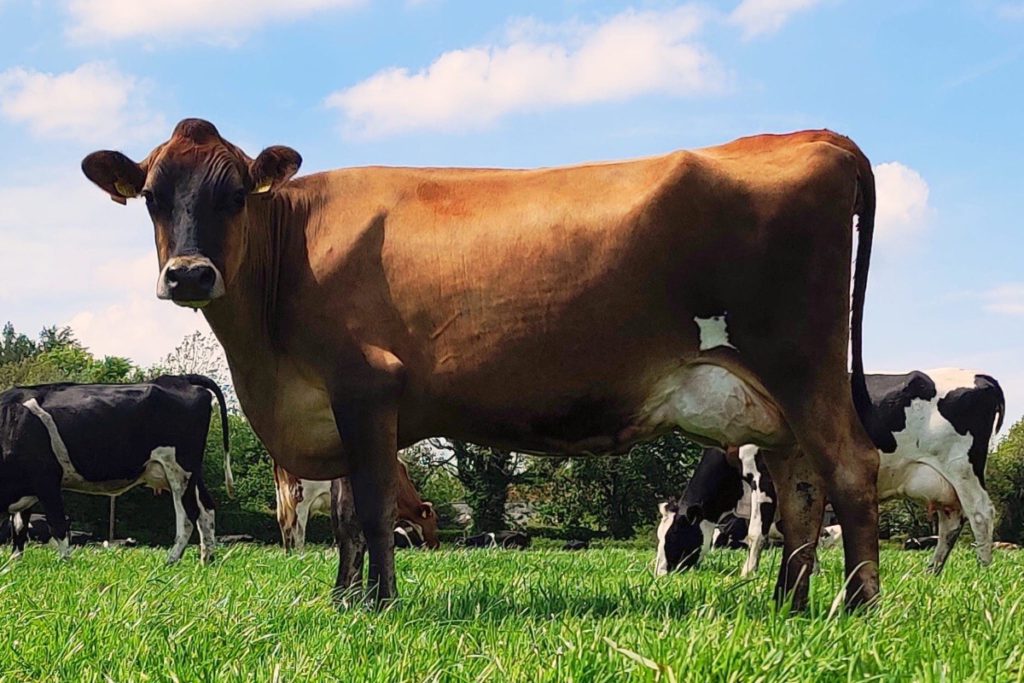 “One of the most important jobs is managing grass, getting quality of grass in front of you the whole time and keeping it at the right stage. We measure once a week, depending on grass growth.”

They use 100% AI on the dairy cows, and the farm advocates a CIDR programme for heifers. Bruce places CIDRs into 60-80 heifers ten days before AI and, on day seven, removes them. All heifers are AI’d the one day, with two bulls introduced.

He observes heifers for heat detection on week three; they are then AI’d and removed from the bulls for a few days.

“Calving mainly takes place in February over nine weeks with very little assistance. So, 88% of calving takes place in six weeks.” His calving interval is 368 days.

“We look to maximise peak grass growth (spring-calving, grass-based system) in May to coincide with cows’ peak milk yield.”

“So, milk producing more grass is what we are looking at and getting as much grass in their diet while they are lactating.”

Bruce sells 60 heifers on-farm and retains 65-70 heifers to calve down at two-years-old.

“They have to calve at the same time of the year as our cows. So, if they do not calve then, you are going to have to add another 12 months to it, which is expensive; it is inefficient.”

The farm is now in its eight-year selling bull calves off-farm at bucket-fed stage.

“I am very happy selling on-farm; it has been the best way of managing the herd. Furthermore, I do not like bringing animals to the mart mixing animals with other animals and bringing them home if I am not happy with the price; it is a buyer hazard. I was happy to get away from that.”

“I am happy enough with the prices. If people are interested, they will come to look at them and try to do a deal.”

“You build up a relationship with a purchaser through off-farm sales, which is the other thing.”

Other farm infrastructures include a 150-cow cubicle shed, a 150-cubicle cow shed outdoors, and a selection of straw bedded sheds for calving and housing calves.

As part of his expansion journey, Bruce, an O’Moore Teagasc discussion group member, noted that continuous fencing and implementing roadways/pipe systems are paramount.

The Laois dairy farmer is very vocal on why dung beetles need to be included in Irish farming to manage parasites.

“I feel they are both a gateway drug for ecology and a good indicator of species to show the impact that a particular farm is having on its environment.”

“They also return positives to the farm as biological control methods for animal pests and contribute positively to the soil.” 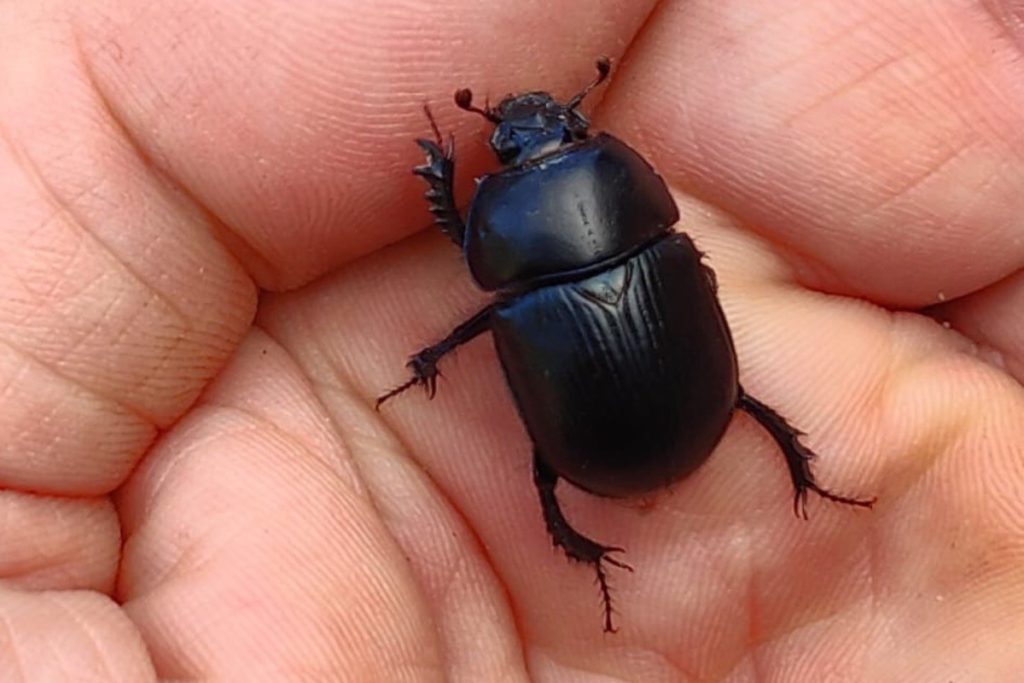 Bruce shared his view on the future of dairy farming.

“I believe we are the best country in the world to produce milk: the family farm, a grass-based production system, integration with the community, and the genuine care farmers have for their animals.”

“We really have an opportunity to show the rest of the world how it is done. We are not perfect, but we have a very integrated and motivated industry.”

“Instilling confidence in Irish farmers to adapt to new environmental measures will prevent us offshoring problems. The world’s population is increasing and is almost more aware of food sources.”

Bruce intends to delegate more streamlined jobs, fill a labour gap in the company and long-term, look at adding value to his time.

He aims to achieve production figures with a cow giving 110% of its weight in milk solids (550kg) from 600kg of concentrates.

“I like the diversity of the job and people involved, the flexibility of the work, and the way you can achieve results with hard work.”

“My plans for further expansion have been paused with the plant on hold with Glanbia,” the Laois dairy farmer added.

“The expansion now means employing a less sustainable milk production system, which is ironic really when you consider the reason for the plant being held up.”

“My biggest challenge has been staying focused on the most important jobs on my farm. Spending time working on my business is far more important than working in my company.”

“I find stepping away from tasks and letting someone else at them challenging. So, a major part of the expansion phase has been delegating,” Bruce, 2020 Nuffield Scholar, concluded.