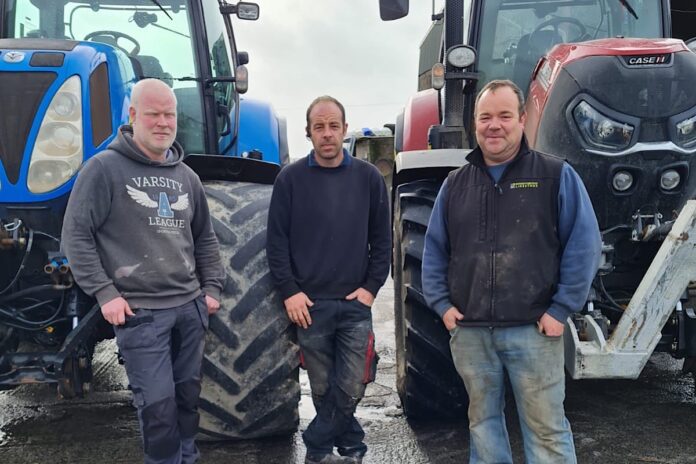 As part of this week’s Ag Contractor of the Week segment, That’s Farming profiles Tom McGrath of McGrath Agri. He discusses running his father’s business with his brother, selling machinery, making up to 9,000 silage bales and challenges.

One of the first agricultural contractors to offer pit silage services in 1965 near Kilkenny was the late Tom McGrath, who covered from the Port of New Ross into Tipperary.

The firm has served clients for over 50 years, building up its customer base through word of mouth, serving a 25-mile radius with fertiliser spreading from its base.

Over 21 years ago, his son, Thomas, attended Kildalton Agricultural College to complete his Green Cert, which he followed with a course in crops and machinery management course.

Thomas and his brothers, Packie and Dermot, operate the company full-time with their mother, Margaret, and wives, who are responsible for bookkeeping and around nine part-time operators during peak times.

“We always had a keen interest in farming and machinery and knew no different than machinery as that is all we had,” his son, Thomas, told That’s Farming.

“We do not have land, with half an acre in one yard with the other yard two acres.”

Besides, they run a shop/machinery sales yard, which they established six years ago and provide a parts service, undertake small maintenance jobs, and sell machinery.

Through dealing with Timmy O’Brien of Egmont Agri, the main importer of Samasz machinery, they became agents for Samasz and later Agrex, Metalfac, and Farmhand equipment, e.g. Quiche.

The brothers will further invest in their umbilical system slurry spreading service.

This service is a “major” part of the business, running for four years, spreading around 5.5 million gallons of slurry annually, and is the application method of choice for 95% of their clients.

They spread artifical fertiliser on up to 16,000-acres of land annually (including through merchants) and 3,000 tonnes of lime and produce in the region of 9,000 silage bales annually, which can hit as high as 12,000 – depending on the year.

“Fertiliser spreading was undoubtedly reduced this year because of prices, but, thankfully, we did not get hit as bad because we charge by the acre.”

“It gave us an edge because we can get back to a lower spreading rate with the Agrirex fertiliser spreader. So, this year, we spread a lot of fertiliser, half-a-bag to the acre rather than a bag to the acre.”

“In 2013, I ran three bulk fertiliser spreaders, went back to bulk spreaders, and bought a mounted spreader. In my opinion, it gave fertiliser a new lease of life.”

“We questioned it at the time, but because labour is so scarce, it is a big thing that has gone from strength to strength.”

Other items include a Krone tedder, a Samasz basket rake, a Claas Liner rake, a Bredal lime spreader, and an Agritech 4t fertiliser spreader (with section control, automatic shut off and additional features).

The business also utilises Keenan orbital dung spreader, a Slurrykat trailed reeler (with a trailing shoe) on the umbilical system, a 2,000 m piping, one 2,500-gallon slurry tanker and an Abbey rapid exit agitator.

The company will change their slurry tank and trailing shoe for its umbilical system and aims to keep forage harvesters “fresh”.

The brothers intend to hand the firm’s reins to their children, who have a “big” interest in machinery.

He believes that agricultural contracting is a “viable” business and is a line of work he “was never sorry for entering”.

“From an educational point of view, it is a major issue – machinery drivers are frowned upon, saying you cannot go driving machinery because you have to get yourself a trade.”

“Honestly, it is having a major impact on us because even if younger people want to do machinery driving, they are encouraged from an education point of view not to go driving tractors because you can do something better than that for yourself,” the agricultural contractor concluded.

- Advertisement -
Previous article
Castlerea: Suckler pairs to €2,460 and dry cows to €2,000 as trade ‘holds well’
Next article
Things people do not tell you about dating a vet