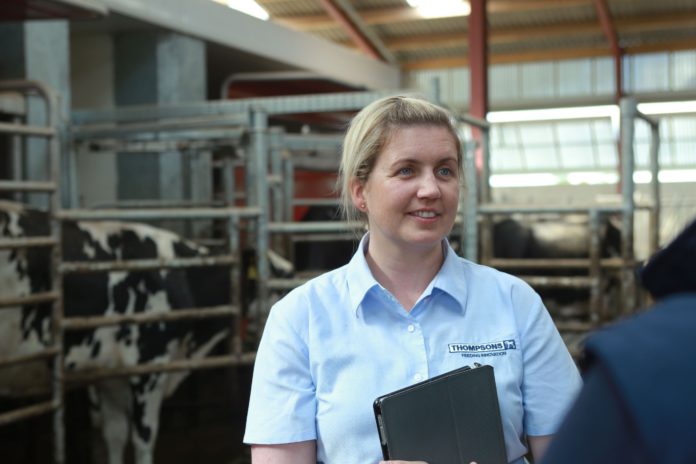 ‘When I started work, there were very few women certainly within the nutritional advising side’

Three months after Mary-Jane Robinson graduated from Queen’s University Belfast with a BSc (Hons) in Animal Science, she embarked on what became a progressive career journey.

The 38-year-old, who hails from Donaghadee County Down but now lives in Broughshane, County Antrim with her fiancé, joined John Thompson & Sons Limited in September 2004, initially as a trainee formulator before becoming a formulator.

In the latter, she was responsible for overseeing both monogastric and ruminant formulations as part of the nutrition team within the mill at Belfast.

John Thompsons & Sons Limited, situated in Belfast, is the largest multi-species feed mill in Europe. Starting initially as a family-run operation in the 1870s, the business continued to grow with feed for monogastric, and ruminants supplied to both north and south of Ireland.

She then moved to specialise in ruminant formulations in approximately 2006 before moving into its technical farm team in 2007, spending her time at farm level. 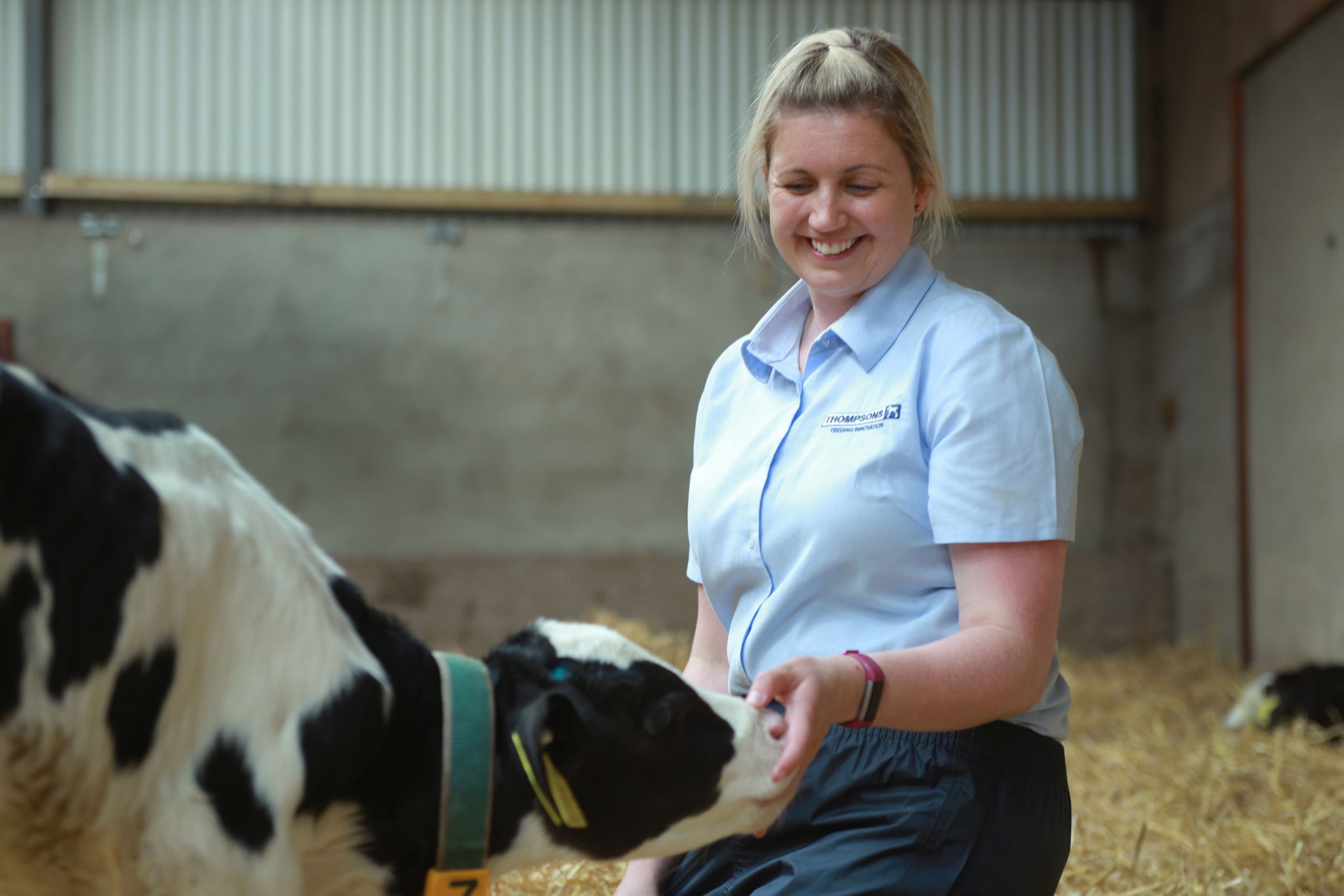 Within her current role as a ruminant nutritionist, she is responsible for supporting customers and the sales team as part of the wider technical team. Also, she ensures the nutritional requirements of the herds are met, and forages are balanced.

“I do not have a typical day as such. I plan the diary in advance, so I know what area I will be in, but in that could be anywhere within Northern Ireland.”

“Some days, I cover farm calls myself; other days, I meet reps from our sales team and do dual calls at farm level. Some days, I will meet vets or breeding advisors if specific issues at farm level arise to ensure the farmer is getting as much support as necessary to maximise both animal performance and cow welfare.”

She supports a range of herds and systems from lower-yielding grazing herds to more intensive high-yielding herds on robots, for example.

“Normally, either side of the day, the computer will be switched on so that diets can be run and other data relating to the farm such as milk recording data can be analysed.”

“I enjoy dealing with customers and seeing herds make changes for the better in terms of herd performance and improving welfare, but also the many long-term friendships that I build with customers.”

“It is challenging seeing farmers work long hours in an isolated environment with no control over the weather, no control on input costs such as feed and fertiliser, no control of milk price paid – financially; this can take a toll on farmers and prevent investment.” 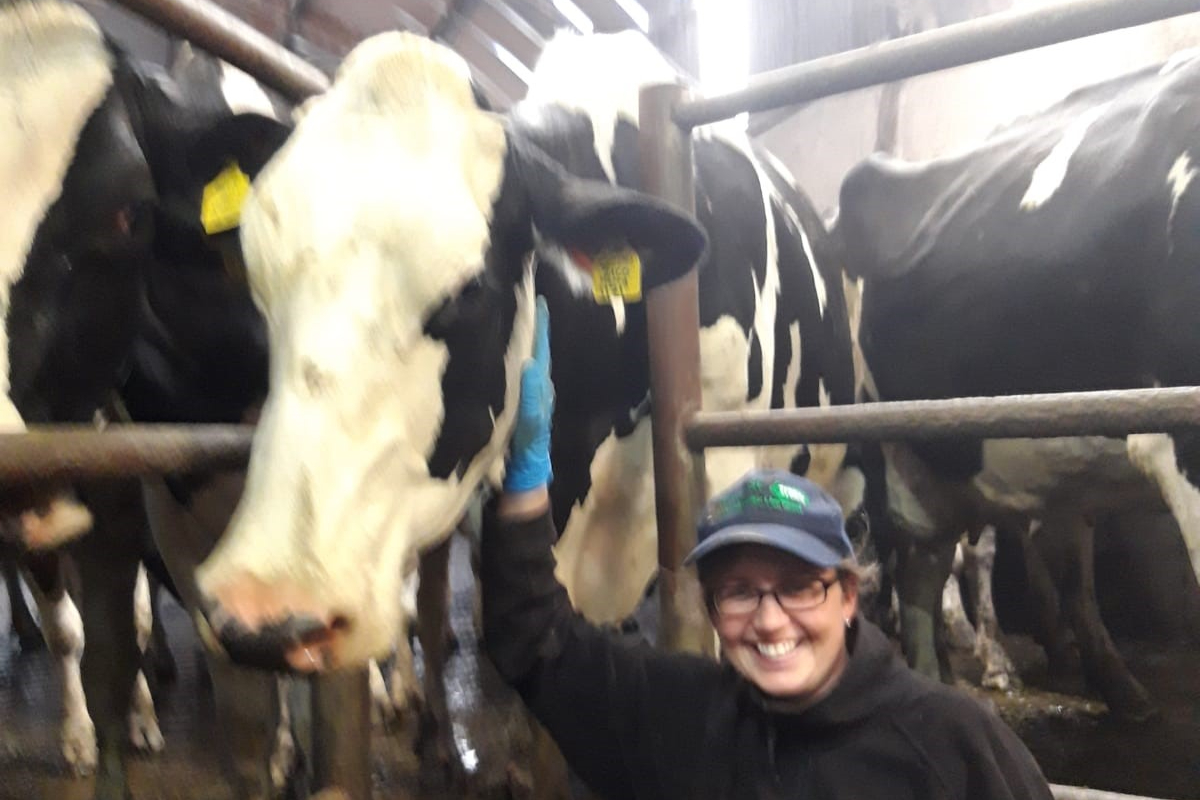 “Lockdown one saw me working predominately in my office at home, which allowed some time for catch up / research reading and some changes to how we communicated with farmers with some videos recorded at home for social media.”

“But beyond that, life returned to normal – feeding cows from behind a computer screen gives no reflection on the issues at farm level, and with cows, at grass or in a shed, the risk to myself or the farmer was minimised following various precautions.”

Now she spends her time on the road, attending the office rarely for meetings. Instead, Microsoft Teams has been the platform for engagement with the technical team and marketing department during the pandemic.

“With modern technology, the car can be the office some days,” added the John Thompson & Sons employee.

“Some of my highlights include being CowsSignals Master trained, travelling to the USA on a couple of occasions for training, which not only allowed me to meet other people but broaden my knowledge and see some top farms in America.”

“Farming has always been part of life with both sets of grandparents farming. My dad’s parents historically were dairy farming then moved to beef farming when they ‘retired’ and my mum’s parents were suckler farmers.”

“My parents initially started beef farming part-time, and now my dad is retired from the civil service; he is farming full-time now.”

“Farming was always going to feature somewhere, but if I were not in the agri sector, I would be working with animals in some capacity, such as working with horses ( I own two horses).” 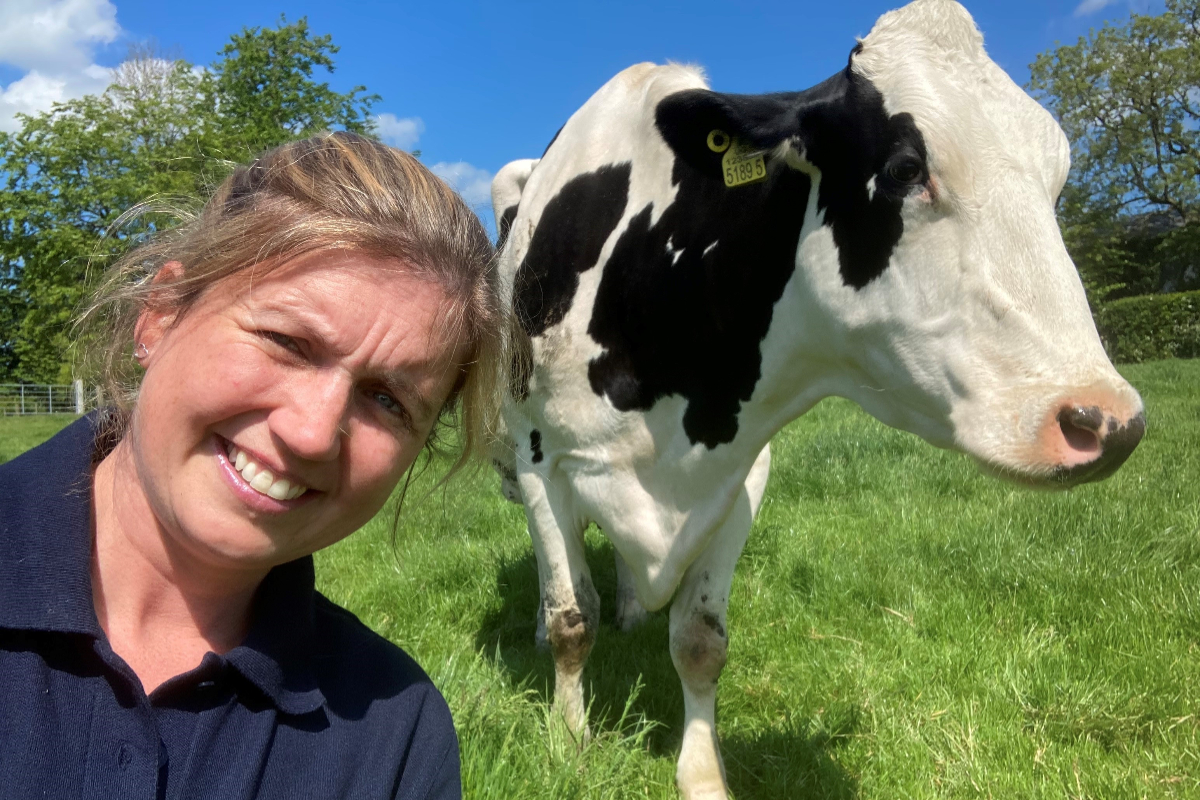 Now, she assists on her fiancé’s farm, Ian Maybin, which he runs with his parents, Dessie, and Sophia, with the help of part-time staff.

Cows are housed and milked twice daily using a 20/40 swing-over parlour with ADF. All replacements are home-bred with surplus sold from the farm. They utilise sexed semen mainly from proven sires, while lower-end females are bred to beef sires.

“My responsibilities will vary depending on my full-time job schedule. However, when I am at home, I will help with milkings, feed calves, essentially anything that needs to be completed.”

“Extra hands are always needed for TB testing, which is on this week’s list. However, at times of the year, there will be multiple silos to help cover. In addition, there will be times for vaccination, worming, fly treatment. The list is endless when it comes to farming,” she added. 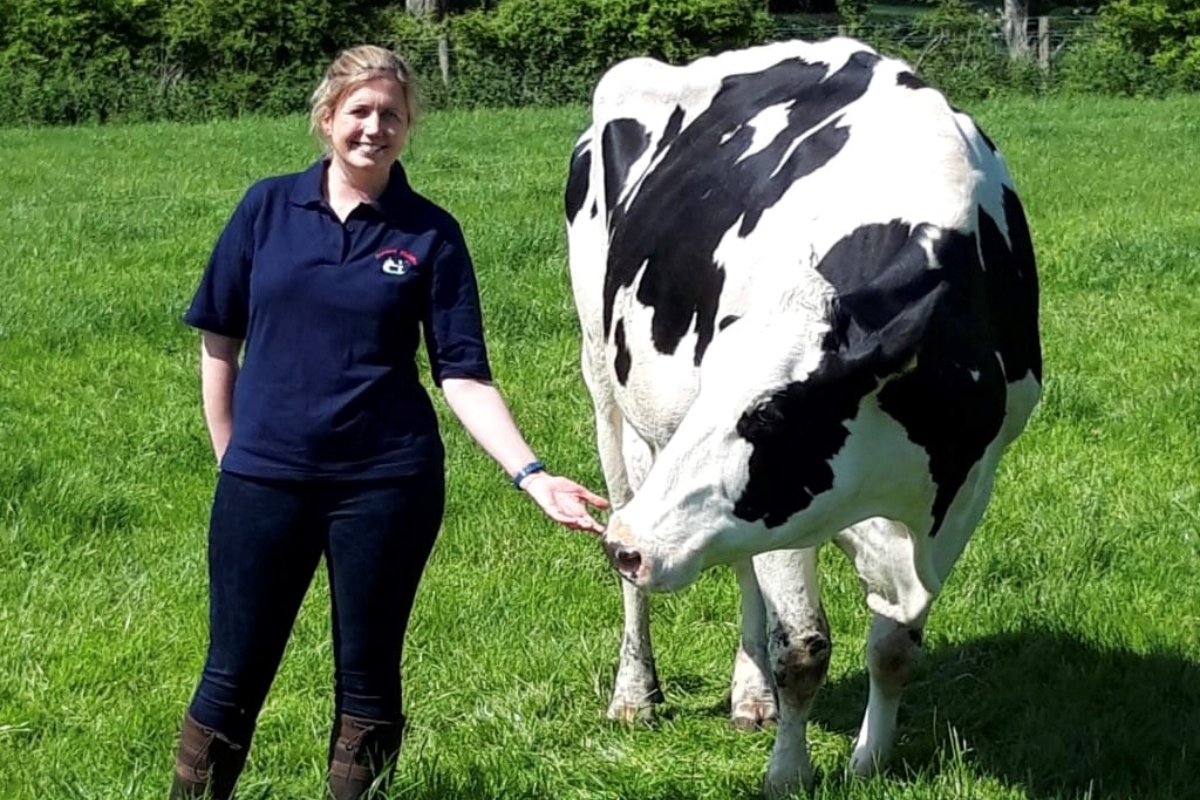 According to Miss Robinson, in general, the attitude towards women in agriculture has changed – especially in recent years.

“Initially, when I started work, there were very few women certainly within the nutritional advising side, now not only are there more women doing the job I do, but we also see more women in other areas such as veterinary and direct at farm level. Within John Thompsons, we have several females within our technical team.”

“I think it is fair to say as a woman you have to work harder to gain the recognition and respect for the job you do, but hard work and determination can prove some wrong!”

“Concerning farming physically, there will always be certain aspects we may struggle with. However, modern technology has made life a lot easier with less manual work.”

“For me, farming/the agricultural sector is a lifestyle choice, not a job per se. It is not a typical 9-5, so the reality those that enter the sector should be enthusiastic/passionate about the job and be willing to work hard.”

“But I think we are seeing more women enter agriculture as social media can be very influencing. So many women are now being inspired, and with high profile women documenting daily aspects of farming life, many women are now feeling empowered to enter a sector that, perhaps, they initially maybe only dreamed off.” 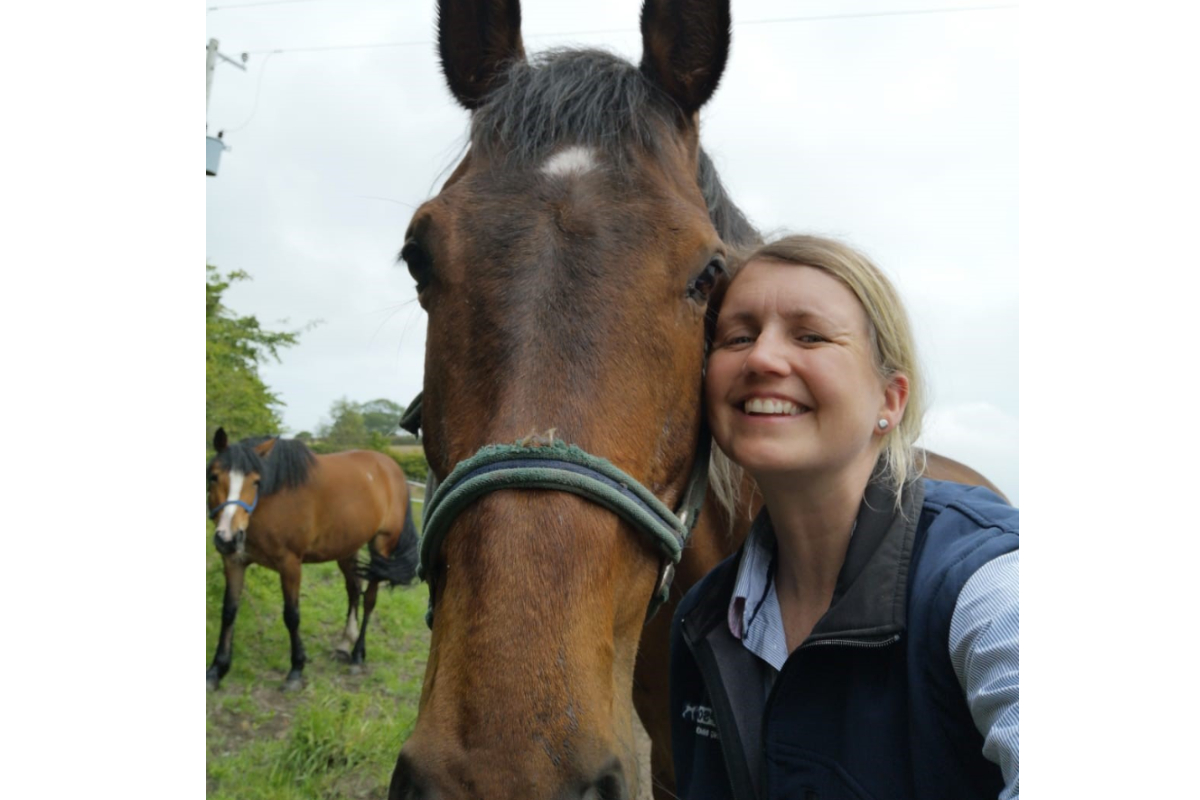 “For me, my journey to date in agriculture has been both challenging at times but also rewarding. Hard work and determination are necessary attributes within the agricultural sector.”

“My life revolves around cows primarily but I like spending time with my horses and dogs.”

“For me professionally, I do not foresee any changes to the job I do currently. However, I will continue to undergo whatever training opportunities arise to broaden my knowledge,” she concluded.