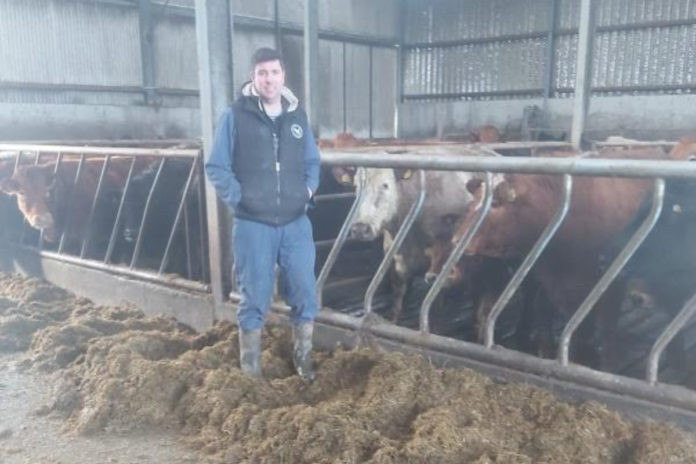 John Barry is a suckler farmer from Newtown, Nenagh, Co. Tipperary. He farms 90 suckler cows on 100-acres and has a 50:50 calving split.

He went to secondary school in St. Flannan’s, Co. Clare and completed his green cert in Gurteen Agricultural College.

John took over the farm from his father almost 5 years ago and has been farming full-time ever since. He breeds Charolais and Belgian Blue cattle for both the export and home market.

Autumn-born bulls are kept mainly for the home market. “I try to sell the Belgian Blues at home but this year I got a price and I wasn’t really happy with it.”

“So, I went to Tullamore with some of them and I won the show there. With the sale and the prize money on top of it, it was good,” he told That’s Farming.

Spring-born bulls and heifers are generally sold as stores at 18-20 months, mainly in Roscrea Mart. Bull weanlings are sold at 450-500kg, while store bullocks and heifers climb to approximately 540-600kg at 18 months.

“I was fattening them, but it was a waste of time. I’m getting more money for stores off grass than I would be pumping meal into them. I’m gone grass-based and keeping down on the cost as much as possible.”

The 50:50 split between autumn and winter calving has helped the farm in terms of labour and finance. The young farmer explained that labour is hard to come by in his part of the world. In terms of the finances behind it, John says: “With selling cattle, for cashflow, it’s very good.”

John has been trying a few different breeds this year in his breeding programme. He explains; “Any of the Limousin cows would get either Charolais or Belgian Blue. For my heifers, I’m using Limousin. I used a few Aubracs and I’m happy enough with them too and, at the moment, I’ve heifers calving to Parthenaise, which have turned out very good as well.”

The herd is at 90 cows currently and, for the shed space he has, John says he is happy with his current herd size. “We’re putting up a new shed at the minute, so I’ll see. I have the land to maybe go to 100 but with the way things are going, I could be better off at 90 and do them properly.”

Rather than expand the herd, the Tipperary native has decided to expand his knowledge of farming. John signed up to be the host farmer for the Teagasc Grass10 meetings for North Tipperary beef and suckler farmers this year. He is hoping to learn from these meetings, saying: “The more people you get coming to the meetings, the more you’ll learn.”

A future for sucklers

“I was tempted to go dairying last year, but you’re married to it. It’s hard enough to get workers down here these days too. So, I’m sticking to suckling and try to breed the best I can.”

“I’m just trying to be as positive as possible. If you breed good ones, then you’ll have some chance of survival at suckling I think,” he concluded.