That's FarmingThat\'s Farming Irelands Largest Farming News, Properties and Classifieds Network
HomeFarming News‘I would say there always will be cattle for however long we... 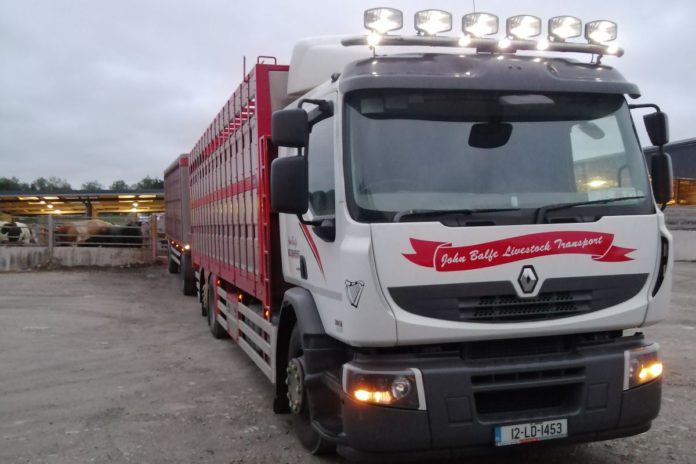 “The main reason I got into the cattle haulage business was to incorporate two big interests, working with animals and driving,” John, married to Ruth, told That’s Farming.

“It was not difficult to set up the business; firstly, I did a small business course.”

“I was farming all the time with my father, and the lorry was just a branch off the farm.

The lorry, fitted with reversing cameras, pulls a Gleeson body and a Jimmy Kelly trailer with a new custom-made turntable trailer ordered.

“The business just took off from there, from one thing and another. You get busier as the time goes on and more customers come.”

“It can be fairly hectic different times of the year, calving cows and trying to get lorry work done as well.”

“You would bring 30 factory-fit cattle comfortably, depending on the size of them. So, you could bring 25 to 40 store cattle between the lorry and trailer.”

“I was hemming and hawing about going for a lorry and trailer set up for a couple of years. Then, I bit the bullet and went ahead with it.”

John has a CPC lorry licence, and every five years, he attends agricultural college to renew his livestock haulage certificate.

Balfe’s company motto is to provide good customer service and be on-time with livestock collections and drop-offs, ensure they “arrive in the same condition they left”.

“I try to deliver cattle safely as possible with as few problems. That is kind of it the way we operate.”

“I like to keep the lorry and trailer presentable too and keep it washed down. It can be a challenge at times, but we try to do the best we can.”

“Furthemroe, I do enjoy going to marts, talking to people, and seeing how trade is for cattle.”

He reflected on one major change he has experienced first-hand in recent decades.

“Livestock haulage has changed in the last couple of years. A few years back, it was more so small farmers killing fifty cattle a year, and you would do a couple of loads every year.”

“A lot of them have stopped or maybe gone into milk or something. We seem to be doing more for feedlots and enterprises like that.”

“Everything has to be dead on, between the RSA and Department of Agriculture, Food and the Marine’s regulations.”

“You have to have everything working perfectly on the lorry. The days of older lorries are nearly gone.” 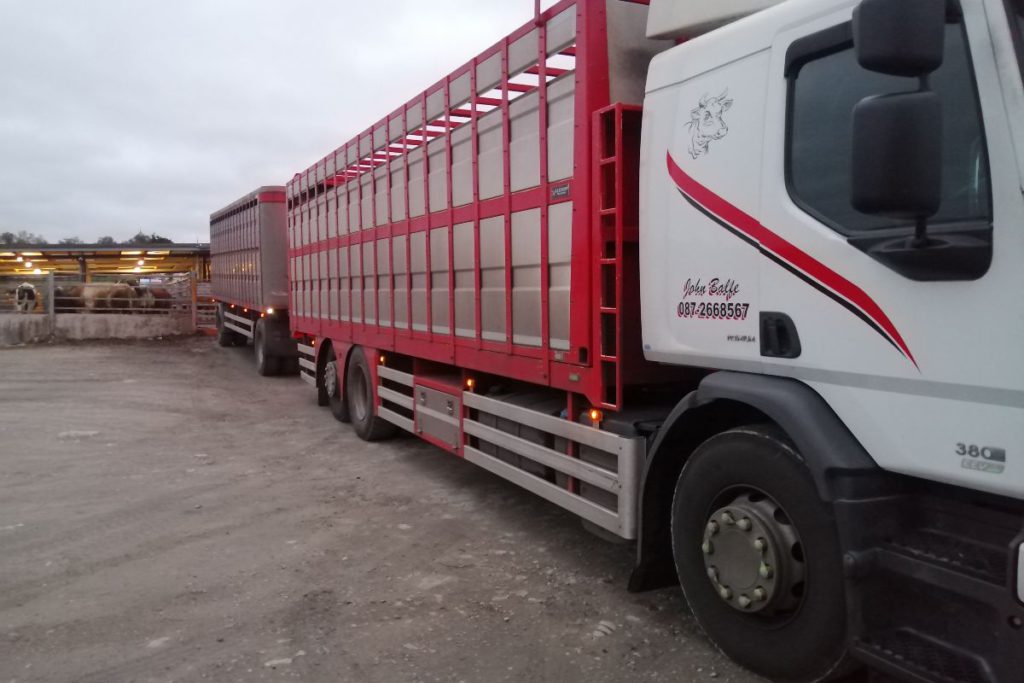 John finds raising a family while working early mornings and late nights as the most difficult aspect of his job.

“You could be gone at 4 am and even before it, getting cattle gathered up and into factories on time.”

“If you are away at a mart in the evening time, you might not be home until God knows when.”

“For a young family, there would be times you might not see them for a couple of days.”

He pointed out that animal welfare is “important” in the company.

Therefore, he and his driver check cattle regularly when in transit and highlighted that driver breaks are important.

“I would usually check them in the first 15 to 20 minutes to make sure everything is ok.”

“Halfway in the journey, you might check again. It depends on the length of the journey.”

Day in the life

John outlined a typical day in his life, juggling farming with his father and hauling cattle.

“This time of year, we would be calving. So, you could come over at 5 am and make sure everything is ok in the yard.”

“I do look at anything that is near calving and make sure everything is alright. Then, I head off for a load of cattle to a factory.”

“I could come back then and do a few jobs around the yard. But, if I had a load to go, and I would not be back, my father would be looking after cattle at home.”

“If I had not another load, I would do whatever else I need around the yard. If something is coming out of a mart in the evening time, then we would be going again then.”

John believes that to succeed as a haulier, you have to be “willing to work, look after cattle, and look after farmers equally”.

He pointed out a regret at the beginning of the venture is to upgrade to his current fleet quicker.

“I probably dilly-dallied around buying the trailer for a while. If the time came back again, I would have bought it sooner, maybe.”

During the Covid-19 pandemic, the rising cost of steel meant John would have to pay an additional €5,000 for his new trailer.

Looking to the future, John intends to continue helping farm the land and hauling cattle, welcoming his sons into the business.

He noted that the company gains new customers regularly, and he has a “very loyal customer base”.

The County Longford native hopes to update his lorry in later years but is sceptical about what environmental changes and carbon emissions may bring.

“There are lots of young people around here eager for work and very interested in working. So, there are many people to get when you need them.”

“People will probably find work that is easier than getting up at silly hours of the morning for a whole day sitting in a lorry. It is not the nicest job, but that will be a challenge,” the haulier, who completed a Green Certificate, concluded.

- Advertisement -
Previous article
‘Beef Plan will in no way, shape or form accept a cull or cap on the suckler herd’
Next article
Cull ewes to €226/hd in ‘sharper’ trade at Kilkenny