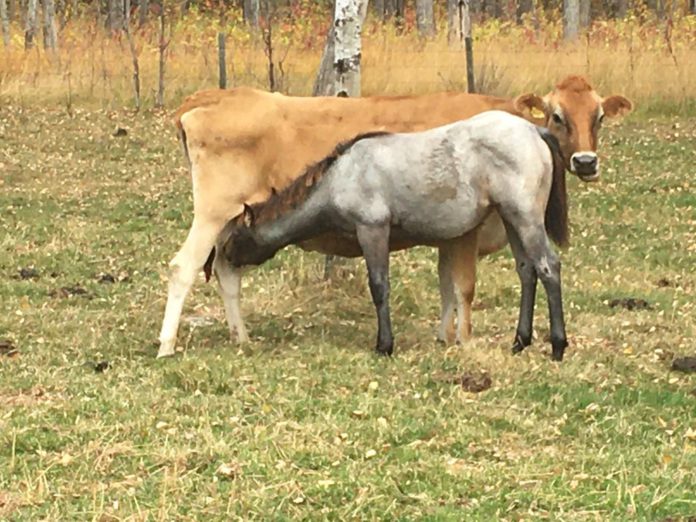 A Jersey cow has become an unlikely foster dam for an orphan filly foal.

Hobo’s dam haemorrhaged after birth and died, which prompted the owners of Miller Quarter Horses to seek a foster mother.

However, this proved to be a difficult task as explained by the Canadian-based enterprise on its Facebook page.

“The saying is ‘it takes a village to raise a child’, however, that is also true for this filly. This spring, I found this filly, early one morning when I went to do chores and check on mares.”

“She was up and very spry; however, her mother haemorrhaged after birth and died.”

“Kyle came and loaded her into the trailer, and we obtained some mare colostrum from some friends. We tried two different nurse mares, one from a cousin, one from a friend”

With both mares rejecting Hobo, the owners reverted to feeding foal replacer.

“I figured Hobo needed some company, so I thought she could live with Doris the milk cow. Next morning, when Doris was milked, she only gave 4 litres, when she would usually give 8-10 litres per milking.”

“Same thing that evening. We then caught Hobo in the act… Doris loves Hobo. Loves her immensely.”

“If Hobo is not in her sight, you will hear Doris bellar for that filly. Weaning time is going to be hard on Doris the milk cow.” the post concluded.