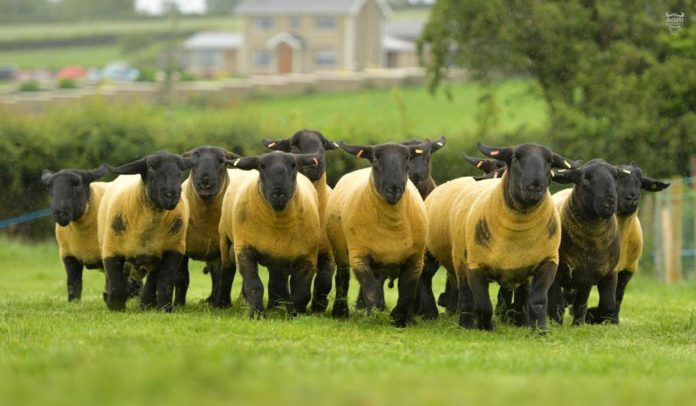 Buyers will be able to select from over 50 Suffolk shearling and ram lambs (approximately 70 lots in total).

According to the breeder, entries are “guaranteed of quality, great carcasses and full of character”.

Also on offer will be Texel shearlings, True Blue Leicester shearlings, and a number of Suffolk-x-Aberfield and Sufftex shearlings.

Reports from commercial and pedigree sheep producers who have previously bought rams from the Jalex team have been excellent, with “tremendous” lambs hitting the ground and performing “exceptionally well”.

Alexander confirmed that all sheep are eligible on the day for export to UK and Ireland. “All lots over £700 will attract luck penny insurance,” he remarked.

Richard Beattie will conduct the auction – Buy at the ringside or online bidding at beattie.marteye.ie

Alexander has pioneered the launch of his own on-farm sales in recent times for both in-calf heifers and breeding sheep.

This sale comes just three weeks after he hosted his “biggest and best” yet breeding sheep sale.

Ahead of the sale, he said:

“We have over 1,000 sharp-headed hoggets with tight skins, plenty of character and bred to have plenty of lambs and milk, that we know will go on and be an asset to any flock. They are naturally grass-fed and will mature into super ewes.”

“All will be on Heptavac P system, ENZO and TOXO vaccinated, dipped, and dosed ready for work. MV Accredited and can be exported to mainland UK.”

Richard Beattie and his team conducted the sale, which saw both ringside and online activity on marteye.ie.