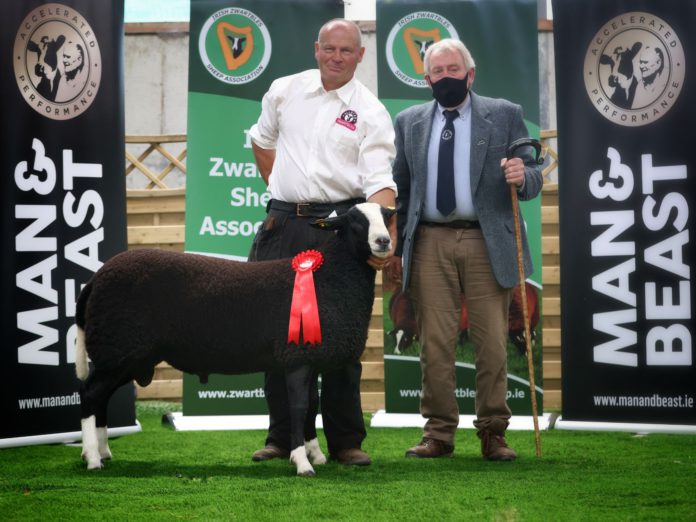 Two new breed record prices were reportedly set for Zwartbles at an official sale at the IZSA’s premier show & sale in Tullamore over the weekend.

P Conroy, of the Twilight Blaze flock from Co. Galway snapped up Allstar Jackpot. He was awarded the reserve male champion silverware after winning the ram lamb class earlier that afternoon.

According to the society, quality rams met with “a very strong trade”.

The male champion, Woodfield Hulk, from the Woodfield flock of C Stephenson, changed hands for €770. Furthermore, Oakvale Jeremy from the Oakvale flock of E Von Cramon climbed to €1,020.

The society spokesperson pointed out that the female section also “met with a very brisk trade”.

The top price female went to the show’s overall champion, Brackvale Jager, from the flock of D Rafferty.

She changed hands at €980, which, according to the society, also set a new breed record price for a female sold at an official sale in Ireland.

Allstar Helen, a shearling ewe, who won the female reserve champion rosette at the presale show, followed on her heels.

Conroy of the Twilight Blaze flock parted ways with this entry for €920. The second prize winner of the shearling class, Finn Valley Harmony, went under the hammer at €880.

In a statement following the sale, an IZSA spokesperson said:

“We would like to thank everyone who supported the sale, vendors and buyers alike. We wish all the buyers all the best with their purchases.”

“Also, we like to thank our inspector on the day, Cathal Walsh, and our judge, Mr Noel Lally, for doing a fantastic job.”

“Finally, we would like to thank our sponsor, Man & Beast, for being there on the day and for presenting our winners with their prizes.”