That's FarmingThat\'s Farming Irelands Largest Farming News, Properties and Classifieds Network
HomeDairy‘It’s great to be involved in the teaching of the younger generation... 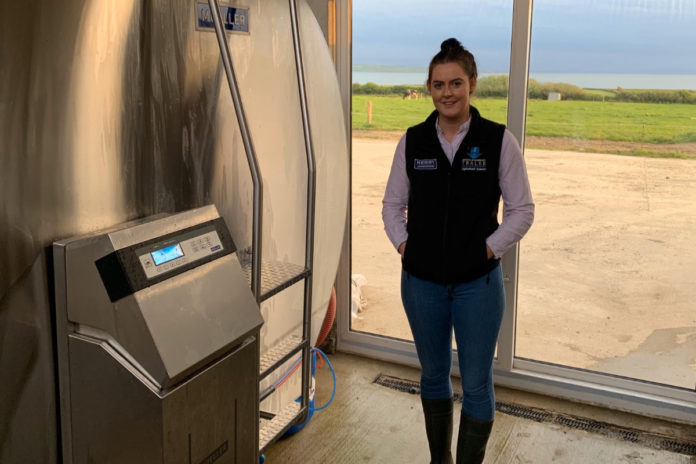 Rachel Clancy went from being a student to a teacher just months after she completed her third-level agricultural science studies.

“I deliver course material in the classroom and am responsible for the delivery and assessment of practical skills.” the fourth-generation farmer explained to Catherina Cunnane – editor of That’s Farming.

“There is a great variety with the job as you are inside teaching and preparing work and outside teaching practicals also.”

“We also have the opportunity to be involved with all college enterprises, helping when help is required,” she added. The Clare native has always had an interest in agriculture and fixed her sights on teaching from an early age.

Her first CAO choice was University of Limerick’s agricultural science concurrent teaching degree, but her Leaving Certificate did not turn out as planned.

“I received two offers on my CAO and I accepted the offer in ITT. It was one of the best decisions of my life – I have made friends from all over the country during my four years at college.”

“I have always had a keen interest in agriculture and education; however, I don’t like being indoors all the time sitting at a desk.

“I like a mix between working inside and outside. I’m the type of person that learns from doing things rather than reading about it.” When she is not teaching, Rachel can be found tending to her 90-dairy cow herd which she farms in partnership with her father, John, in Querrin outside Kilkee.

While her father and brother, Thomas, farm on a full-time basis, her mother, Sheila, a public health nurse, and sister, Ruth, also play a key role in the operation of the enterprise.

“I have been involved in farming since I was a very young age. When we were off school, there was always plenty to do, gaps to be stood in, cows to be milked or fences to be moved.” Rachel said.

“I love milking cows – it’s definitely one of my favourite jobs on the farm. I am involved in vaccinating and feeding animals, keeping records up-to-date, tagging and registering calves, wrapping bales during silage season and general maintenance.” A small percentage of the cows are AI’d, while the majority are served by a Limousin sire from May 1st while a Friesian bull covers some cows and all maiden heifers.

All Friesian heifer calves remain on-farm and are reared as replacements, while Limousin calves are sold at four-weeks of age to the same farmer for the last seventeen years.

The family also keep Friesian bull calves and some late-born Limousins which are reared to yearlings or two-year-olds. Rachel admitted that life as a woman in agriculture presents its fair share of challenges, adding that one often has to prove their capabilities.

“For example, if you go to the co-op or a stand at an agricultural show, you are not always taken seriously until you prove you know what you are talking about.”

“When we are able to prove ourselves, we are treated the same and taken more seriously.”

“I often find when you do get into a conversation with farmers, they are interested in the opinions of younger people – both males and females.” Satisfied in her current role, Rachel plans to continue completing courses and broadening her knowledge. She intends to travel at some stage, with New Zealand taking prime position on her bucket list.

“After being involved in farming since a very young age and progressing through college, it’s great to be involved in the teaching of the younger generation of farmers.

“You should always keep educating yourself until the day you die, as my dad keeps telling me, because you can never learn enough.”

Looking ahead, Rachel also intends to return to her athletics career and relishes the idea of inspiring younger athletes.

“I have been involved in athletics and football from a young age. In athletics, I have competed at county, Munster and All-Ireland-level and have won numerous medals at national-level with Athletics Ireland and Community Games.”

Her main events were the pentathlon, high-jump, triple-jump and cross-country with four County All-Stars for athletics under her belt.

“While I am not actively training or competing at the moment, I am currently acting as secretary of our local athletics club, St. Johns, and I am social media PRO for Clare Athletics.”

If you are a woman in agriculture and you want to share your story, email – [email protected]