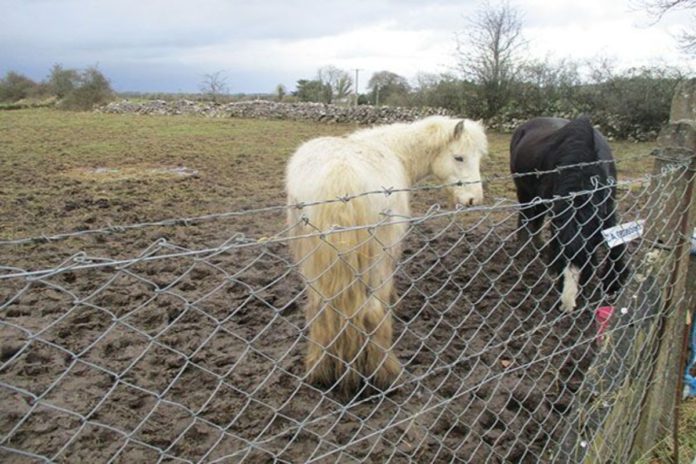 The ISPCA has taken two ponies into their care after they were reported as being abandoned by some worried locals.

The two ponies were found on a plot of land in County Westmeath.

Individuals living in the locality had been feeding the horses and providing them with water as they were concerned about their welfare. As ground conditions worsened, the animal welfare charity was contacted for help.

Elaine Reynolds, ISPCA inspector, came to assess the situation and found the land was “a complete mud-bath with not even a blade of grass, and there was no shelter at all”.

After making some enquiries, she found out that the ponies had been abandoned some time ago. “Shockingly, these ponies were just left there to fend for themselves and only for the intervention of locals and the fact that they are a hardy breed type, they would never have survived.”

“They are now safe in ISPCA care and once they receive the veterinary all-clear, we will go about finding them new homes.”

The ponies, named Guinness and Tayto, were seized and transported to the ISPCA for veterinary assessment. Only one of the horses was microchipped but there was no up-to-date registration for this animal.

Investigations are continuing to locate an owner. The ISPCA is appealing to anyone with information to contact the national animal cruelty helpline in confidence on 1890 515 515 or email helpline@ispca.ie

- Advertisement -
Previous articlePotential Covid-19 vaccines to be tested on animals
Next articleVIDEO: Covid-19 – How to protect yourself