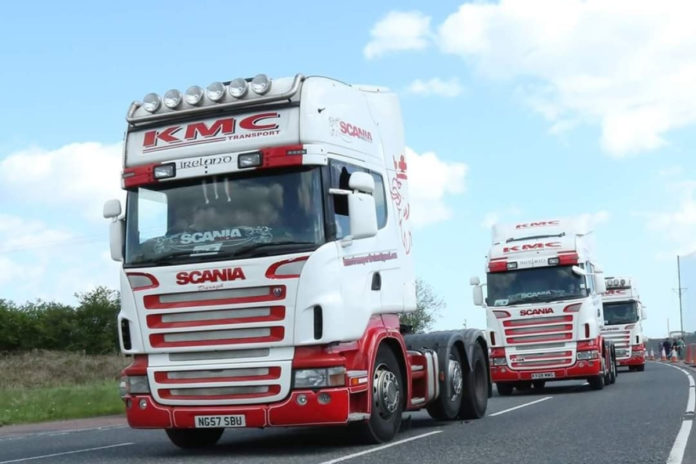 A haulage company from South Armagh have decided to raise much-needed funds and awareness for some well-deserving causes during these challenging times.

KMC Transport Ireland are based in Crossmaglen and have organised a charity truck run, which will take place on Sunday (May 24th), in order to purchase PPE gear for local healthcare professionals.

Speaking to That’s Farming, Kevin McCreesh explained why he felt this to be so important during the current crisis.

“I have friends whose wives are nurses, including my transport manager, and I was hearing stories through the grapevine that there was a serious lack of PPE and a continuous lack of it.”

Kevin then decided to make contact with local healthcare workers to find out the full extent of the problem.

“What they go through in a day at the minute is massive,” he revealed. “This one particular person is going through 70 or 80 pairs of gloves each day alone, 7 days a week.”

Having previously taken part in truck runs with Kings of the Road Ireland, he felt this could be his way of raising funds to provide for the healthcare workers, both north and south of the border.

He estimates that the number of trucks in attendance at this upcoming event could be anywhere between 100 and 300.

“We’ve had a massive amount of interest. It’s very hard to estimate but the more the merrier. There’s not a lot happening at the minute, so interest has been very positive.”

Before going ahead with organising the event, McCreesh had to make sure that it was going to be perceived well and be an appropriate way of fundraising.

“I was very apprehensive and nervous at the start and I tested the waters with a few local nurses first – just to see if it was a really bad idea but the feedback was really positive.”

“We have had no negative comments at all, even though I was prepared for them. I could see where people would be coming from if they did but thankfully it has all been received well so far.”

With COVID-19 and social distancing in mind, Kevin has made sure that all measures are being taken to minimise risks.

“We’re trying to keep it short and sweet. We’re assembling at 2, leaving at 3 and finishing at 4 because we don’t want people standing about. It’s a bit of a catch-22 situation because you don’t want to be the cause of more COVID cases, so we’re being very cautious in that sense.”

Despite all the positive feedback and praise he has received for doing his bit for the healthcare workers, McCreesh told That’s Farming that all the attention and praise should go to those on the frontline.

“It’s really hard work being a nurse, they’re really exposed at times. Some of them are having to come home and self-isolate from their own family. I have the utmost respect for all of them.”

“People will say that the trucks are essential workers, but I’m only doing what I have always been doing. I’m driving a lorry today, I’m not in any danger. It’s the nurses and careworkers that deserve the publicity and respect.”

“If we can get a few quid and a few bits of PPE for them, that’s what we’re going to,” he concluded.

If you wish to donate and support this fundraiser, click here.