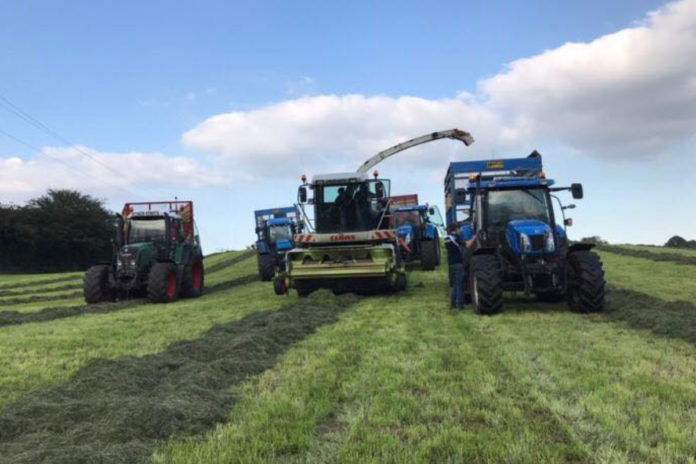 24-year-old Daniel Marshall established own agricultural contracting firm with a hedge-cutter in 2016.

Coming from a farming background, the owner of Marshall Agri Contracts, which is based in Templepatrick, Co. Antrim, explained to That’s Farming how his interest in machinery was sparked.

“My grandad milked cows and his brother kept sheep as well. When my grandad sold the farm, I started to help my great uncle with his silage.”

“He allowed me to use some of his machinery along with my own to get started. I hadn’t much interest in the sheep and the cattle, I was interested in the machinery.”

He finished his A-levels and went on to study at Greenmount Agricultural College; he established his own contracting business when he completed his studies.

That winter, the young Antrim man went over to Scotland and then onto New Zealand for a season, before returning home and expanding the business into silage contracting with a McHale Fusion 1 baler.

“It started off well. I then started sowing grass seed and spraying with a 12-metre, 600-litre sprayer with manual booms.”

“A lot of people were keen to give you a chance and then there were other people who wouldn’t give the young boy a chance, but there were more people giving you the opportunity than there wasn’t.”

“One of the best things I did was buy a Fendt 415 when I came back from New Zealand. It was a big move, but it caused people to take me seriously because I had a good tractor.”

Growth of the business

After such humble beginnings, the last 4 years have been a time of significant growth for the business, whose services are no longer limited to just hedge-cutting and baling.

In addition to this, he has begun to cover new areas as well, such as Scotland and England.

“I’ve sent tractors up to the top of Scotland. I have done a few seasons out there for a good friend and this year we decided to send a tractor and driver out. I have a tractor in Guilford today actually, but at home, we usually cover most of County Antrim. If there’s work there, we will go,” he exclaimed.

In terms of output, Daniel said that it varies every year. He estimates that his two balers produce about 10,000 bales each year, but weather conditions have a huge part to play in the work that they do.

He currently has 1 full-time employee as well as up to four seasonal staff. His father plays a role in the business also, helping out when needed.

“It’s good to have another person’s view on it too. My dad’s a butcher but he’s still involved. He would drive for me or go get me parts and give me his opinion but it’s my company at the end of the day.”

Expanding the fleet meant the need for an increase in workload too, which is something that can be done if you’re ready and willing, according to the Antrim man. Competition with other firms is the biggest problem he faces when it comes to new business.

“A big problem we’re having is with prices and people undercutting you. You need to try and do things that other people aren’t doing because it’s hard to compete with the big-timers.”

“I have a lot of repeat customers all the time but you still get some new people every year. There’s plenty of work out there if you want to do it.”

“If you’re serious about it, go at it,” is the advice he would give to younger generations, as a lot of the time his work can be opportunistic.

“You need to be there and ready to do the job. A lot of the new work you get is when someone else can’t do it, so if you do it well the first time, you’ll have it from then on.”

Marshall explained that the success of his business to date has been down to the quality of his work, which is something he takes pride in and gets satisfaction from.

“You try to do the best job that you can and don’t take any shortcuts. I like when you’re finished a job and you can look back and see that it’s done right. It makes the lack of sleep worthwhile.”

- Advertisement -
Previous article€50 million Beef Finisher Payment scheme – everything you need to know
Next articleQUIZ: Is it Shirley or Char-lee?