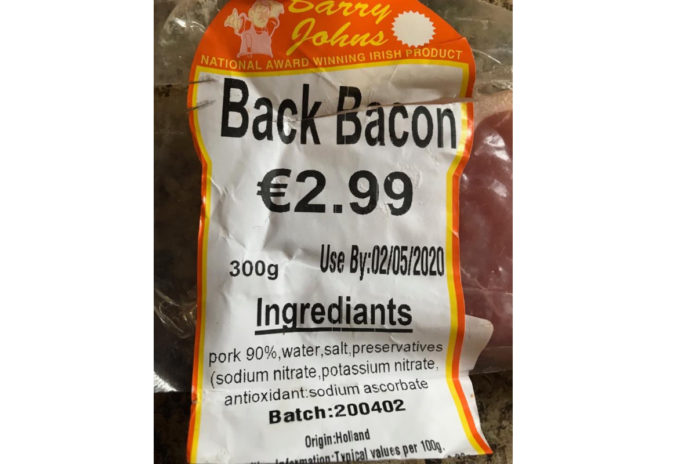 Back Bacon, originating from Holland, has been found in a retailer in Co. Meath recently, where it was marketed as an Irish product from a butcher in Co. Cavan.

A picture of the product was shared by Frank Brady, a pig farmer and chairman of Monaghan IFA, who questioned the butchers’ support of local farmers.

The image hit social media yesterday afternoon (Tuesday, April 14th), with a comment from Brady saying: “So much for one of our own supporting Cavan farmers.”

The IFA representative told That’s Farming: “Normal people will rarely go down and look at the small print on meat to see that it’s from Holland.”

Brady said the pork industry in Ireland is struggling at the moment as a result of disruptions in the export market.

“It’s struggling because China is our biggest market and we’re being told that they can’t get the containers out there.”

“There is more and more going out every week, but farmers will soon be at breaking point, if it keeps going the way it’s going. We’ve had 4 reductions in the last 6 weeks.”

“We export most of our meat, so there should be no need to import bacon from Holland.”

Frank concluded by asking the Irish consumer to support Irish farmers during this time.

“Every country in Europe has become very patriotic since the Covid-19 outbreak and, hopefully, the Irish people will do the same.”

“We need to support Irish lamb, beef, milk, pork and chicken in order to get the economy back quickly and to support local industry,” Brady concluded.

Barry John’s Butchers’ was contacted to comment on the matter, but, at the time of writing, we have received no correspondence.