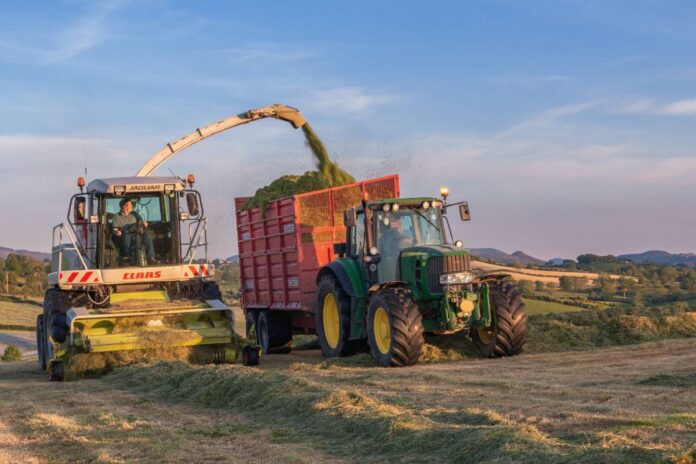 In this article, Brushtec examines how climate change is impacting Irish agriculture.

Climate change is already having a huge impact on the lives of many people across the globe.

But it is not just affecting people on an individual level, as so many industries are feeling the impact of climate change in different ways, including hospitality, energy companies, and of course, agriculture.

Farming will be impacted all over the globe, and the Irish agricultural industry is no exception.

For example, based on current weather patterns, it is predicted that yields for winter wheat and spring barley will decrease by over 10% in some Irish regions in the future (TEAGASC).

And it is not just physical change produced by the environment that affects the industry either, but people’s attitudes towards agriculture as well.

Many fear that the sector is not sustainable in its current form, as the industry accounts for 33% of total greenhouse gas emissions in Ireland (TEAGASC).

So how exactly has climate change been impacting Irish farming?

Agricultural brush manufacturers, Brushtec, are here to take a closer look at the issues faced across the country.

For decades the growing seasons have been predictable in Ireland. This has allowed businesses in the agricultural industry to develop a growing plan for the year ahead.

Unfortunately, the weather has become much less predictable over the past few years. In fact, over half of Ireland’s farms have already been impacted by extreme weather events.

Over a third of farmers in the country are concerned about how similar extreme weather patterns will impact their farm in the future.

This has made it more difficult for farmers to plan their farming activities, which will undoubtedly have an impact on their mental health and well-being as well as their economy.

However, one of the few things which has been predicted with relative certainty is that Irish weather is set to become wetter.

This has already had some impact on the country, as a report from the Republic of Ireland’s Environmental Protection Agency has found that rainfall increased by 6% from 1989 – 2018, in comparison to the previous 30 years.

This increase in rainfall is not all bad news for Irish agriculture. One benefit of higher rainfall is that it can help increase grass yield.

This, in turn, can both attract more pollinating insects and cut costs for livestock farmers, who can spend less on concentrate feed as the animals can graze on this grass (TEAGASC).

However, the increased risk of flooding is a significant concern for farmers across the country. They fear the drastic impact this extreme weather event can have on both their crops and livestock.

A popular method of offsetting the carbon footprint of a business across the globe is planting new trees.

Planting new trees on a farm can come with many other benefits, too, including:

Despite these benefits, last year, tree planting across the country was at its lowest level since 1946.

However, this all may be set to change in the near future, with a scheme which will financially reward farmers for planting trees on their land.

As a poll has found, a staggering 35% of Irish farmers struggle to meet household bills; many may be interested in taking part in this scheme.

However, despite the many benefits it can have, planting new trees can have a negative impact on both Irish agriculture and the environment if not done correctly.

Planting trees without proper planning and knowing where to put them can affect water quality, air quality, and biodiversity.

And, if the trees are planted on existing agricultural land, this can both cut the amount of profit a farm can make and increase reliance on imports in the wider economy.

So, while planting trees can be beneficial to both the local farming ecosystem and the environment more generally. Take great care to select the correct species and location.

The increase in regenerative agriculture

As people grow more concerned about becoming eco-friendly consumers, many farmers seek solutions that will reduce their impact on the environment without taking too much of a toll on their profits.

One way many agricultural workers are doing this is by shifting to regenerative farming to rebuild topsoil and increase biodiversity.

Ireland is known for having good quality soil. However, the EPA has concerns that climate change will lead to soil erosion. So, taking good care of topsoil across the country is vital (ARC2020).

While there is no one way to practise regenerative agriculture, a few methods include:

While the practice is beneficial for the environment and has proven to be profitable for some, it does have its downsides too.

For example, regenerative farming can cost a lot and is very labour-intensive, so it is not accessible for many farmers.

It also takes a lot of time to notice the benefits, so farmers who put their time and money into the practice will have to be patient, waiting for results.

Consumers are more concerned about making sustainable choices than ever before.

In fact, a report from PwC on Irish retail found that 41% of Irish consumers are willing to pay more for sustainable products. But how exactly does this impact Irish agriculture?

Well, one lifestyle change that many are making for the sake of the environment is eating a more eco-friendly diet. This has both upsides and downsides for the agricultural industry.

An increasing number of consumers are adopting plant-based diets, as they believe them to be better for the environment. This will no doubt have had an impact on dairy and meat farmers, alongside other factors such as the pandemic.

However, it is not all bad news for Irish agriculture.

While the number of people with plant-based diets are on the rise, only 8% of the population are vegetarian. Furthermore, just 2% are vegan.

Therefore, the vast majority of Irish consumers are still buying meat and dairy products (Board Bia).

Another benefit of these changes is that many Irish consumers see the value of organic produce.

Not only this, but 46% agree that they would be willing to pay more for organic food and drink (Statista).

On top of this, 50% of respondents in a Deloitte survey claimed that they would be happy to spend more on local products, including their groceries.

Cleary, Irish consumers still value the work of their local farmers and want to do their bit to help the agricultural sector in their area.

- Advertisement -
Previous article26-year-old’s move from terraced townhouse to 200-strong sheep enterprise
Next article‘Many people are drawn to smoking to calm down, in particular, when feeling burnt out’