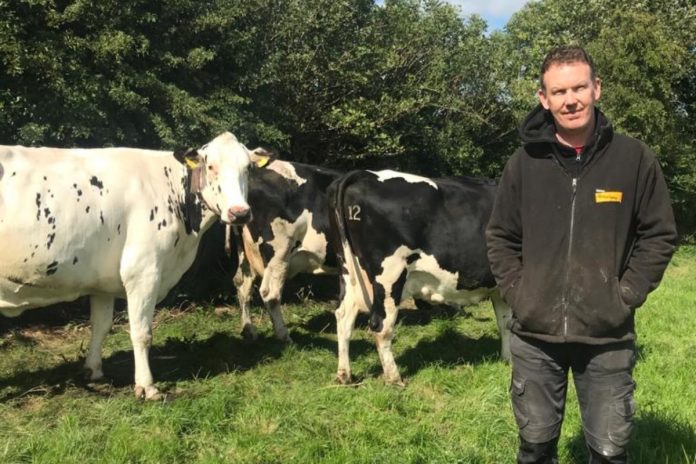 Tullynacross Farm, situated in the heart of Poyntzpass, Co. Armagh, is the “first” fully automated dairy farm in Ireland and the UK, according to its proprietor, John Rafferty.

The incorporation of technology has helped the 44-year-old’s thriving 170-acre dairy enterprise reach new heights. Dairying is a family tradition that was started by his father, Pat, in the late 1960s, who is still involved in the calf-rearing end of the enterprise.

The farm has undergone a radical transformation over the last decade, with technology proving to be invaluable when it comes to saving time and money and the provision of data.

“In the years previous to 2008, our herd was mostly autumn/spring-calving and grazing outdoors.” John, best known as ‘The Robot Farmer’, explained to Catherina Cunnane, editor of That’s Farming.

“Our old parlour needed to be upgraded, so we decided that we would put a new parlour in, and it was only by chance I came across robotic milking.”

“After a lot of studying and thinking, we decided we would robots in but first, we would have to keep the cows in all-year-round so we purchased a zero-grazer to see how cows would do indoors.”

After a successful two years indoors, they installed 2 Lely astronauts, an A3 in November 2010 and the Lely automatic feeding system followed in 2012.

With the success of their robotic milking system, they purchased feeding equipment including a Lely Discovery in 2014; a Lely Cosmix in 2014 and a Lely automatic calf feeder in 2016.

“The Vector has saved approximately £170 per month on diesel and it has saved me a lot of time roughly, 30-35 hours per week in feeding.”

“The herd calves all-year-round to suit robots to try to keep production the same every month but no calvings take place in July so I can go on holidays.”

“We strive to keep medium-sized cows with a good chest depth and width, good feet and legs and a temperament.”

They rear their own replacements, which calve down at 24-months, while all beef calves are kept for 7-8-months and sold as strong stores.

“Every year, I try to improve my milk from forage figures, although, that can be very weather-dependent.”

“Grassland management is important to me as I have been zero-grazing this past 12 years. I only want quality going into cows, be it silage or fresh grass,” added John, a member of BDG (Business development group) with local farmers and host farmer for a Technology Development Group (TDF) based around cow mobility and preventive measures in lameness in association with CAFRE.

“With robotic milking, finishing time with me is never the same – It can be 9pm or later. If going out with family, my finishing time could be 5-6pm, but ideally, 7:30pm would be a good time to finish.”

John is satisfied with the current performance and size of the herd, with an objective to maintain the herd at 150-160 cows and produce a level supply of milk all-year-round to make his robots more efficient.

“My ambitions for the herd in the next few years is to produce a tonne of solids/cow/year by increasing yields and butterfat and protein.”

“Going forward, the focus will be to keep on improving grassland and to be as efficient as possible – we would like to invest more in renewable energy to add to our 20kw PV solar panels,” John concluded.

- Advertisement -
Previous article
‘Everybody benefits? I’m guessing a lot of farmers would disagree’
Next article
‘I had a desire to be a part of one of Ireland’s most exciting industries’