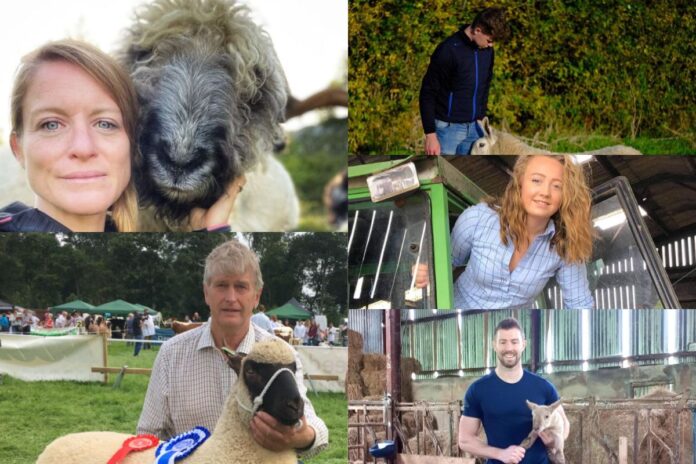 In this article, That’s Farming, previews the profiles of five of our most popular sheep farmers of 2022.

With his son, Stewart, they operate an enterprise of primarily commercial sheep, some pedigrees and circa 55 suckler cows.

“Ewe numbers have increased naturally over the years, standing at between 800 and 900 at present.”

“We try to breed sheep with good maternal traits, good prolificacy and the ability to rear them well.”

“Regardless of the hard work at times, it is very satisfying in the late spring and early summer evenings when checking stock to stop and enjoy watching lambs and calves enjoying themselves and feel that it is all worth it.”

“The rocketing costs of inputs at present are not making it any easier,” he remarked.

Read more on this story.

Claire is originally from Hampshire in the South of England, but she currently resides in the canton of Valais in Switzerland.

With her husband, they began their enterprise from humble beginnngs with six sheep and six goats to graze the pastures.

They have mainly rustic local breeds, such as Red of Valais and Valais Blacknose. Furthermore, they also have a German breed called Heidesnucke, which is a very hardy and ancient breed.

These breeds are also often rare, such as the Red of Valais (Roux du Valais), which was on the brink of extinction in the 1980s.

She told us: “We have selected breeds that are adapted to thrive in the mountains and our way of life.”

“Such as moving by foot, the ability to cope with tough terrain and conditions and thrive on the forage that is available to them.”

“Once in the alpage, these breeds graze as a group, rather than separating out which makes it easier for the shepherd to manage the flock (as they are free, with no fencing).”

Read more on this profile.

McLoughlin (18) hails from Trim in Co Meath, where he runs a flock of Border Leicesters and Ryelands under the ‘Royal’ prefix and established his own business, Ciarán’s Yarns during the time he spent in transition year at the age of 16.

All my wool for his yarn comes from his pedigree organic flocks in the heart of County Meath.

“I set up Ciaráns Yarns as I wanted to showcase the amazing natural woollen products that I could produce from my rare breed flock’s fleeces, which were previously underappreciated.”

“I had this light bulb moment in the summer of 2020 when I was told about the harsh reality of the value of my premium wool after shearing.”

“Honestly, I was told that I would be lucky if the sale of my wool would cover 20% of my shearing costs.”

“So, I decided to keep my high-quality fleeces my sheep produced and find an alternative to my newfound problem.”

Coming from a background of pit labourers and nurses and growing up in a terraced house in the city is a far cry from Amy Donkin’s current sheep farming life.

Although farming does not run in the County Durham native’s family, she has embraced farm life to its fullest, having moved to Teesdale, England, around fourteen years ago.

She told That’s Farming: “Some of my earliest memories involve helping my stepfather with his sheep when he met my mam. I was bitten by the farming bug from then.”

“My mother and stepfather met when I was six-years-old, and he had very few sheep at the time, about 20.”

Read about her journey to becoming a farmer.

He is also a carpenter by trade and works in the industry during quieter farming periods throughout the year.

“Firstly, we have 550 Texel/Suffolk/Belclare/Cheviot-crosses and 200 Scottish Blackface. We chose the Scottish blackface because of its resilience to conditions such as weather. They are also great mothers to their lambs.”

“Also, we cross Texels with these ewes and keep the first cross; this brings hardiness from the scotch and also brings great finishing ability from the Texel. We keep these ewes in lower hills that my father has improved over the years.”

“Furthermore, we cross all these ewes with Suffolk rams. We sell some as store lambs and send others to the factory.

[Article compiled based on view counts]