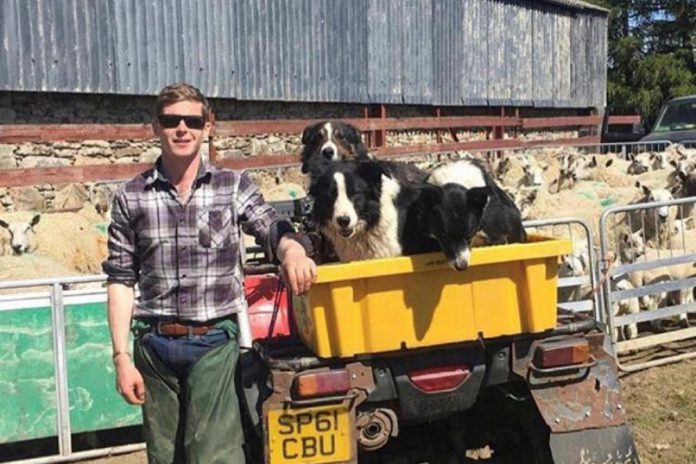 Hailing from a large-scale sheep and beef enterprise in Co. Derry, Eoin Kelly spent time working on various sheep enterprises before returning to the home farm.

When he left school, his said his father would not allow him to work on their home farm until he had earned a qualification in the building trade, so he decided to start an apprenticeship in joinery.

While learning his trade, he also began taking courses in Greenmount to become a shearer, alongside his twin brother, Jonathan, and a friend. They then decided to start a shearing business together, called Crockattagart shearers after their farm.

“We sheared together for maybe 4 or 5 years until I got my first qualifications in joinery. That same year I headed to Scotland to do my first lambing with 2,500 sheep indoors,” he explained to That’s Farming’s Cian.

The years following were spent travelling to and from Scotland to lamb sheep, both at home and on the Island of Islay, lambing 3,000 sheep outdoor.

Hard to believe that at this stage Eoin had yet to turn 20 and had achieved so much, but that was only the start. He then became a farm manager on a 2,500-ewe farm with 400 cattle also.

“We were farming away there for a long time. I rose the sheep numbers by another 1,000 or 1,500 and changed the breeds from pure Blackface to Cheviot, Welsh and Blackface.”

“That farm thought me a lot from the paperwork and management side of things, you’re running a business more or less.”

“I was able to use my joinery skills to put in new handling facilities and we did a lot of concrete and tidied the place up. I pretty much thought the farm was my own.”

“I would only see the owner once every 2 months, so I was left to run the whole show. It was one hell of an experience.”

After 5 years, he decided that he had learned as much as he was going to learn on that farm and set off to find other opportunities to expand his knowledge.

The next few years were spent across Great Britain, working on various farms of different scales and farming systems for shorter periods of time than he had previously.

“At that stage, I was starting to think to myself there’s not much point in killing myself working for everyone else, I might as well do it for myself.”

This was the point where Eoin approached his father and asked to come home to farm full-time.

“I suggested going into a partnership, renting some more land and increasing the size of the flock. At that stage, we had about 300 ewes at home and 10 cows.”

“I went under the Young Farmer’s Scheme and rented another 800 or 900-acres, between fields and hill ground. I got a grant to buy new machinery and meal bins. Then we bought more heifers and sheep to build up the numbers.”

He then decided to start importing ewe lambs from Scotland, rearing them to hoggets and selling them in local sales. Eoin explained that the reason for importing the lambs is down to quality as well as quantity, as it is “rare to get both on the island of Ireland”.

“We’ve been doing that now for 5 or 6 years. Some years it was brilliant, other years you were just breaking even, but we took the good with the bad.”

“We have enough land here and isolation areas, so the first year we took in 400 lambs and have carried it on ever since.”

While still continuing the shearing business, the young farmer decided to bring a dipping service into their operation. He invested a dipping trailer alongside his twin brother last June and it took off so well that they bought a second trailer before Christmas.

They have now decided to start breeding stock themselves, with around 750 ewes lambing this year. They kept some of last year’s Blackface imports and went over to Scotland again to find more ewe lambs to build a flock with.

“We bought about 100 Cheviot gimmers last October and went to Carlisle to get the original Bluefaced Leicester rams, to breed the Cheviot mule. We bought some top-quality stock tups in Ballymena as well for our Lanarks and Blackfaces.”

Even though he is building a flock, he has not deviated from the imported lambs for the hogget sales. This year they bought in 480 ewe lambs once again.

“A lot of work goes into it, but we’re slowly and steadily rising up the numbers,” Kelly explained.

Having found a partner on the BBC TV dating show, ‘Love in the Countryside’, they are now expecting their first child together in the next few weeks.

Coupled with the first lambing of his own flock and a new off-farm job as a salesman, the Derry man is excited for what the future will bring.