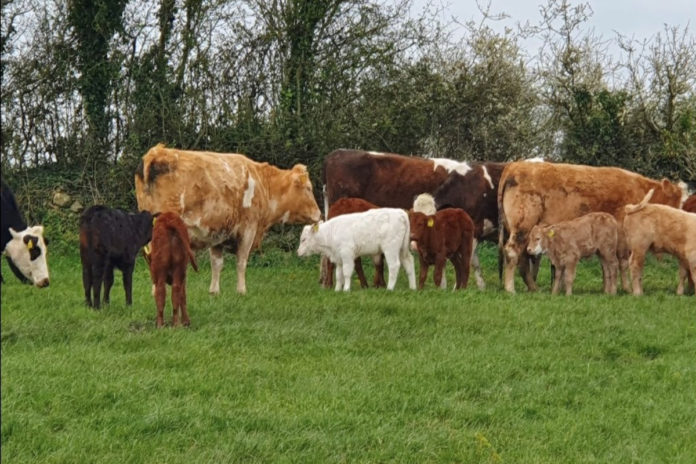 Juggling his commitments between his family, farm and career can be challenging, but Dr PJ O’Connor would not have it any other way.

The Offaly man has been working for Grassland Agro for the last number of years while managing his suckler farm alongside his parents, John and Margaret.

PJ is a product manager for the company, where he is responsible for the technical aspect of fertilisers as well as the training of more than twenty sales staff in the areas of fertiliser planning, animal nutrition and enhanced fertilisers.

He joined the firm in 2012 after finishing his PhD on nitrogen in grasslands through Moorepark and University College Dublin. He is now married to Sinéad with two children and, coupled with his career and family farm, is never idle.

The O’Connor family are based in Ferbane, where they farm 20 suckler cows as part of a calf-to-weanling/store system on 60-acres. Bulls are sold as weanlings and all heifers are sold as stores, with the exception of a number of replacements.

PJ also purchases dairy-cross calves, with either Simmental, Limousin or Charolais blood. He rears them with a view to introducing them to the herd as replacements and those that are not retained, are sold as stores. The Offaly man cited shed space as the main barrier for not finishing animals.

“The breeding strategy is 100% AI. There’s no bull on the farm because my father is in his mid-70s. Therefore, we don’t want a bull around the place for safety reasons. AI bulls offer better genetics as well.”

“From the BDGP perspective, the average of the herd is 5-star. I put a lot of focus on milk – that’s why the dairy-cross animals get brought in. My major focus is on keeping the carcass as well, I don’t sacrifice on the carcass of the cow.”

Calving predominantly takes place in the spring but some cows are pushed out to October. The reasons for doing so is in the hope that they will have bull calves from the autumn cows, which can then be used as teasers.

“I started calving this year on February 2nd and finished at the start of April. It’s a relatively tight calving window and the average calving interval of the herd is 362 days.”

The farm is divided into paddocks and grassland management would be a major factor in the efficiency of this farm, with PJ bringing all the expertise he gained from his studies and research back to the home turf.

“I have approximately 40% of the farm reseeded in the last 2 years and I also subdivided as I went along to make paddocks.”

“I run two groups; the cows and the stores, and each group will get about 10 paddocks allocated to them.”

“Quite tough” is the response he gave when asked about his work-life balance, along with a good laugh. “I’m lucky that I’m on the road, to everywhere and nowhere at the same time. So, I can throw an eye on things when I’m passing or if there was calving going on I could work remotely and duck in and out.”

“My father and mother are awfully important in that sense. They are a vital part of the day-to-day running of the farm and a key part of the success of the breeding strategies implemented to date.”

“My mother would be more involved with the cows, in terms of picking bulls. We don’t just look at the figures but at the bull as well, and she would be the one to make the call on that side of things.”

Weighing cattle is an important activity on the Ferbane farm, with an investment made in weighing scales and regular recording taking place.

Last year, their bull calves achieved 1.34kg of average daily gain (ADG), whereas heifers had an ADG of 1.37kg. The average of the herd was 43% of the dam weight at 200 days post-partum.

“The average weight of the cows is 738kg, so they’re big cows. Some of my best cows have done 50% of their weight and the top-performing bull did 1.6kg a day, so I’m quite happy. I’m a big advocate of weighing and of grass. Those figures are off grass alone.”

“Tough trade” were the words of choice when asked about the current situation with suckler farming. “To be a suckler farming you want to be mentally tough because it seems to be a target from every angle.”

“I have a passion for farming. I enjoy the calving season, even though it’s tough, and I enjoy seeing what the next year’s crop of calves are going to do. Along with the grassland management and trying to get the best out of your cattle is what I love.”

The Grassland Agro product manager is heavily involved in the agricultural industry, not only through his farm, but through his work too. He has seen changes in the industry over the last eight years and believes the new challenges should be embraced.

“The agricultural industry is the best place to work. It’s always changing, moving, you’re always learning. One thing I would say is it’s becoming more competitive and further education is becoming more important.”

“It’s not for everyone, but if you have any grá for it all, go for it and don’t question it. Everything is a long time looking forward and a short time looking back,” he concluded.