That's FarmingThat\'s Farming Irelands Largest Farming News, Properties and Classifieds Network
HomeDairy‘I won’t deny that I had to prove myself twice to many... 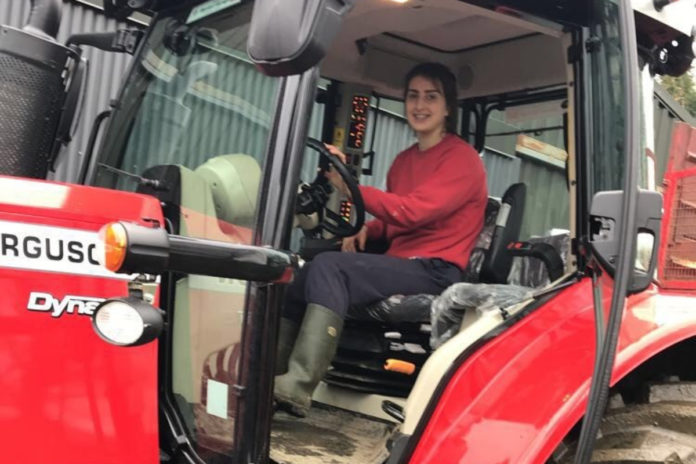 19-year-old Ciara Byers claims that she would not change her farming lifestyle “for the world”.

The Ballyjamesduff, Co. Cavan native studies agricultural science at UCD and assists with the running of the family dairy enterprise.

Her father, Nigel, inherited the farm from his father, who still helps with milking duties, close to three decades ago.

“I was out on the farm as soon as I could walk and had a strong interest from the get-go. I was always asking 101 questions about everything and anything about the farm.” she told Catherina Cunnane, editor of That’s Farming.

As Ciara grew older, she was never entirely sure what career path she wanted to take, but she always had a strong passion for farming.

“I would definitely admit that until I was about 15, I was always afraid of what other people would think if I was to say I wanted to pursue a career in agriculture.”

“Once I finished transition year, I knew that agricultural science was the course for me, and I wasn’t ashamed to admit it.”

“I learned to be myself and to not worry about what anyone else thought. My parents and my close friends were never anything but supportive.”

Ciara enrolled in UCD’s agricultural science programme in September 2019, following the completion of her Leaving Cert, and will graduate in 2023.

She was a member of the winning Great Agri-Food Debate team and was the recipient of the Best Speaker Award.

The young farmer intends to complete part of her PWE (Professional Work Experience) module overseas, with her sights set on New Zealand or the US. “I am a firm believer that travelling and seeing different farming systems is an invaluable way of learning and developing systems at home in Ireland.”

When she is not studying, the 19-year-old can be found on the family’s 200-strong dairy cow farm.

Ciara, her father, Nigel, mother, Pamela, brothers; Matthew (16) and Aaron (14), grandad, Denzil, and one employee, Krzysztof, oversee the running of the operation.

“My grandad is always the first one up in the house and has the cows brought in using the quad in the mornings before anyone else starts to rise out of bed.”

The 60:40 split spring-autumn herd of high-yielding cows pass through a Westfalia herringbone 16 double-up system which was installed in 2009.

“We use AI and stockbulls – Dad is trained in AI, so this saves time and cuts costs. We synchronise the heifers and use sexed semen on them.”

All Friesian heifer calves are retained as replacements, while Friesian bull calves are sold at 6-weeks of age; all Aberdeen-Angus progeny are slaughtered under 24-months.

“I love how rewarding it is knowing that we are putting milk on shelves that everyone uses for their breakfast.”

“I also, work for a local contractor during the summer. My love for machinery really started when I was asked to be a committee member of the 32 County Bale Challenge.”

Ciara admitted that when she made an appearance on the agricultural contracting scene, she was “definitely met by some strange faces”.

“I won’t deny that I had to prove myself twice to many farmers. Once, because I was new and twice, because I was a female, but I am glad to say that after a few summers of working, no farmer questions my ability anymore.”

Gender inequality is not an overnight fix, the student stressed. “I’m glad now to be able to say there have been big steps in the right direction.”

“As there are still older generations, who are more set in their traditional ways, it isn’t just as easy as clicking your fingers and everything will be rosy the next day.”

“I believe if a woman wants a job enough, she will work hard enough and will achieve that dream.”

Looking ahead, Ciara relishes the idea of combining her passion for travel with an agricultural-based career.

“I hope to see myself in the future with a job that I don’t consider a job because I enjoy it so much. Who knows, I could be at home running the family farm or I could be a CEO of an agricultural company.

“I am proud to be able to say I am a farmer and being brought up the way I have has moulded me to be the person I am today,” Ciara concluded.