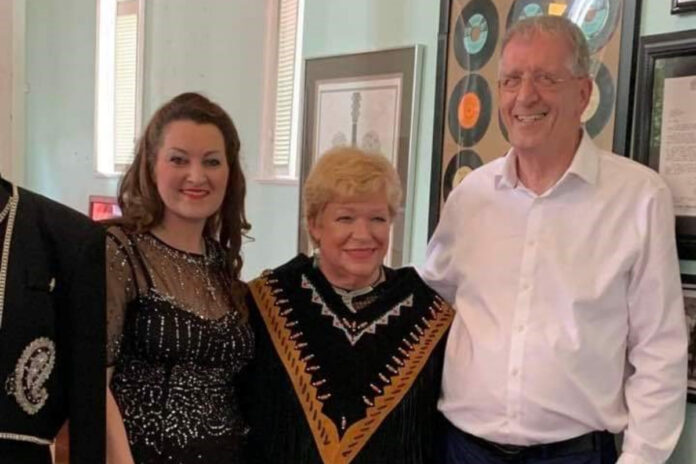 Baker – who invited Mc Cauley to Canada – described her as “not only one of the finest female voices I have ever heard, but she has that extra special ‘it factor’ that is needed to be a star”.

“She is real, humble, sincere and has a generous spirit, all of that on top of talent. I became a fan by seeing her posts on Facebook. Somehow, I knew we would connect on every musical level that was right and good.”

“I did a Facebook Messenger call with her. Honestly, I have never done that with a person I do not know on a personal level. We talked, and I knew I had found someone very special.”

She added that Lorraine came to Nova Scotia, Canada, and “very few people knew who she was”.

“I have no doubt that everyone who heard her sing at the Carroll Baker Mem’ries weekend knows who she is now.”

“She received a spontaneous standing ovation for her version of How Great Thou Art, which is as good as it gets. Ovations can sometimes be overdone, but when spontaneous, it is the real deal.”

“I knew I was right about her, and I only hope Lorraine Mc Cauley’s star gets to shine as bright as it should,” she concluded.

The Donegal native performed some cover versions and some of her own tracks, including her latest self-penned single, Dear Lord, Lay your Gentle Hands Down.

Lorraine joined Dolly Dunn on stage for a duet of Back Stabbin Woman, which Dunn originally recorded with Georgette Jones.

“I was blessed to be among an amazing group of performers, with an overwhelming amount of volunteer support and more love than I ever expected to receive.”

“My most memorable performance was of A Tribute to Liz Gordon. Also, I performed some duets with my singing partner, Mr Cliff Austin. Songs included We Believe in Happy Endings, Your Perfect Love, and How’s the World Treating You.”

“The highlight for me was the Sunday show singing country gospel. I sang my own song, Dear Lord, Lay Your Gentle Hands Down and then How Great Thou Art.”

“I received a standing ovation, and I have to say I was not expecting that. Also another special highlight for me was when I was performing Why Me Lord? with the beautiful Carroll Baker and the other talented performers.”

“This truly was a blessed highlight for me. Indeed, when I was standing beside Carroll, singing, that is the exact question I asked myself, why me, Lord?”

“A special word of thanks to Carroll, and her husband, John, for the kindness they showed me. I was treated like a country queen.”

“Also, for the great help, I received from Rhonda and Monica, while I was in Canada and to Richard also.”

“To Carroll’s guitarist and musical director, Ed Ham, for being so amazing. Thank you to my dear friend, Liz Watson – a  special lady. I have been invited back for the first year reunion tour next summer, which I am looking forward to.” she concluded.

In the coming months, the Co. Donegal native plans to return to the studio to record new original tracks and prepare for some country and gospel shows.

- Advertisement -
Previous article
‘Farmers want contracts at €7.50/kg for next spring to be profitable’
Next article
‘We have to ensure that smaller towns or in townlands can benefit from public transport’