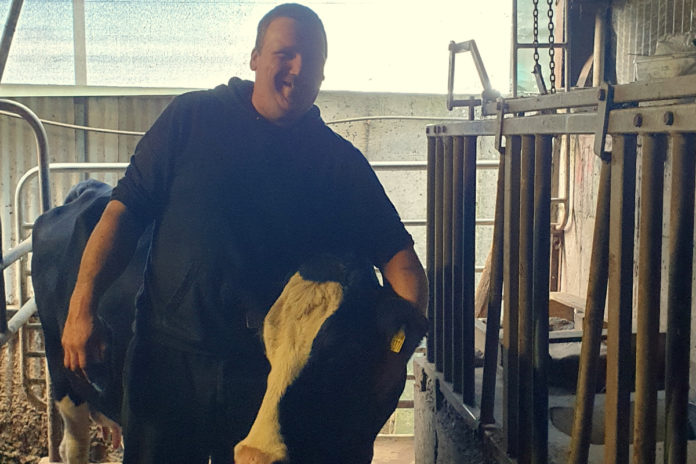 ‘I think dairy herds have become far too big’

Kelleher Family Farm is a diverse enterprise, being home to a herd of dairy and suckler cows and a flock of sheep.

34-year-old John Kelleher runs the farm, which comprises of 110-acres, with his father, Martin, mother, Eileen and younger sister, Anne.

The qualified agricultural mechanic farms on a part-time basis in Donoughmore, County Cork and owns his own garage.

“Farming is a family tradition; our farm has been in our family for five generations and was passed down from my granduncle, Neilus, to my father,” John explained to Catherina Cunnane of That’s Farming.

“We milk 50 cows through a six-unit parlour, which was built in 2003, and we haven’t expanded the herd. They run a herd of predominately British Friesian, Montbeliard and Montbeliarde-cross British Friesian cows which run with a Limousin bull.

“We have selected Montbeliarde-crosses for their dual-purpose abilities, mainly their excellent maternal traits. I find they have a high immunity against disease and rarely suffer from mastitis or lameness.”

“Montbeliarde-cross-British Friesians have a brilliant milk volume and good solids, making them a perfect fit for our farming system.”

“We don’t use AI and, therefore, decided to invest in a Limousin stockbull because the breed is easy-calved and there is a demand for selling cattle at 2-years-old.”

Females from top-yielding cow families, milking between 32-34-litres, are retained, with other heifers outsourced as replacements.

These are served when they are 24-months-old, with a viewing to calving at approximately 33-months.

“A heifer calving at 2-years-old is only about 80% of her mature weight and will continue taking nutrients so then the nutrients get split between her and the calf.”

“It creates competition for nutrients available for lactation and reproduction. From my experience, as 2-year-olds, they tend to wean lighter calves.”

“The main advantage of breeding at 24 months is mainly economic, not biological, in my view.” the fifth-generation farmer added.

In terms of their sheep enterprise, the 34-year-old and his family have 20 Charollais-cross ewes, which are bred to a Charollais ram to produce lambs with easy-fleshing abilities that are sold at marts.

“All ewes either have twins or triplets. We aim to lamb the flock in either April or May, so that once the lambs are strong, they can go outdoors,” added John, who also farms a mix of Simmental, Limousin and Hereford-cross sucklers.

“I love being outdoors and the sense of routine that is associated with farming; getting up early in the morning, milking cows, cleaning sheds and doing the usual jobs.”

“A major challenge is the price of milk being so low – it’s a case of doing a lot of work for such a small reward.”

John strikes a balance between assisting with the running of the family farm and his own business, which he established in 2012, after he completed his studies and served as an apprentice.

“I have been interested in farm machinery from a very early age. I used to watch my dad fixing tractors, machines, anything really. He can throw his hand at everything and from there, I took an interest too.”

The first tractor he purchased, is still used on the farm to this day. The 185 Massy Ferguson was sized, dilapidated, and was destined for export. “Every nut and bolt have been opened on that tractor and she runs like a dream.”

“When working on the farm as a family, I think it makes things easier, with each of us all playing a role in its operation.”

“My sister works full-time so she milks in the evening after work, while I milk in the morning before I start the farm jobs or my work in the garage.”

“Mam loves cattle so she will be there milking and dad will be cutting silage or fencing or whatever else is to be done. We cut, bale, and wrap our own silage, do our own ploughing, slurry, digger and land reclamation work.”

“For me, it’s all about time management. Sometimes, it feels like I could do with another 10 hours in the day and I’m lucky that I have a very understanding fiancée.”

“I love older machinery and it’s one part of what I do, but it is the aspect I love most. The older machinery is pure mechanics. All the problems in them are mechanical and you don’t have to plug them into a computer to figure out what is wrong with them.”

“It takes knowledge of the mechanical working of the machine and the know-how to fix it. I enjoy bringing them back to their former glory.”

John is equipped to fix all newer-type models of tractors too, but he explained this is not as straightforward as some may be led to believe.

“It can be quite troublesome, especially with wiring faults. It takes a lot of time finding the wiring faults rather than fixing them.”

“Welding is another string to my bow – it would amaze you what you can do and make with a flat piece of steel. I custom-make land levellers and transport boxes to order.” John added.

Looking ahead, John has no intentions to expand his enterprise, but has plans to focus on improving the farm overall.

This includes using sexed semen on some of the herd’s top cows and regenerating land to create “new workable” fields.

“I don’t know if the outlook for dairy farming is too great. To be honest, I think dairy herds have become far too big with no outlet for the end product, milk powder and a volatile market.

“If you can’t sell the milk and are making less, it won’t pay to milk cows no matter what you do.”