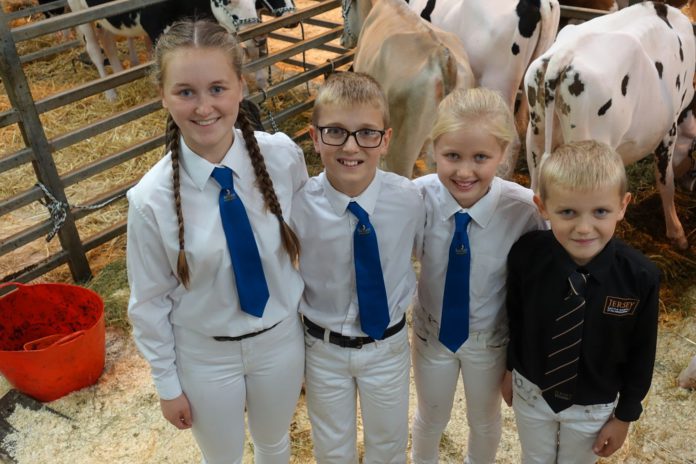 It’s September in the next episode of UTV’s Rare Breed – A Farming Year and the farming families are travelling to various arts and parts for shows and sales – The Greggs leave Co. Antrim and head to Tyrone,  and Jack Smyth does the opposite, leaving Tyrone for Co. Antrim. The Hodges are sorting the bees for winter and the McConnells are scanning cows for calves.

The Gregg family from Cloughmills are taking part in the Northern Ireland Calf Fair in Dungannon. Wallace and Joan have their hands full with four children and five calves! This is a popular competition showcasing the young handlers’ skills and knowledge. Eight-year-old Simon comments, “I’m nervous, and it’s fun at the same time.”

He sets a high standard, so can his siblings keep up? James and Isabella compete against Simon and 14-year-old Amy takes part in the last handlers’ class.  Wallace gets caught out, “I was away trying to get away from my children but they found me!”

September is a key time for selling sheep, so next, we head to Ballymena Mart, where Jack Smyth has travelled from Tyrone to sell some Suffolk ram lambs. He’ll find out if his strategies and planning in 2019 have paid off. He explains, “This type of sheep is not for the show ring, but for the sale ring.”

September also marks the start of the bee-keeping year. The harvest is over and outside Newtownards, Valentine and Chris Hodges are preparing the bees for the winter.

They have some unwelcome visitors in the hive in the form of varroa mites, which are very destructive to the bees, if left untreated.

The bees need to have a healthy winter, so Valentine and Chris are fumigating the hives to get rid of the infestation. They then secure the hives for the winter.

Finally in the Belfast Hills, Mark McConnell and his dad, Philip, are with vet, Cahir McAuley, who is scanning cows to see if they are in-calve. Mark makes notes of all details in his ‘wee pink book’ with a llama picture, which his girls bought him. He’s looking forward to plenty of calves in springtime.

UTV’s Mark McFadden narrates the series, which is sponsored by Moy Park and continues tonight (Thursday, March 5th) at 8.30pm on UTV.

- Advertisement -
Previous article‘Some people say we wouldn’t be Dalys if we weren’t dealing’
Next articleProfiles: 7 farmers who are ‘still feeding the nation’ during the Covid-19 crisis