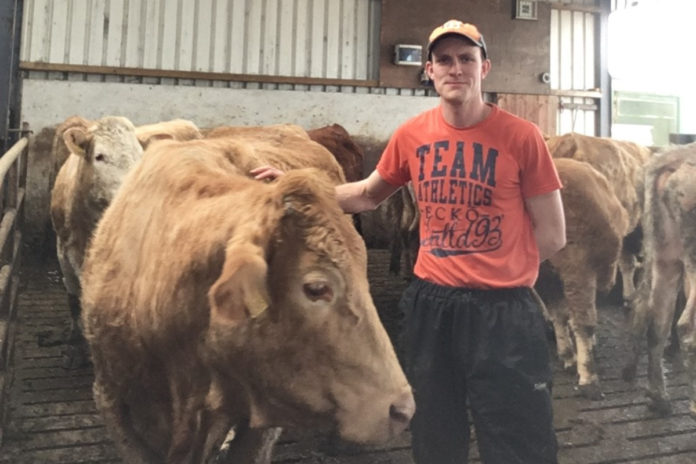 “For me, I know I could not sustain the farm without my job with Medtronic, it’s a no brainer.” those are the words of 27-year-old farmer, Melvin Smith.

He juggles a full-time position at the Galway-based company with the running of a 30-suckler cow herd with his father, Donal.

“For as long as I can remember, I have always had an interest in farming – it’s just something that came so naturally to me,” he explained to Catherina Cunnane, editor of That’s Farming.

“I am the second-generation of my family to farm this land – my dad grew up on a farm, but he set up this farm I have now.”

“He bought all the land we have now with the remainder rented/leased.” the young farmer explained.

In excess of 70% of the Ballygar, Co. Galway native’s herd consists of pedigree Charolais breeding females, while Simmental-crosses, Limousin-crosses and Hereford-crosses also dominate the pastures.

“Over the last number of years, I have tried to build up the suckler herd by buying-in springing heifers and also keeping my own homebred heifers for breeding.”

Donal purchased his first pedigree Charolais over fifteen years ago and the duo has placed their faith in the breed ever since. “From there, we have always bred them and built-up the pedigree side of the farm.”

“I used to bring bulls to shows but this took a lot of time, patience and commitment. I strongly believe in Charolais cattle – they’re quality stock and as my dad would say.”

The Smiths ran a Charolais stockbull up until last year but have since turned their attention to 100% AI.

The herd’s calving window has tightened over the last three years with over 50% calving from November to January; the remaining cows calve into July/August.

Progeny are sold as weanlings at Roscommon Mart normally at 7-9-months of age – depending on performance. The father and son team used to sell all cross-bred heifers, but now retain these for replacement purposes.

“I would ideally like to have all or near all calved in the calving pens during the winter months while there indoors.”

“I have calving cameras set up in the sheds which help in the aid of this and while at work, I can monitor the herd – especially cows coming into heat.”

Having a simple system and a supportive network are key for the young agricultural enthusiast to having a balance.

He usually leaves his house at 5am most days and does not return until 5-6 pm. “It’s great to get home and just go out onto the farm and just zone out from the world.”

“My dad is always on-hand whenever needed; he has the older generation experience, which is a great help for certain things.”

“My six brothers and two sisters all live locally and could get a call at any stage at night, if required to pull a calf. My uncle, John, lives nearby and I would be lost without him.”

“Medtronic Medical is a great place to work saving lives every day. It helps to have a second income to keep the farm ticking over financially.”

Melvin and Donal’s future plans include improving the quality of their cattle and expanding their suckler herd year-on-year following the construction of a new shed in recent years.

“I have no intention of changing or moving away from suckler farming. I just wouldn’t get the same buzz or trill from a drystock enterprise.”

“Farming is something you either love or hate and for me, it’s the love of it that keeps me interested.”

“I am optimistic that the suckler sector will always last, but I also believe farmers need to change with the sector and participate in every scheme.”